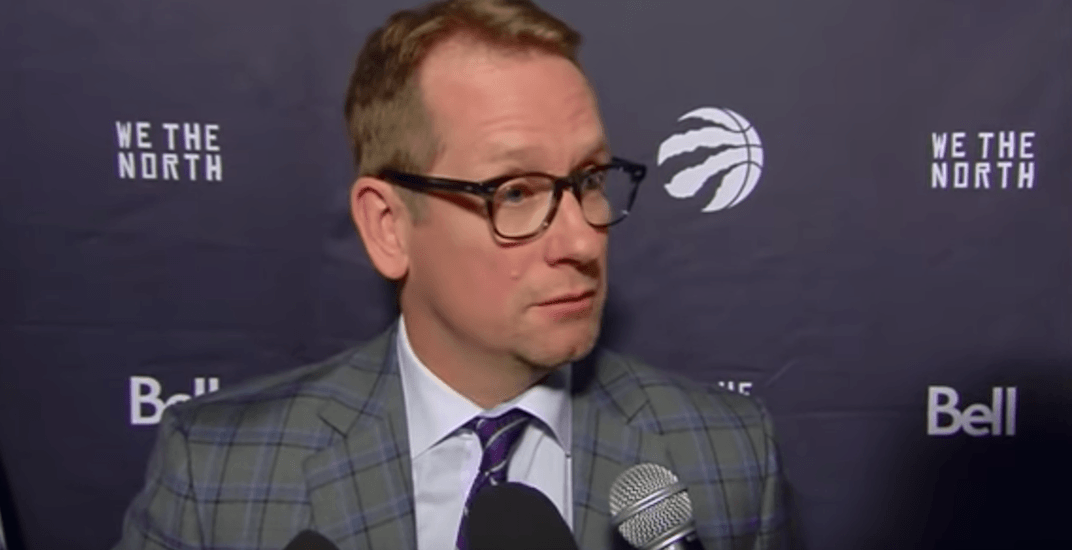 Someone’s not a happy camper.

Raptors head coach Nick Nurse was steaming mad after his team’s 95-86 loss to the Denver Nuggets on Sunday. Voicing his displeasure with reporters after the game, Nurse’s anger was directed at the referees for the lack of foul calls on his star player Kawhi Leonard.

Leonard, who scored a game-high 29 points, took just four free throws – two of which came in the final minute when the game was already out of reach.

“[The Nuggets] were the ones that were hitting, holding, cutting, grabbing, clutching,” Nurse said to reporters after the game.

“You can’t tell me that one of the best players in the league takes 100 hits in that game and shoots four free-throws, and they handed him two for charity at the end. So he was going to have two free-throws for the game with all the physical hits and holding, and driving, chucking, doubling, slapping, reaching, and all this stuff? But it’s been going on all year.

“I do not understand why they are letting everybody play one of the best players in the league so physically,” Nurse said.

“Tonight was a very severe case of a guy who was playing great, taking it to the rim, and just getting absolutely held, grabbed, poked, slapped, hit, and everything, and [the refs] refuse to call any of it.

“It’s unbelievable to me. It’s ridiculous.”

Kawhi on Nurse's comments re: officiating: "It's been like that all year, but in this era and how the game is and the rules are today, yes, I agree with him. It's been very physical. But I just go with the next play… I pride myself on just keep moving and keep going."

The Raptors haven’t had luck with the whistle this season, ranking 26th in the NBA in free-throw attempts. Given that they’re the top team in the league, you’d expect teams to be forced to foul them more often.

While Leonard didn’t appear to get the benefit of the call in Denver, he usually goes to the free throw line with regularity.

Leonard averages 6.8 free-throws a game, ranking 10th best in the entire league. He also ranks in the 88th percentile for fouls drawn on shot attempts, and in the 95th percentile in non-shooting fouls drawn, demonstrating that he’s one of the best at his position in getting foul calls.

But perhaps they could be calling more.

Yea, this has less to do about this game and more of a trend for the entire season. Kawhi has gotten so strong this year, I think it's tough for officals to spot the fouls because he absorbs contact so well

Leonard is so strong that he’s able to absorb a lot of contact, shrugging off defenders when he makes his move. Unless it’s obvious, his strength gives the perception that physical play doesn’t affect him offensively.

The lack of foul calls against the Nuggets was only part of the reason for the loss though.

Toronto struggled to defend the inside, giving up 44 points in the paint. They also turned the ball over 12 times, translating to 15 points off turnovers for Denver.

Additionally, the Raptors missed a number of wide-open looks.