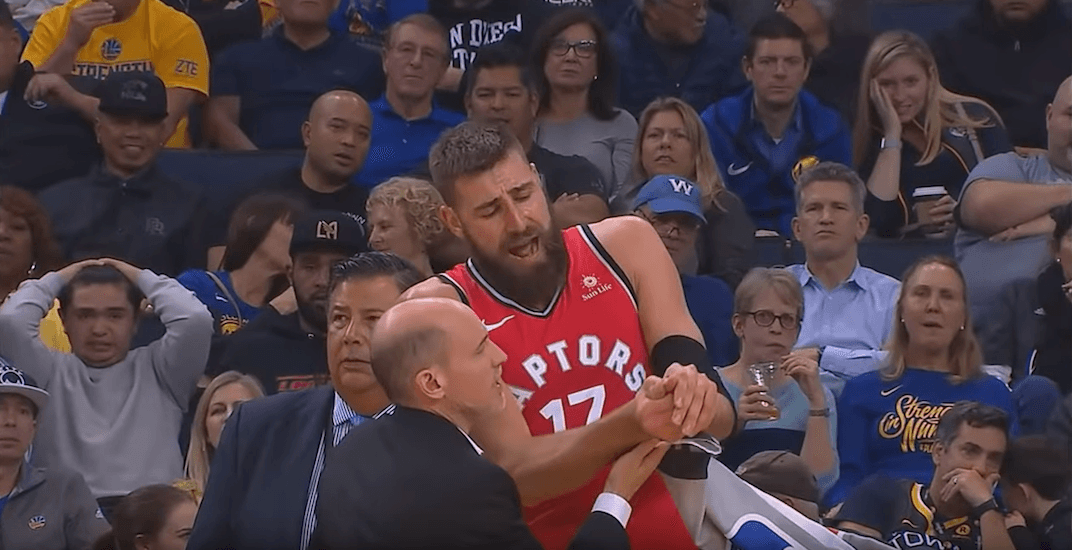 The Toronto Raptors will be without Jonas Valanciunas long term, after the 7-foot centre suffered a dislocated left thumb on Wednesday.

Valanciunas was injured by Golden State Warriors forward Draymond Green during a post up play during the second quarter of the Raptors’ emphatic 113-93 win over the defending NBA champs.

Green, who somehow wasn’t called for a foul on the play, clearly made contact with Valanciunas’ hand as he went up for a shot. The Lithuanian was in obvious pain, yelling as he clutched his hand.

Valanciunas underwent surgery at Stanford Medical Center in Palo Alto, California, the Raptors said on Thursday. His thumb was relocated and damage caused by the dislocation was repaired. Valanciunas will wear a cast for four weeks, at which time his condition will be updated, says the team.

In response to the injury, the Raptors have called up Canadian big man Chris Boucher. Boucher is fresh off a Raptors 905 record 47 points scored on Wednesday.

The Raptors sit alone in first place in the NBA this season, with a 23-7 record. Valanciunas, who hasn’t yet missed a game, is averaging 12.8 points, 7.2 rebounds, and 18.8 minutes.