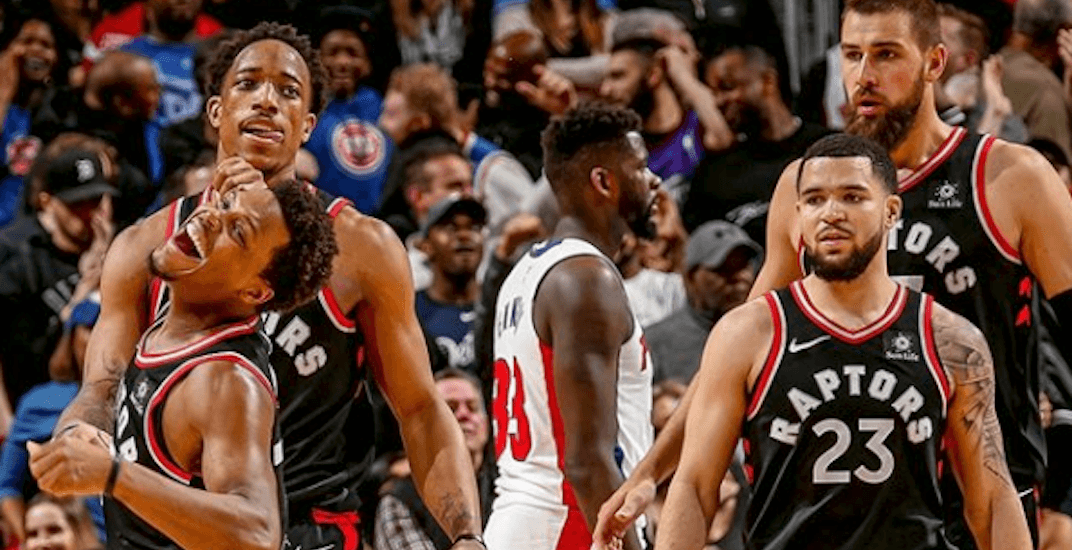 Canada is theirs for the taking.

After clinching a playoff spot on Wednesday – the first team in the NBA this year to do so – the Toronto Raptors are poised for a long postseason run.

While they went to the Eastern Conference Finals in 2016, a run this year would be different.

Nobody believed Toronto could beat the Cleveland Cavaliers back then – and taking two games off LeBron James’ team was seen as a huge success. A year ago, the Cavs looked like they belonged in a different league than the Raptors, sweeping them in four games.

But that was then and this is now.

Cleveland has taken a step back and the Raptors have taken a huge leap forward.

The Raptors are playing a better team-game than ever before. Look no further than the playoff-clinching shot in Detroit.

DeMar DeRozan, who’s getting support as an MVP candidate this season, had a chance to score the game-winning bucket. Instead, he (smartly) dished off to a bench player.

It was one thing for DeRozan to pass off to Fred VanVleet, it’s another for the second-year guard to drain the long-range jumper like Robert Horry in his prime.

And that sort of typifies the season so far for Toronto.

They can beat you in different ways.

The days of clearing the floor for DeRozan or Kyle Lowry and hoping they can put the team on their backs are over.

DeRozan has been great, but he hasn’t had to do it alone.

If the Raptors, who currently have a 2.5-game lead for first in the East, can translate their success into the playoffs, there’s potential for them to truly become ‘Canada’s team’ in a way they’ve never been before.

Vince Carter was fun, but with the Grizzlies still in Vancouver, the country was divided. The Chris Bosh era didn’t capture anyone’s imagination.

The Raptors have made strides into becoming a ‘national team’ of sorts in the past few years. ‘We the North’ has been a wildly successful campaign, and holding training camp in British Columbia the past few seasons has helped. As has hosting preseason games in different Canadian cities.

The enthusiasm which they’ve been met with in cities across Canada proves that the Raptors are starting to become like the Blue Jays in this country. What they’re missing, is a seminal moment.

They need those types of experiences to turn casual fans outside of Ontario into Raptors fans for life.

Now, with the best team in franchise history, they’ve got a wonderful opportunity to take hold of the nation.

A Conference Finals matchup against Boston or Cleveland would likely topple Canadian ratings records for a Raptors playoff series. An appearance in the Finals would take it a step further.

First things first though, the Raptors need to hold on to first-place in the Conference over the final 18 games. They need to take care of business in the playoffs.

Do that, and the Raptors will truly be ‘Canada’s team.’