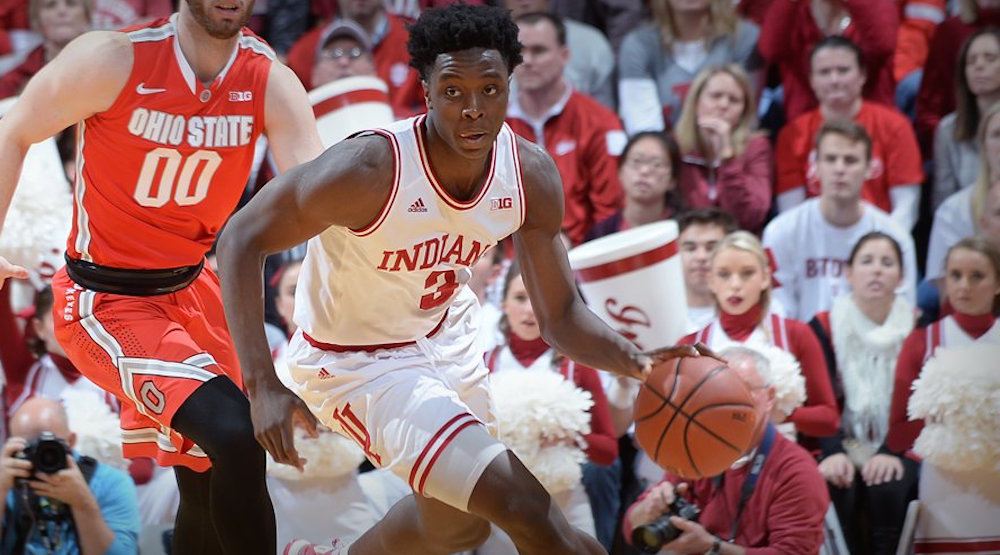 “And with the 23rd pick in the 2017 NBA Draft, the Toronto Raptors select, OG Anunoby, from Indiana University.”

Anunoby missed his last 15 games for the Hoosiers after tearing his ACL, an injury that will keep him out of basketball action until November.

Despite the setback to start Anunoby’s rookie season, the SF/PF may end up being the steal of the draft. Raptors’ president, Masai Ujiri, was lucky in selecting Anunoby at 23rd, who was ranked 14th among the NBA Draft’s top 100 prospects.

Here’s why Toronto Raptors’ fans should be very excited about their first round draft pick:

Selecting a player with an ACL injury to start his pro-career is a scary and very risky pick.

However, Anunoby has just as much potential as the top-1o prospects, and one of the best players in the draft when healthy.

The native of Jefferson City, Missouri is one of the best athletes in the draft, with an incredible 7-foot-3 wingspan, and an NBA-ready body at 6-foot-7, 230 pounds.

Most young players in the draft aren’t capable of contributing to winning right away. Anunoby, on the other hand, will have the athletic edge to match and compete with the speed of the NBA game.

Anunoby is known for his strong work ethic and motor, which bodes well for the culture of the organization.

It might not be too far off to call Anunoby one of the best defenders in the draft, if not the best.

Considering his physical stature and athleticism, Anunoby has every tool in the arsenal to be a defensive stopper at the NBA level.

In today’s NBA game, versatility is gold, and Anunoby can guard one through five, defending the opposing team’s best perimeter player, while holding his own in the interior.

Anunoby’s motor was also on full display with his rebounding — averaging around 8.0 rebounds a game per 40 minutes (5.4 rebounds per game).

Anunoby is arguably the best above-the-rim finisher in the draft, and one of the best in attacking the rim.

He shot a solid 70.1% on two-point field goals, mostly coming from penetrating towards the rim. Anunoby has the ability to work within the post, blow past defenders on dribble-drives, and can absorb contact and still finish around the basket.

Anunoby might not be a great three-point shooter, but he’s more than capable, especially in catch-and-shoot or pick-and-pop situations — averaged 1.3 points per possession on catch-and-shoot jumpers (59 field goal attempts).

He averaged 36.5% from the perimeter in his two-year career with Indiana, and at times shot above the NBA three-point line.

Drafting Anunoby adds to the Raptors’ plethora of young, potential talents — now with 10 players who are 25 or younger, with eight of them under a rookie or minimum contract.

The Raptors can continue to improve the roster to compete for a championship, while developing their young talent to eventually fill those roles in the future.

The selection of Anunoby brings roster security in case PJ Tucker and the Raptors do not come to a deal, also making DeMarre Carroll available in any trades for cap relief or as an asset in a much bigger deal.