Ed Sheeran, the hottest ginger to emerge from the UK since Prince Harry, returns to Vancouver for the fourth time in as many years on Friday night. His latest album, X (pronounced “multiply”), was the only disc to sell a million copies in both the United States and in England in 2014, and tickets for the North American leg of his world tour are pretty much sold out.

As indicated by our setlist preview, Sheeran is playing the hits from his first two studio albums plus a handful of covers, and rumour has it he’s doing them all acoustically. But before he takes the Rogers Arena stage, we’ve compiled a list of five random facts about the singer you might want to know going in. Nothing important – just useless trivia to impress your friends and annoy your co-workers with. Ready?

What do Albert Einstein, Sadaam Hussein, Charlie Chaplin and Ed Sheeran have in common? Well, they all have last names that end with an ‘n’, and they’ve all been immortalized as wax figures by Madame Tussauds. In May, Sheeran attended the unveiling of his statue in New York and was taken aback as to how eerily similar the two looked standing next to each other.

“It’s so f***ing weird! They’ve even got my lazy eye in…it’s kinda pointing that way,” the singer said upon closer inspection of the figure. Sheeran was definitely impressed with one aspect of his doppelgänger though – he posted a selfie with the waxwork on Instagram and captioned it with “he didn’t say much, but he’s got a bulge so it’s all good.” In case you were wondering, both Sheeran and the wax dummy wear size 10 UK shoes. 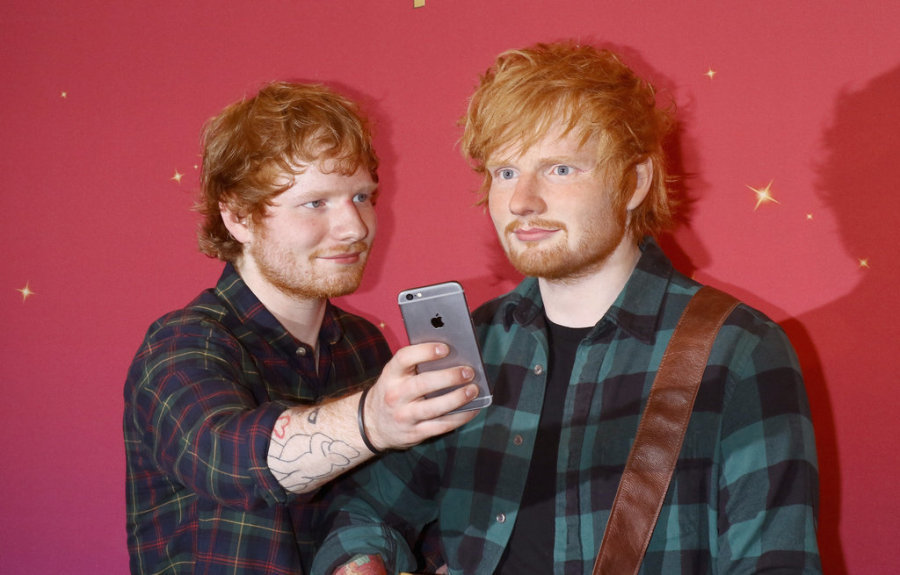 2. With help from Slim Shady, you too can have a football team.

Earlier this month, Sheeran received an award at the American Institute for Stuttering Gala in New York. The singer has been very vocal about his stuttering issues as a child and had some inspiring words for the kids attending the benefit. “Embrace your quirks. Being weird is a wonderful thing…I have a f***ing football team now, that’s pretty cool!” Sheeran told them.

As for conquering his stutter, the singer turned to rap music, specifically Eminem, when speech therapy didn’t work. “My dad bought me The Marshall Mathers LP when I was nine years old,” Sheeran explained. “I learned every word of it, back to front, by the time I was ten. He raps very fast and melodically and percussively, and it helped me get rid of the stutter.” Sheeran continues to be a hip hop fan and often covers Blackstreet, Drake and 50 Cent at his live shows.

Speaking of that American Institute for Stuttering benefit, Sheeran performed his hit “Thinking Out Loud” at the event to huge cheers. But when the audience chanted “More!”, the singer shocked everyone by donating an additional $20,000 to the initiative on the spot. The generous move came as no surprise to Sheeran’s fans though, as he often contributes his time and his talent to various charities including No Going Home and the One campaign.

Two weeks ago, Ed participated in a Q&A before a concert and was asked by an 11-year-old girl to name his favourite charity. After the singer explained that his mother works for East Anglia Children’s Hospice in the UK, the young fan gave Sheeran £25 of her own money to help the cause. In return, Ed gave the little girl 2 Canadian $100 bills from his own pocket to donate to the charity of her choice (she chose the Salvation Army).

4. He has as many bad tattoos as he does bad-ass ones.

Ed Sheeran estimates that he has over one hundred tattoos, and while some pay tribute to his family and his career milestones, others are, well, kinda lame. In addition to Pingu and Puss N’ Boots from Shrek, the singer has the word “Prince” tattooed on his left arm to honor his favorite tv show “The Fresh Prince of Bel-Air”. Sheeran’s other tattoos include a teddy bear, a tea cup, a snowflake, a maple leaf, a rose, a kiwi bird and a Heinz ketchup logo. The guy apparently loves the stuff and once tweeted “No one is too good for ketchup. Ketchup is too good for you.” 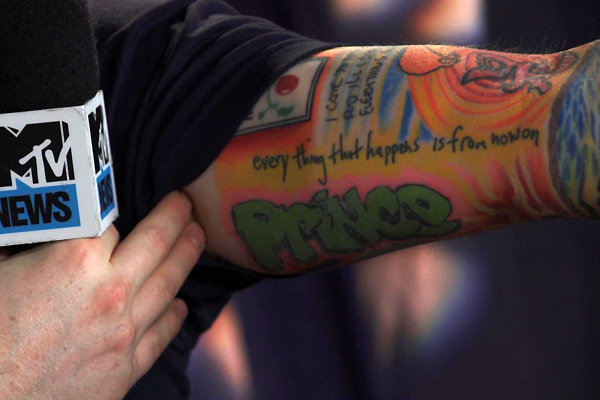 5. He would do anything for love, but he won’t do that.

Sheeran is a hit with girls (and lots of boys) of all ages and was made blatantly aware of that fact at a recent concert in San Francisco. A woman approached the stage and asked the singer to be her 9-year-old daughter’s first kiss. When Sheeran politely declined the mother’s bizarre request, she persisted, explaining that country singer Carrie Underwood had kissed an 11-year-old boy at a concert the week before.

The “Don’t” singer explained his decision to Entertainment Weekly saying “If Carrie Underwood kisses an 11-year-old boy, he goes into school the next day and they go ‘Oh, you absolute lad!’ If a 9-year-old girl goes into school and goes ‘I got kissed by a 24-year-old yesterday,’ police are being called, you know?”

Not many tickets are left for Sheeran’s show at Rogers Arena, but try your luck here. As you can see by our setlist preview, Sheeran has an epic night in store for his “Sheerios” (yes, his fans really call themselves that). Be sure to check Vancity Buzz on Saturday for my photos and review of the show. 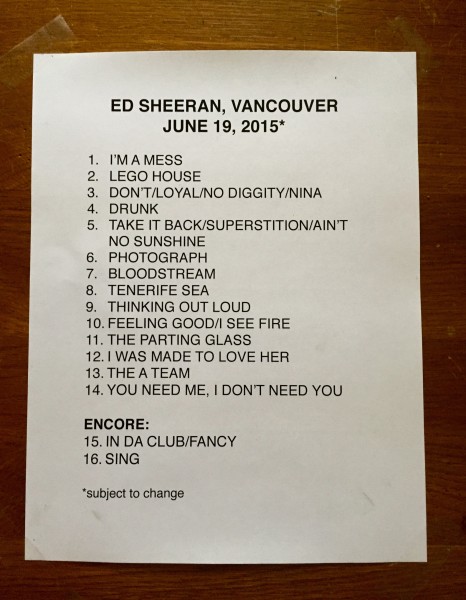