Vancouver’s Rainmaker Entertainment has some big promises to keep in the coming months. Their movie adaptation of Ratchet & Clank announced some big voice talent draws recently, and that TV reboot of ReBoot is just around the corner.

Ratchet & Clank, in case you’re not in the know, is a Sony Playstation exclusive that has actually managed to stay exclusive to the console. As such, it has a niche but loyal fanbase that has seen the franchise through numerous titles – and now a movie adaptation by Vancouver’s own Rainmaker. Ratchet & Clank is numbered among one of Sony’s most popular franchises, selling over 26 million copies worldwide to date.

Ratchet & Clank tells the story of two unlikely heroes as they struggle to stop a vile alien named Chairman Drek from destroying every planet in the Solana Galaxy. Along the way, they will learn about heroism, friendship, and the importance of discovering one’s own identity.

Launching alongside a new Playstation 4 game next year, the animated movie has announced some heavyweight voices: 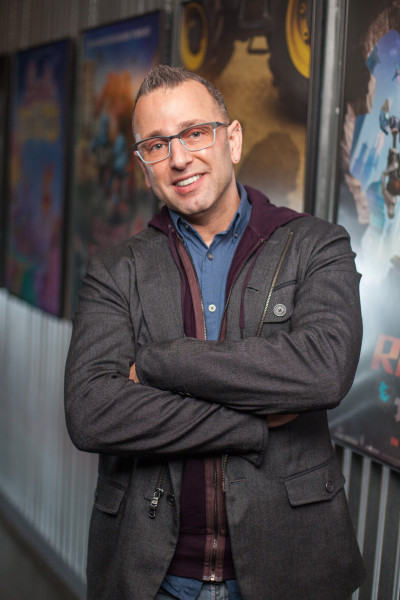 I sat down with Michael Hefferon, Rainmaker’s President and Chief Creative Officer, to ask him about the process of getting from the days of Mainframe Entertainment to now.

Back in 2013, Rainmaker was looking at ways of shifting the company from service-based to IP ownership. Secured through partners Blockade Entertainment, Hefferon cites that acquiring the Ratchet & Clank movie rights was really due to three things: branded franchise content, a fantastic property, and a thriving fanbase. He’s very proud of their 1.5 million views on one day for the launch trailer, and an overall 95% approval rating since then.

I asked him about the big step as a Canadian studio into developing feature films. “Roughly 30% of the movie is made in China. China is the second largest box office outside of North America, and a strategic place for the film.” It seems to be a good move for Rainmaker, as is working closely with Ratchet & Clank creators Insomniac Games to ensure authenticity of the film.

Rainmaker, however, has also learned important lessons since the original Mainframe. “A lot of the industry started out in the service business, but we’ve proven that BC has moved beyond that, to become some of the greatest creators of intellectual properties that are now seen all around the world.” The industry is now less cyclical, and less reliant on big fall broadcaster deadlines – Netflix and other streaming services have really made production a year-round pursuit. “Vancouver’s weathered the dips. From around the world, people are seeing our city as a real opportunity base for talent.”

It’s a fine time for the company, now employing about 350 across Rainmaker and Mainframe – the branch working on the much-anticipated ReBoot remake.