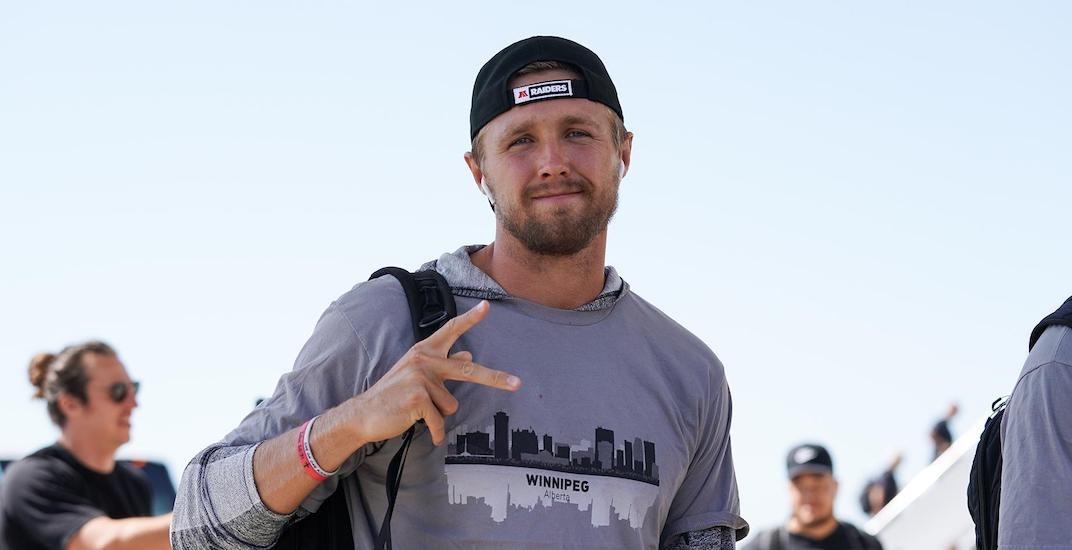 NFL players arrived in style for the league’s first-ever game in Winnipeg.

Members of the Oakland Raiders and Green Bay Packers touched down in the Manitoba capital on Wednesday, ahead of Thursday’s preseason game at IG Field.

The biggest star to arrive was Packers quarterback Aaron Rodgers, who arrived wearing a Canadian tuxedo complete with a bolo tie.

Excited to be playing north of the border, placekicker Daniel Carlson stepped off the plane wearing a Jets t-shirt, while punter AJ Cole rocked a Winnipeg t-shirt.

Canadian football fans were quick to point out the error…

Welcome to Winnipeg, Alberta. You're gonna love it here. pic.twitter.com/e6zVY9XoiS

I may consider going to the football game if the Winnipeg, Alberta shirt was available in the merch area

Even the CFL’s Winnipeg Blue Bombers were chirping the poor guy, who was signed by the Raiders as an undrafted free agent out of NC State in May.

We can’t wait to visit you in Oakland, Nevada 😏

…while the Winnipeg Jets offered to help…

thanks for having us!

So where did Cole get his shirt from? Amazon, of course:

if amazon prime counts as a cheap flea market, guilty as charged lol

Like a good honorary Canadian, Cole apologized for his faux pas.

“Apologies to the citizens of Winnipeg, Manitoba… just a kid from Atlanta, Florida playing football in Oakland, Nevada with a low geography IQ,” he said.

apologies to the citizens of Winnipeg, Manitoba… just a kid from Atlanta, Florida playing football in Oakland, Nevada with a low geography IQ @Raiders https://t.co/oh0i2tJbNR

Of course, this didn’t stop the chirping from Canadian teammate Luke Willson, who may have willfully allowed this whole incident to happen:

we played werewolf for 2 hours on the plane and you couldn’t save me from myself? you’re the one who should say sorey!

Whatever the case, it looks like Winnipeg is excited to have the NFL in town — even if organizers priced most fans out of the stadium. A look at Ticketmaster shows there’s still a significant amount of empty seats for the game — despite the fact that organizers have slashed prices in an apparent last-ditch effort to boost attendance numbers.

Welcome to Winnipeg ⁦@Raiders⁩ Nation. Great to have you (and this incredible plane) in town. #Raiders #winnipeg #nfl #avgeek pic.twitter.com/aSICmFi3PZ

Thank you to all the #Packers fans who welcomed us to Canada! 🙌🇨🇦#GoPackGo pic.twitter.com/B5xMubuhMl