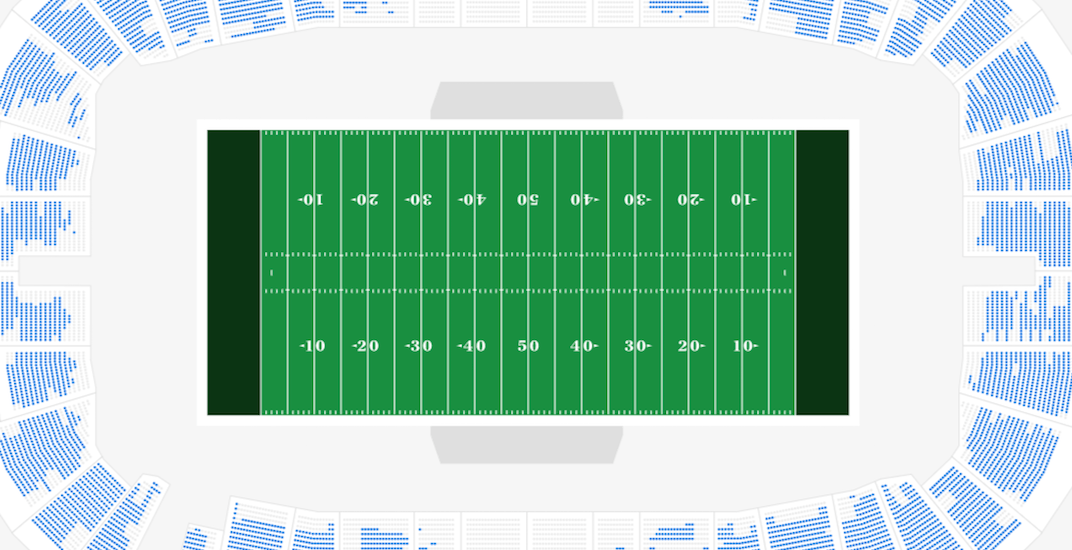 The decision to play an NFL preseason game in Winnipeg this summer caught a number of people by surprise.

A bigger surprise? The trouble organizers are having selling tickets for the event.

The Green Bay Packers and Oakland Raiders have a Week 3 preseason game scheduled for Thursday, August 22 at IG Field, the 33,134-seat home of the Winnipeg Blue Bombers.

Nearly two months after tickets went on sale, the vast majority of them still remain, as this screenshot we took from Ticketmaster illustrates (grey dots = sold, blue dots=unsold):

With just 15 days to go before the game, this could be a potentially embarrassing and costly event for organizers.

The Blue Bombers average nearly 25,000 fans per game, so there’s not a lack of football fans in the city.

Perhaps organizers should consider dropping the price for tickets. The cheapest available ticket still available is $169, for an upper bowl seat. Tickets range as high as $439.25 — which helps explain why so many good seats have been left unsold.

There’s no shortage of NFL fans north of the border, but there’s a limit to what people are willing to spend, particularly when it comes to the preseason. Fans in Winnipeg also have the option of making the seven-hour drive to Minneapolis to see the Minnesota Vikings play regular season games.