There’s this doom and gloom sentiment percolating around the Vancouver Canucks right now. Since November 1, their 8-11-3 record is 25th best in the NHL. The 19 points they’ve accumulated in that span is only one better than the New Jersey Devils, who just fired their head coach and traded their best player.

Despite the pessimism, there has been one constant. Rookie defenceman Quinn Hughes has been lights out, elevating his game with Alex Edler missing from the lineup.

If you Google the definition of “wunderkind,” you’re likely to see a picture of Hughes. Instead of actually testing that theory, check out these top five incredible facts behind the 20-year-old’s amazing rookie season, including his chance at making history.

5. Hughes is already an analytics darling

There was never much doubt about Hughes’s ability to produce offence, but there was a cautious curiosity about he’d handle defensive zone assignments.

Through almost a half-season of NHL hockey, it hasn’t been a legitimate concern at all, and the numbers reflect that of a player who’s been dominating possession.

I could watch Quinn Hughes break the puck out all damn day pic.twitter.com/NVzc5Ck7n9

Hughes ranks 14th with a 55% Corsi, up in the top-20 with the likes of Roman Josi, Kris Letang, and Dougie Hamilton. Only two of the other six Canucks regulars have a Corsi above 50%.

Another area where Hughes ranks highly: he’s 10th overall among NHL defencemen with an expected goals-for of 57.9%. It makes his 52% actual goals-for total look rather unlucky. Speaking of which…

The last section highlights how much Hughes drives play, but the fact is that he hasn’t actually produced that much at even-strength. His 1.05 points-per-60 at even strength isn’t bad for a defenceman (55th among 225 regular defenders), but for the amount that he creates at five-on-five, that number should be higher.

Considering his high number of offensive zone starts and the amount of scoring chances the Canucks create when he’s on the ice, Hughes’ even-strength production is bound to increase.

In comparison, Colorado Avalanche rookie defenceman Cale Makar, who plays on a good team and is on the ice for a lot of goals scored, sits third in the league among defenceman with 2.04 points-per-60. He’s not creating more than Hughes, but he’s in a better situation.

3. He’s already one of the highest-scoring rookie d-men in franchise history

The two best rookie defenceman in Canucks history joined the team during their first two years in the league. Dale Tallon posted 56 points in 1970-71, and Jocelyn Guervemont followed that up with 51 points in 1971-72. Hughes has a chance to best both of them, but more on that shortly.

The third-highest scoring defenceman in Canucks history was Dave Dunn, who had 33 points in 68 games during the 1973-74 season. 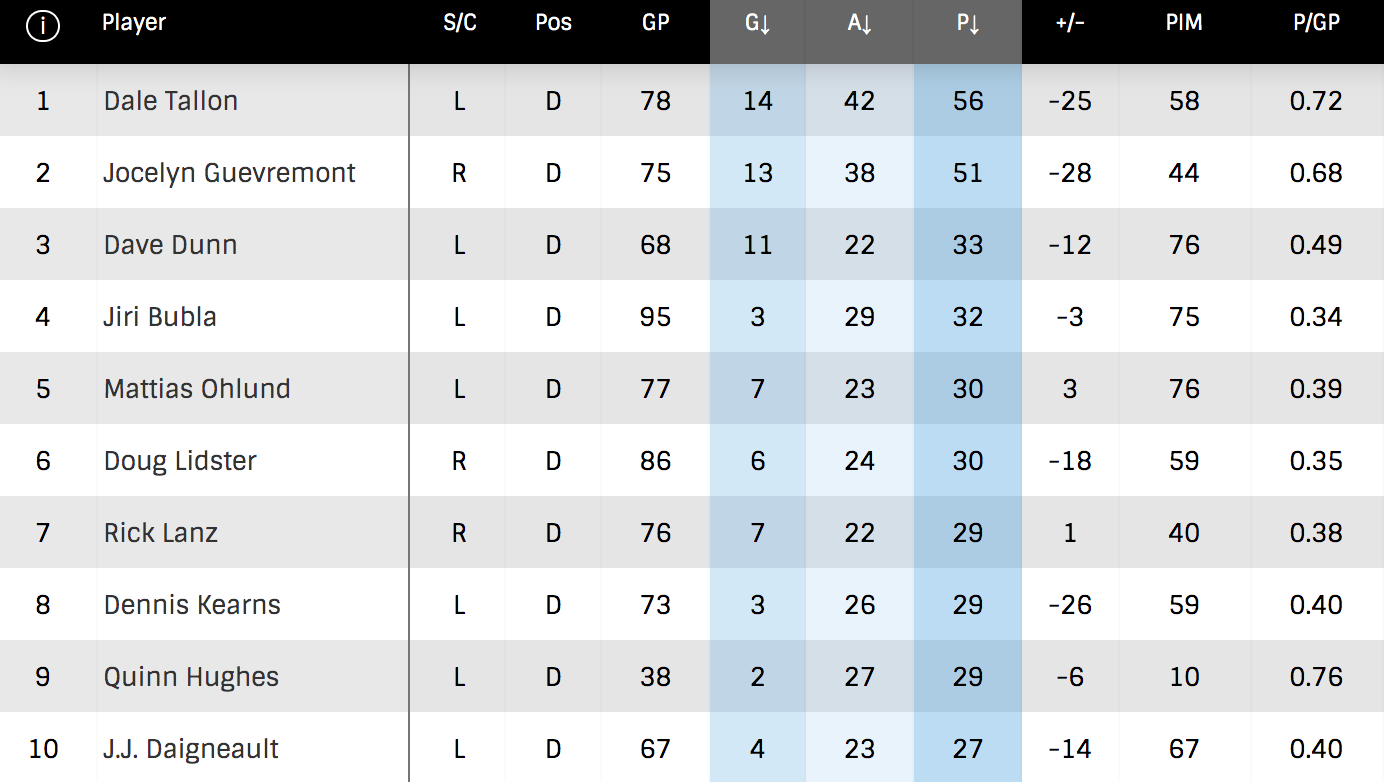 As of writing, Hughes has 26 points in 33 games. There are six games left in the calendar year, and seven before the Canucks hit the 41-game mark. Could Hughes punch his way into the top three prior to then?

2. Hughes could become one of the most prolific rookie defenceman on the power play… EVER

One franchise record that Hughes seems primed to smash is power play points from a rookie defenceman. He currently sits third at 14 points, close behind the two record-holders already (Tallon and Dennis Kearns have 17 power play points).

Hughes is on pace for 34 power play points. That will be a tough pace to maintain, but it would leave him tied for the third-best mark in NHL history with Phil Housley. Gary Suter of the Calgary Flames holds the all-time record, with 39 power play points back in 1985-86.

Statement. Made. Welcome to the Show, Quinn Hughes!

The Canucks power play has been excellent this season, sitting fourth overall in the league at 25.3%, and Hughes is a major reason why.

We’ve never seen a player quite like Hughes in Canucks history. He’s diminutive but he’s smart, slippery, lighting quick on his edges, and a wizard with the puck.

That’s highlighted by the fact that Hughes is on pace for 63 points.

Nevermind rookies, only two defencemen in the 50-year history of the Canucks have reached the 60-point plateau. Kearns had 60 in 1976-77, and Doug Lidster holds the franchise record with 63 points back in 1987-88.

To further put into perspective how amazing Hughes’ performance has been, he’s on pace to do something that only nine defencemen have done in NHL history: surpass 60 points as a rookie.

Even though Makar has led the rookie race most of the season, that shouldn’t take away from what Hughes has accomplished. He’s still a long way away from etching his name on the all-time lists, but his scorching start so far is remarkable in itself.