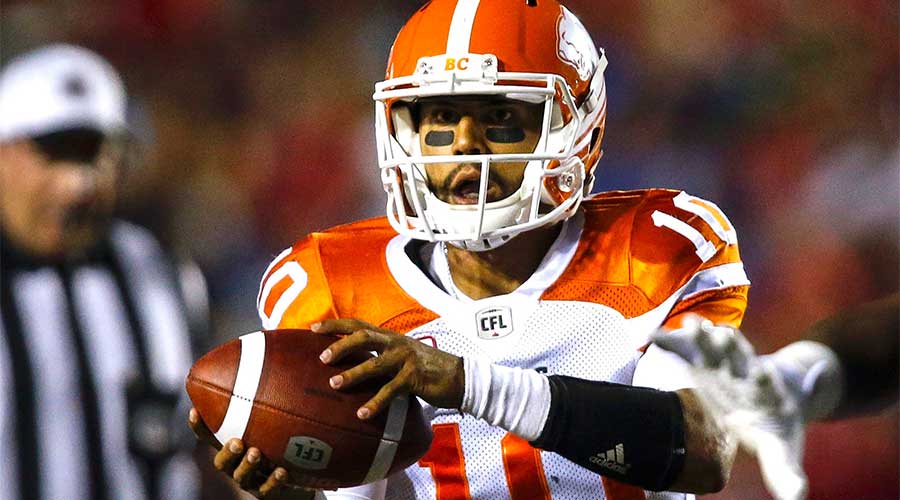 The BC Lions completed a sweep of their two-game Ontario road trip Wednesday evening squeaking out a 16-13 win over the Toronto Argonauts at BMO Field in Toronto.

The game was a defensive struggle that saw each team find the end zone just once with the rest of the scoring coming from the legs of Richie Leone and Lirim Hajrullahu.

Argos QB Ricky Ray, returning from a knee injury which caused him to miss three games, showed little sign of rust, connecting with Kevin Elliott on a 21-yard TD strike on his first drive of the game. The veteran pivot connected on 24 of his 29 pass attempts.

Jonathon Jennings wasn’t quite as sharp and faced a lot of pressure from an aggressive Rich Stubler defence. But the young pivot, who leads the CFL in fourth quarter wins, saved his best for last with a clutch drive resulting in the game winning field goal.

It was a character win for the Lions, their second straight on the road which brought their away record to 5-1. The Lions now sit at 7-3, the same amount of wins they had last season, and with the bulk of their remaining games at home, they’ve set themselves up well to possibly host a playoff game come November.

Let’s get into the Quick-6.

At first glance you would say that Jonathon Jennings wasn’t sharp, and there were multiple reasons for that, including poor decisions by him, a wind to contend with, and the fact that on multiple plays he was under instant pressure.

Since being inserted into the lineup three games ago, Levy Adcock has struggled to find his game at right tackle. On one play in the fourth, he was easily walked around by Shawn Lemon, who ate up Jennings on the sack. The Lions would love their free agent signing to step up and take the position, but Antonio Johnson played well there the first four games and the Lions may want to take another look at him.

To the offensive line’s credit, they stepped up on the final drive both on run blocking and pass protection, and gave Jennings what he needed to go to work in clutch time.

In a game that was defensive battle, Solomon Elimimian broke a team record for tackles in a game with 14 on the night, the third highest tally in CFL history. He also added a sack and an interception to his stats line. The tenacious linebacker was all over the field and from everything we’ve seen so far, he’s showing no signs that the Achilles injury he suffered last season has slowed him down.

Richie Leone averaged 50.7 yards per punt, but the real story was he went 3-for-3 on field goals when the Lions really needed him. The longer this game went the more you knew the winning points were likely to be decided by a field goal, and Leone delivered in tricky wind conditions.

That’s a good sign for the Lions, who are going to need Leone to be more consistent down the stretch. The Lions are just 7-for-15 on two point conversions this season, and may be trying it more than usual because of Leone’s unreliable place kicking. This game could go a long way to getting Leone into a rhythm.

4. Jennings rises to the occasion again

By no means was this an offensive masterpiece by either team. It was more of a chess match of field position and two bend-but-don’t-break defences. While struggling to move the ball at times, Jennings also made some key throws to get the Lions into Argos territory, and also used his feet.

But once again with the game on the line, Jennings was able to reach down to put together a drive to win the game. It doesn’t always have to be pretty, but it was another experience building, character effort by the 24-year old quarterback.

There were still some iffy decisions and some overthrows, and he had some balls dropped by his receivers, but the poise that Jennings shows in pressure situations bodes very well for his future.

5. Another blow to the secondary

The Lions took a hit before the contest with an ankle injury to corner back Ronnie Yell who left the field under assistance on the warmup. He was also seen later wearing an air cast on the sideline. There has been no official word on the severity of the injury, but there were reports that Yell wanted to play. If Yell is to miss significant time, it would be the third major blow to the Lions this season, after already losing TJ Lee and Steven Clarke for the season.

To adjust the Lions moved Brandon Stewart to the boundary and inserted Keynan Parker at field corner.

The announced crowd of 17,509 sure made a lot of noise in the fourth quarter. You really have to hope that the city of Toronto can get on board with the Argos and that great football venue they have there now.

Next Game: Friday, September 9th, 7 pm versus Montreal at BC Place Stadium.