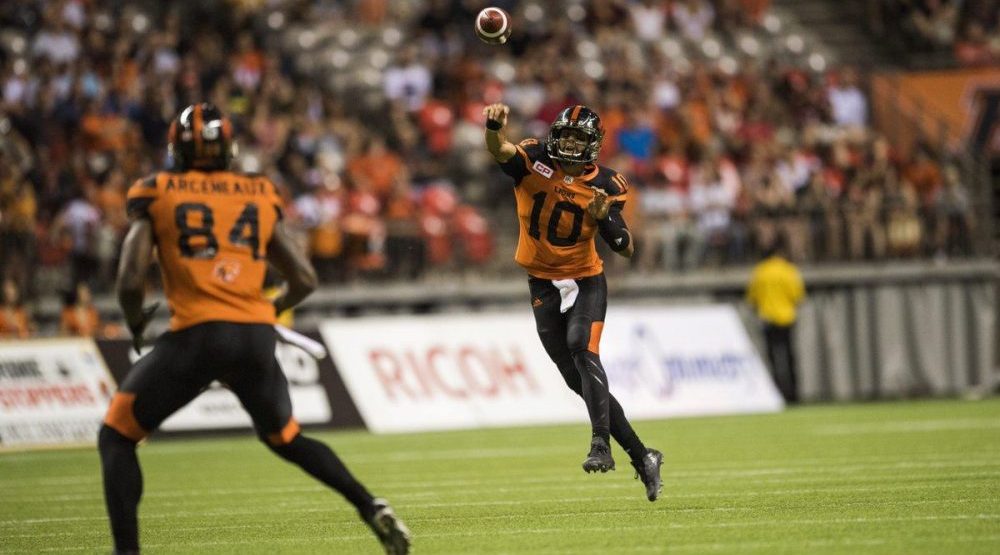 The BC Lions sure to seem to love these 4 pm Saturday starts at home, as they quickly took care of the Saskatchewan Roughriders, 41-18 the final score.

With the win in the last game of the CFL regular season schedule, the Leos have officially clinched a date next Sunday for the West semi-final against the Winnipeg Blue Bombers. That game, will be played right here in Vancouver.

Before we get set for that one, let’s dive deeper into Saturday’s contest.

Jonathon Jennings capped off his marvellous 2016 regular season, throwing for 302 yards and three touchdowns, with one lone interception. Putting on just another spectacular performance, Jennings easily surpasses 5,000 yards through the air on the season.

This is remarkable considering Doug Flutie, Dave Dickenson and Casey Printers are the only other QB’s in franchise history to do it.

Ten catches for 180 yards and two touchdowns…that has become the norm for Emmanual Arceneaux.

Arceneaux has become an absolute nightmare for opposing defenders when he’s in a one-on-one scenario. Manny finishes the season third overall in CFL receiving yards, and has easily had his best statistical CFL season in his six-year career.

With over 100 catches on the season, he is the first Leos wideout to do it here since Geroy Simon in 2006.

Paul McCallum was perfect on all of his PAT’s on the evening, and went 4-for-4 on field goals. Only one attempt was from 30+, a 44-yarder in the early stages of the third quarter, but it’s a good sign going forward.

McCallum brings a sense of confidence and comfortability on the field. He’ll be able to ease the anxiety that Lions fans have had to deal with all year long with punter at heart, Richie Leone.

4. Sinkfield provides a highlight of the night nomination

Give credit to Jennings for the beautiful arc and accuracy, but man, what a catch by Terrell Sinkfield.

5. Lulay gets some work in

Former Most Outstanding Player Travis Lulay played all of the fourth quarter in relief of Jennings, and completed 4-of-5 passes for 24 yards.

Doesn’t look like much, but this throw to Brian Burnham in the end-zone for seven gave me memories of 2011.

6. Best crowd of the season

This also gave me flashes of five years ago, when BC Place was roaring with noise.

Next Sunday at 1:30pm, the Lions host only their third-ever West-Semi Final at the dome, and it’s never been a better time to re-invest into the BC Lions’ atmosphere.

Get your tickets, and support this team, Vancouver. This is the most exciting brand of football that we’ve been a witness to in a long time.