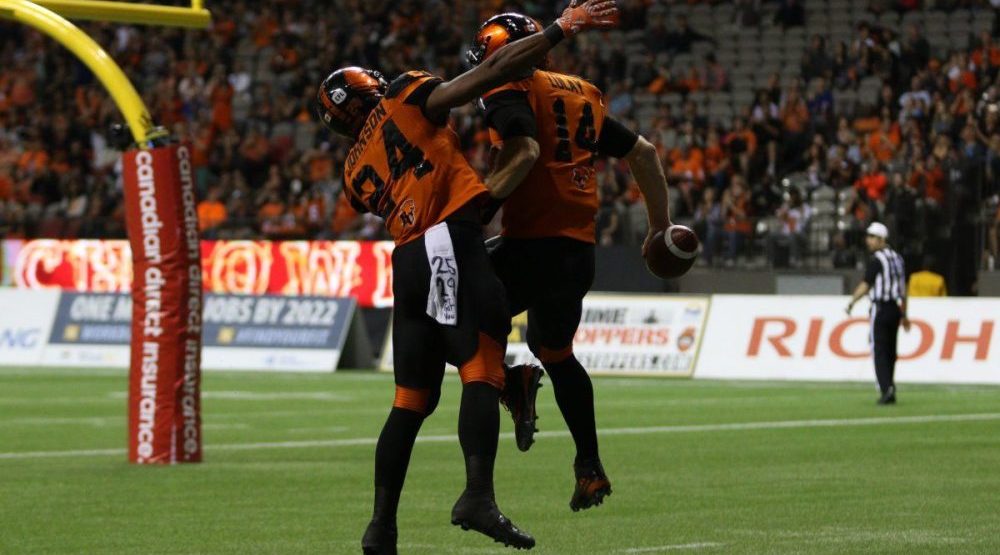 Make that three games in a row for your BC Lions.

On Friday night at the den, the BC Lions entertained their home crowd to great lengths, dominating both sides of the ball from the opening kickoff. The Leos held control the rest of the way through, leaving Montreal yet again wondering what has gone wrong in the post-Anthony Calvillo era.

Jonathon Jennings threw for 341 yards and one touchdown, and Jeremiah Johnson took advantage of the O-line’s phenomenal play rushing for 159 yards on 16 carries, the highest total in the CFL this year.

The re-addition of right tackle Antonio Johnson to the starting lineup really helped, as Johnson and even Chris Rainey (in limited carries), had great holes to take advantage of all night long on the ground. All in all, it was a fine victory for BC.

“The Gatorade tastes a lot better when you win. The beer in the bye week will taste a lot better also” 🍻 ~ Mike Edem pic.twitter.com/D6IXi6ubsg

Here’s your Quick Six for Week 12.

After BC’s defence forced Montreal to a two and out on the Alouettes first possession of the game, the Leos offence marched right down for a touchdown, needing only three plays. The touchdown was capped off by a sweet 25-yard pass from Jennings to the ‘Manny Show”, for a quick 6-0 lead.

(Yes, the Lions went for it on the two-point conversion on the next play and were successful)

It looks like Wally Buono’s plan of switching up the starter on frequent occasions when it comes to the running game, is paying off.

Last week Anthony Allen got the nod, and this time around, a fresh Jeremiah Johnson had his best game in not only a Lions uniform, but his CFL career.

This was one of Johnson’s three touchdowns on the night, a 26-yard romp into the Alouettes end-zone for six.

As other teams’ starting tailbacks are wearing down each week from the hall of an 18-game season, the Lions are playing it smart, keeping both of their featured running backs healthy and fresh with equal opportunity.

Allen is a more North-and-South power back who will run the ball down your throat, while Johnson is known for his shifty side-to-side style of running. A compliment of both is really nice to have, keeping defences honest when the opposition game-plans against them.

The worst attended game for the Lions comes with the team coming off two huge road wins, carrying a 7-3 record. What more can sports fans in Vancouver ask for?

I understand that the Lions have been inconsistent at home in 2016 and have had a few share of stinkers at the dome. But with the Whitecaps being a complete disappointment this season and the Canucks expected to finish in the basement of the NHL standings again this year, is there no better time to support Vancouver’s only winning team?

4. “The worst teammate ever”

Duron Carter returned from his one-game suspension last night after bumping into Ottawa Redblacks’ head coach Rick Campbell all the way back in Week 2. The sit-out from last seemingly didn’t stop his immature antics tonight.

If you’ve followed the CFL for the past few years, you would know that Montreal’s Duron Carter is arguably the most talented wide receiver in the league, and also the dumbest off of it.

It’s really too bad that players with so much talent like Carter continue to hinder themselves from reaching their true football potential.

Bryan Burnham has easily been the most surprising player for the Leos this season. Burnham caught six passes for 138 yards tonight, and continues to be right up there in CFL among the top 10 in receiving yards.

During the game, Cam Tucker outlined how good Burnham’s breakout season has been compared to 2015.

Alex Bazzie picked up another sack, the 10th of the season for himself, which is a league-high.

The former Marshall standout has now tied his career high in sacks, and is well on his way to breaking his individual CFL record. Only compiling a total of eight as a member of Jeff Tedford’s doghouse last year, Bazzie totally seems like a different player out there, a complete force in the trenches that no opposing offensive lineman can seem to handle entirely on their own.

The 8-3 Lions will receive their second and last bye week of the year, more than enough time to get ready for their first match this season with Edmonton on September 23rd at Commonwealth Stadium.