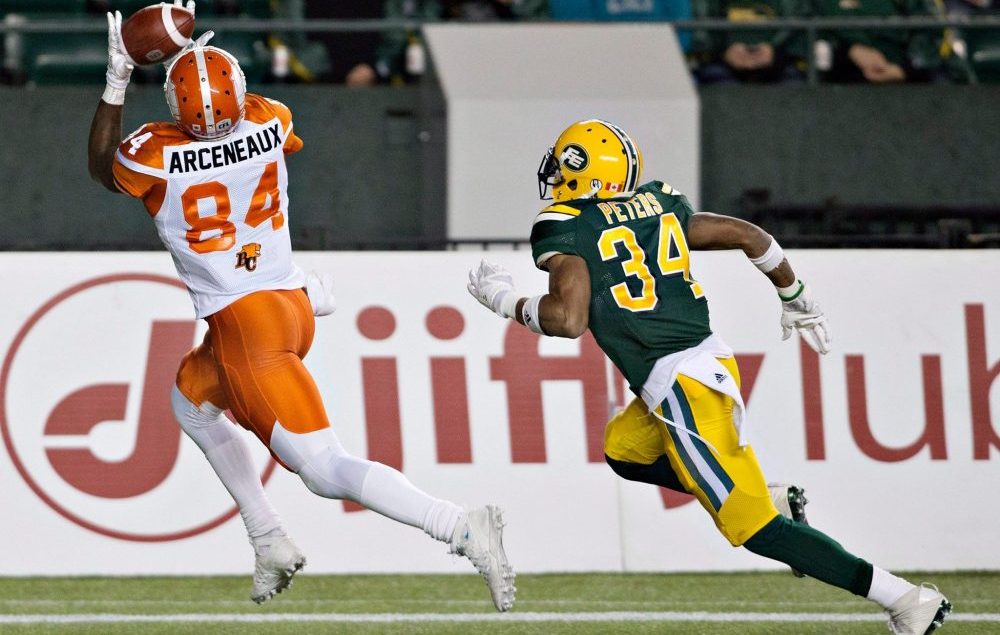 The BC Lions lost 27-23 to the defending Grey Cup champs on Friday night in Edmonton.

BC held a 14-0 lead in the second quarter, but eventually only led by a single point at the half. The Lions offence fell cold in the second half, and could never really make anything happen at a consistent clip.

Jonathon Jennings completed only 56% of his passes on the night, while opposing quarterback Mike Reilly continued to sling the football at will, with a completion percentage of 77.4%.

With that said, here’s the Quick-6.

Emmanuel Arceneaux had quite the first 30 minutes. Arceneaux caught five passes in the first half for 140 yards, which included the first score of the game.

The second half was different story for the ‘Manny Show’, however. Arceneaux caught only two passes, both coming in the fourth quarter for 24 yards.

Jeremiah Johnson only ran the ball eight times on the night, averaging 5.1 yards per carry. I’d like to think that down the road Leos offensive coordinator Khari Jones will give his running backs more reps, especially when they have guys like Anthony Allen and Chris Rainey who can create a triple-threat attack in the backfield.

The Eskimos ran the ball 23 times tonight, pretty rare in what’s become a mainly passing-only league. Second-year CFL RB Shakir Bell got the nod for the Edmonton, and accounted for 108 yards on the ground.

One more thing to keep in mind is that running the ball is a great weapon to tire out a defence’s front-7. BC’s felt the wrath in this one.

Like Arceneaux, Jennings had a great first half, and looked destined for an out-of-this-world stat-line by the end of the night. Not the case.

Jennings really struggled in the second half, throwing zero touchdowns and two interceptions, both questionable decisions by the former standout at Saginaw State.

I’ve said it before, and I’ll say it again. This will only help the young QB going forward, and it’s only his second season in the league. The kid will be alright.

During his tenure as a coach with the Leos, Mike Benevides always had odd play-calling signals up his sleeve.

Now in his first year as a defensive coordinator with the Eskimos, this particular one was especially…odd.

If there’s one thing that we found out about these two teams it’s this: they don’t like one another.

Both squads were rough all night, jawing back and forth.

At one point, Chris Rainey got into it with an Eskimo player after a late tackle on a kickoff return. It will be interesting to see these two clubs battle again on October 22nd at BC Place.

Adam Bighill was savage last night, tallying 12 defensive tackles and a sack. His teammate, 2014 MOP Solomon Elimimian, had 10 tackles of his own as well.

With their three-game winning streak ending last night, the now 8-4 Lions will look to get back on track when they play host to the 6-5-1 Ottawa RedBlacks at BC Place on Saturday. Ottawa is coming off a 29-12 victory over Toronto, and currently sits atop the East Division.