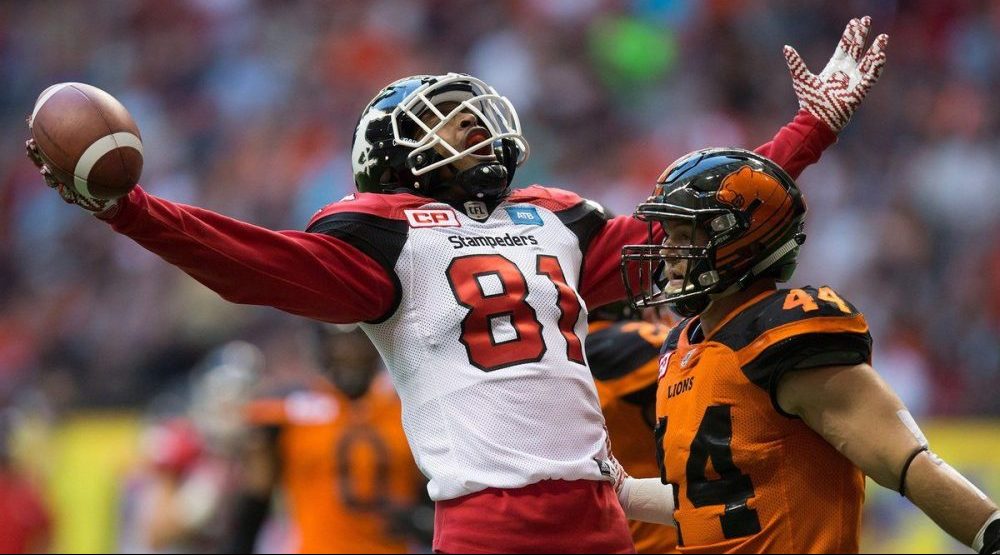 Well, that was ugly. In what was hyped the most anticipated game of the year for the BC Lions so far this season, Wally Buono’s crew seemed lost and invisible all night long, losing big to the Calgary Stampeders, 37-9 the final score.

Jonathon Jennings struggled to connect with his receivers all night long, ending his impressive streak of consecutive games passing for over 300 yards at four. Backup Travis Lulay played the majority of the fourth quarter, but let’s make things certain. There’s no quarterback controversy brewing in Vancouver. Jennings will be the starter going forward.

Every media outlet was ready, myself included, for the Lions to send a strong and clear statement to the rest of the league that they were the best team in the CFL. Safe to say we’re going to have to rethink that after Calgary absolutely bullied BC in every sense of the game. The Stampeders have been an absolute force for years now, and continue to be the royalty of the CFL.

1. Offence out of sync

For Jennings, it simply wasn’t his night. The 24-year-old completely only completed 10/22 passes for a mere 153 yards, and had to seemingly scramble every time he was out there on the field.

Calgary’s front-line on D really brought the heat to BC’s O-Line, and even when Jennings had time to create a solid throwing window, receivers were not in sync with the young gunslinger. Emmanuel Arceneaux in particular, dropped two key passes that could’ve possibly changed the look of the final score.

2. Wally sets it straight at the half

Once the second quarter clock hit zero’s, Wally Buono wasn’t happy with the team’s effort or performance at halftime, trailing 17-9.

Something that the Lions have really done a cool job of this year through social media is providing fans a glimpse of what goes on in the dressing room before, during, and after the game.

Here was the full all-access of his pre-second half speech in the Leos locker room.

Step into the Lions’ Den at the half.#CFLGamedayhttps://t.co/ltVDXG5aeU

Wally preached that this was the worst half they could possibly play. Unfortunately, the second half topped that. Chris Rainey fumbled the opening kickoff to start the second half and it all spiralled out of control from there, starting with the Stamps pouncing on the costly cough-up just two plays later.

For a Lions defence that has been absolutely stellar this year, the unit came out absolutely dormant from the get-go. Bo-Levi Mitchell threw at veteran DB Ryan Phillips for the majority of the Stamps first possession of the game, eventually resulting in a quick 8-0 lead. The Lions never really recovered after that.

Mitchell finished the night with an unreal stat-line, throwing for 340 yards and two touchdowns on 28/38 passing. Wait your turn, Jennings. This guy is the by far the best pivot in the CFL.

Defensive lineman Mic’hael Brooks will return from injury next week when the Lions travel to Ottawa to take on the Redblacks. This is great news considering the lack of a pass rush BC was able to manufacture against Calgary. Many CFL media members consider Brooks to be the best interior lineman in the game when healthy.

Unfortunately, with Brooks returning, another man on the defensive side of the ball is going to be sidelined for quite some time it looks like.

Clarke replaced DB TJ Lee after the starting halfback went down with a devastating season-ending achilles injury in Week 4 against the Riders. Initial reports seem just as shattering for Clarke.

Jason Arakgi set a new record for special teams tackles on the opening kickoff. The nine-year CFL veteran passed Wade Miller on Friday night, and if the fellow Canadian chooses to play a few more years in the future, he could really extend his record to epic proportions.

6. What this means for the West Division standings

With the win, Calgary now sits at 6-1-1 in the West, three points ahead of the 5-3 Lions for first place in the division. With how well first-year head coach Dave Dickenson’s club has performed through eight games, it’s going to be a tall mountain to climb for the Lions to climb back to first place.

BC gets their chance to scrape away at Calgary’s division lead next Thursday at Ottawa, taking on the 4-3-1 RedBlacks who have come off an embarrassing home loss of their own to Montreal.

Expect a different outcome from the Lions, who should be absolutely pissed off for a Week 10 ‘W’ after the egg they laid on Friday in front of their home fans.