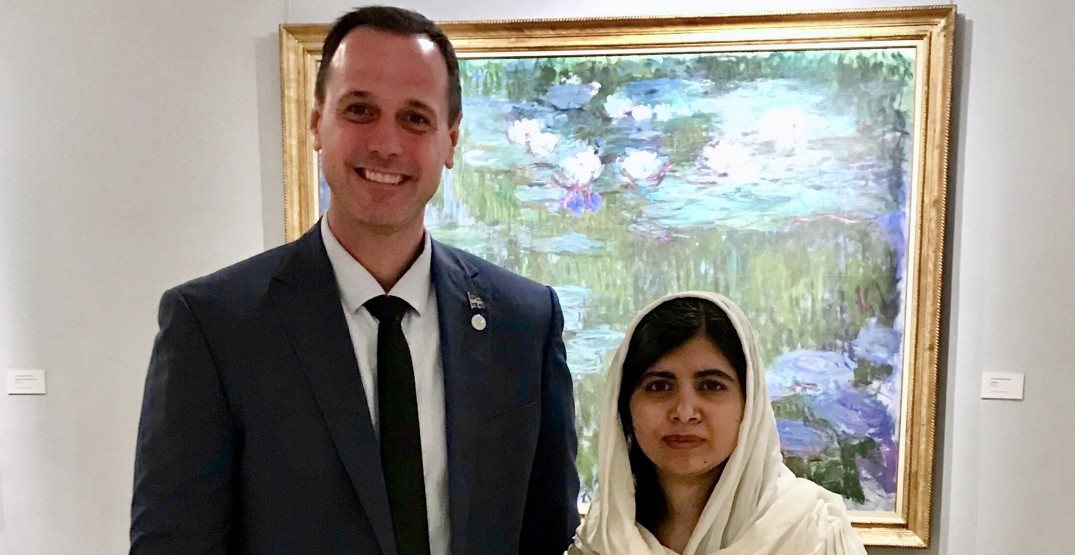 Quebec Education Minister Jean-Francois Roberge is facing criticism after he said activist Malala Yousafzai could teach in the province if she removes her headscarf.

Roberge met with the 21-year-old Nobel Peace Prize winner last week and posted a picture of their visit on Twitter.

Journalist Salim Nadim Valji replied to the tweet asking how Roberge would “respond if Mrs. Yousafzai wanted to become a teacher in Quebec?”

Mr. Roberge, how would you respond if Mme Yousafzai wanted to become a teacher in Quebec?

Valji’s question was referring to the Quebec government passing the religious symbol ban –known as Bill 21– in June.

Bill 21 bars workers in the public sector from wearing religious symbols — such as turbans or headscarves — in the workplace.

In his reply to Valji, Roberge said that it would be an honour if Yousafzai ever wanted to teach in Quebec but similar to “other open and tolerant countries” teachers in the province cannot wear religious symbols.

Roberge received a wave of criticism for his remarks about Yousafzai, who became a fierce advocate for girls’ education after being the target of Taliban assassins while travelling home from school on a bus in Pakistan in 2012.

What you said regarding Malala, is so humiliating to the whole world, and so very misleading. She definitely has millions of better places to go to educate people than coming to Quebec with open head to teach under #Bill21

Nothing says ‘tolerance’ more than policing what women wear.

This is neither open or tolerant. It’s hypocrisy.

Wow. How very intolerant of you. As well as embarrassing.

Yes, so tolerant that she can’t wear her head scarf. Good grief! Have you, by chance, been in contact with Trump lately? The stupid is contagious.

Quebec’s education minister, Jean-Francois Roberge, makes a fool of himsef by tweeting about his discussion on access to education with the (veiled) Nobel laureate Malala Yousefzai – while his government wants to ban veiled women from working as teachers.https://t.co/ldw9LyNFUl

This makes me so ashamed. It’s hard to know where to even start … https://t.co/ZJqFixwmcu

Our politicians do not have the social imagination or leadership skills this moment requires. The below is yet another illustrative example of the crisis of leadership in western democratic societies. #leadershipcrisis https://t.co/XvdFy8EwvR

“She can teach in Quebec if she accepts to remove a religious sign.” @SebBovetSRC presses François Legault on the Malala Yousafzai photo controversy. Read the background: https://t.co/h6yzhvOOHx #qcpoli pic.twitter.com/EdWINusF4h

“Malala did a lot of work to make sure that young girls can have access to different schools in different countries,” he said.

“Right now, the second subject is about who can teach those children. In Quebec, like France, like in Germany, like in Switzerland we decided that people being in an authority position, including teachers, to show a clear separation between State and religion…”

When Bovet asked if Malala would be allowed to teach in Quebec, Roberge said she would be able to “if she accepts to remove a religious sign.”

Roberge added that he thinks “people wearing a religious sign are good people.”

But at the same time, I think it’s important in Quebec because secularism is an important value in Quebec, and we’re not the only country.”