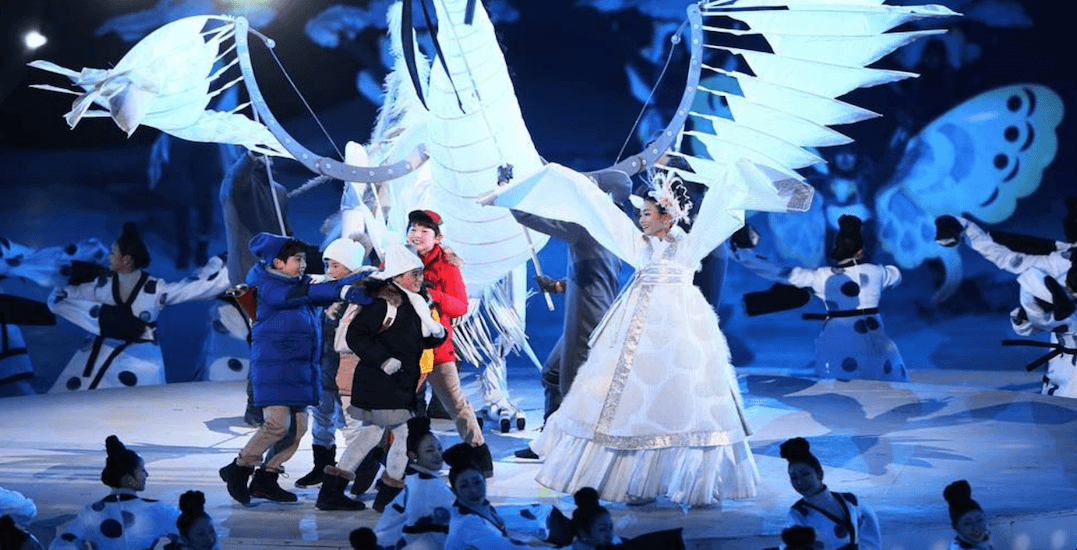 This was the moment Pyeongchang has been waiting for since the early 2000s. It lost the Winter Olympic bid in 2010 to Vancouver, and then 2014 to Sochi.

With the world captivated, and amid calls for peace, a capacity crowd of 35,000 spectators attended the opening ceremony of the 23rd Olympic Winter Games late Friday evening in the Gangwon province mountain town. 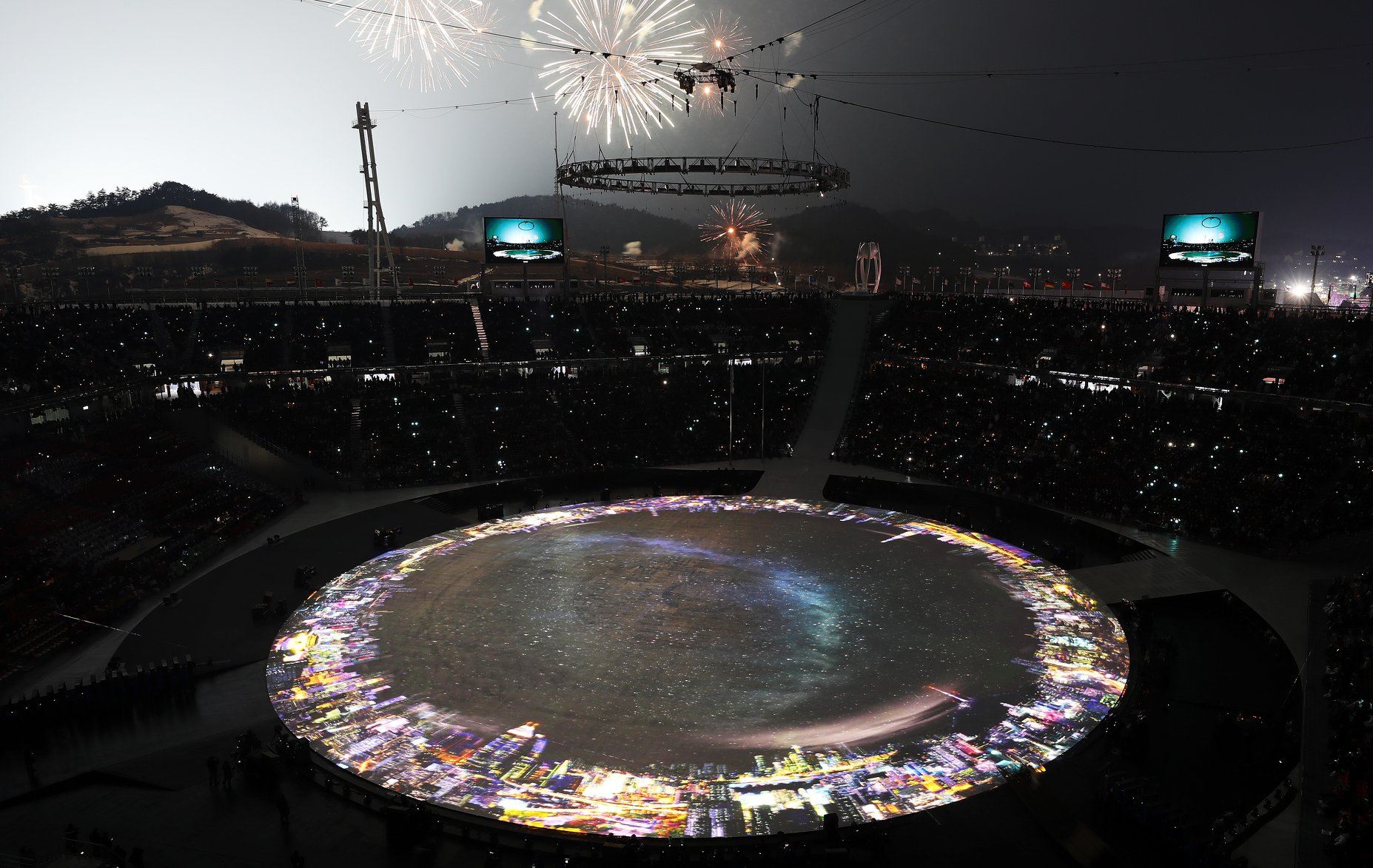 Running at a length of just two hours and 15 minutes, it was the shortest Winter Games Opening Ceremony, or any Olympic Opening Ceremony for that matter, since Nagano 1998.

The opening ceremony, from end to end, for each Winter Games typically lasts for three hours or more. 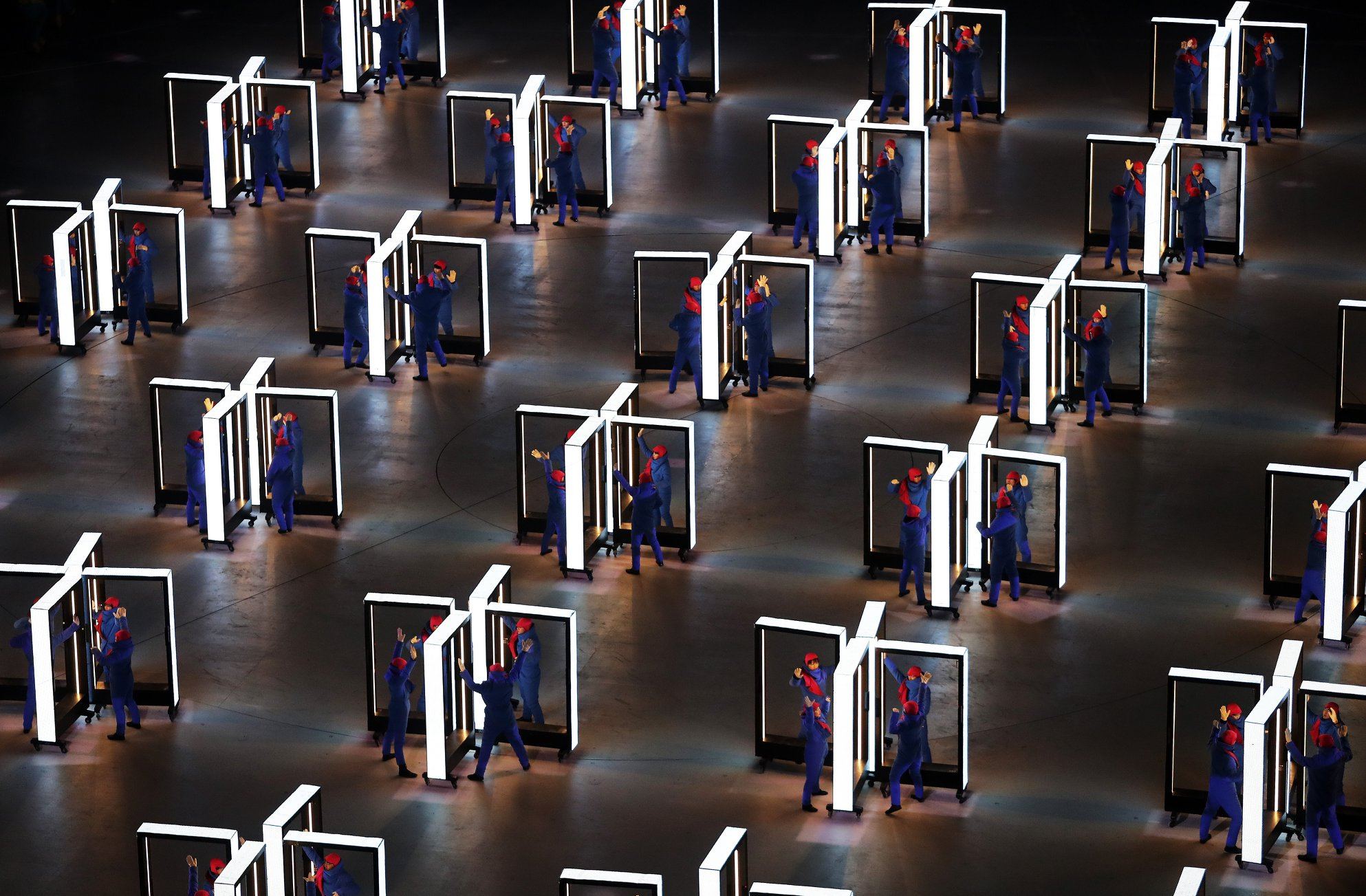 Scene from the Opening Ceremony of the Pyeongchang 2018 Olympic Winter Games. (PyeongChang 2018 / Facebook)

At Pyeongchang’s ceremony, the parade of nations was noticeably shorter than usual, possibly because of a combination of the temporary stadium’s unique pentagon shape – thereby reducing the athletes’ walking distance to their seats – and some athletes avoiding the show due to the cold weather.

Temperatures hovered at just -2ºC, not including windchill, at the first Winter Games opening ceremony held outdoors since Turin 2006. 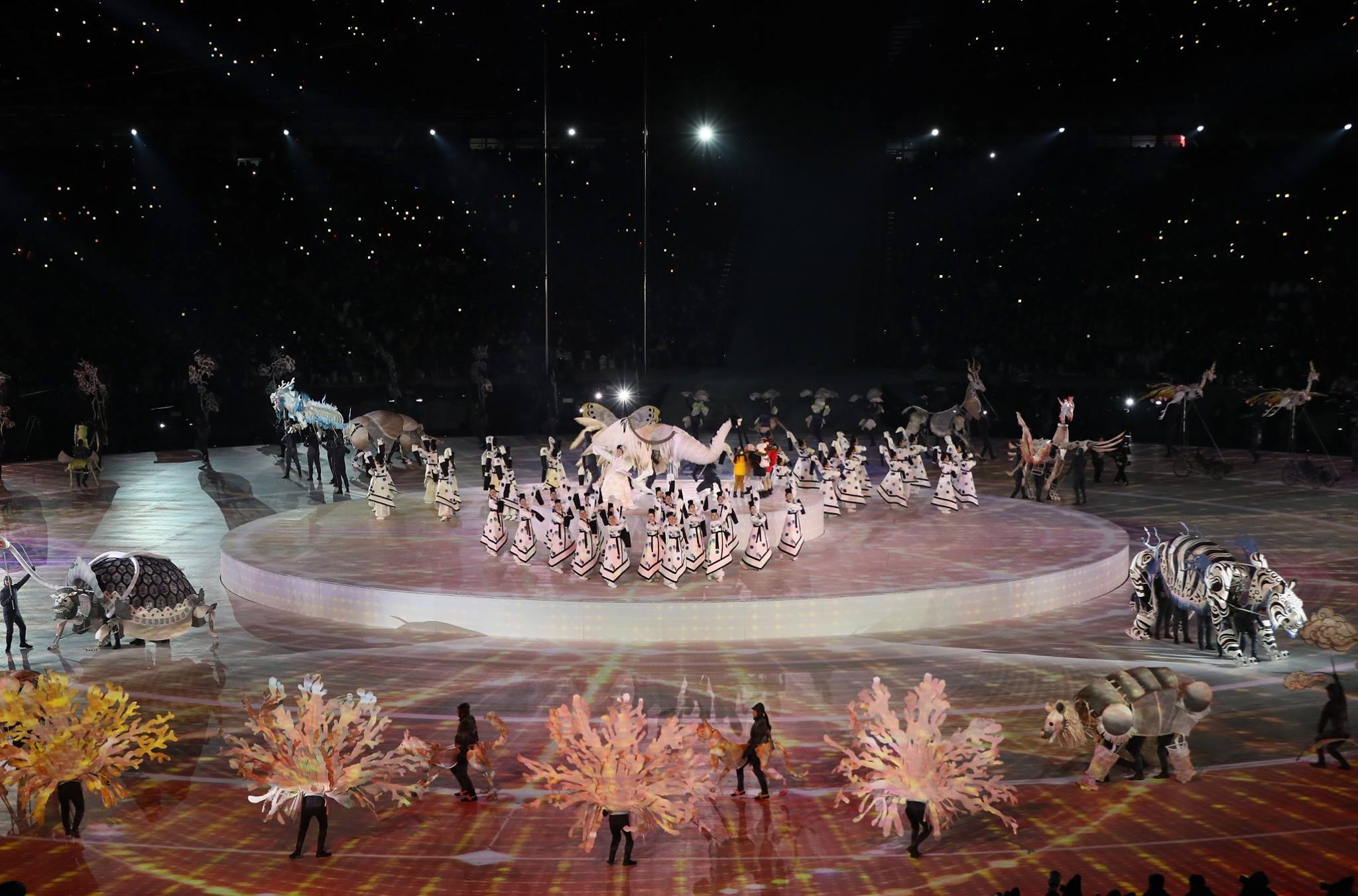 Scene from the Opening Ceremony of the Pyeongchang 2018 Olympic Winter Games. (PyeongChang 2018 / Facebook)

But quantity isn’t always quality, and organizers decided not to stretch out the ceremony.

The main artistic performance show after the parade of nations was only about 15 minutes long, whereas such segments in past ceremonies usually last 40 to 60 minutes. 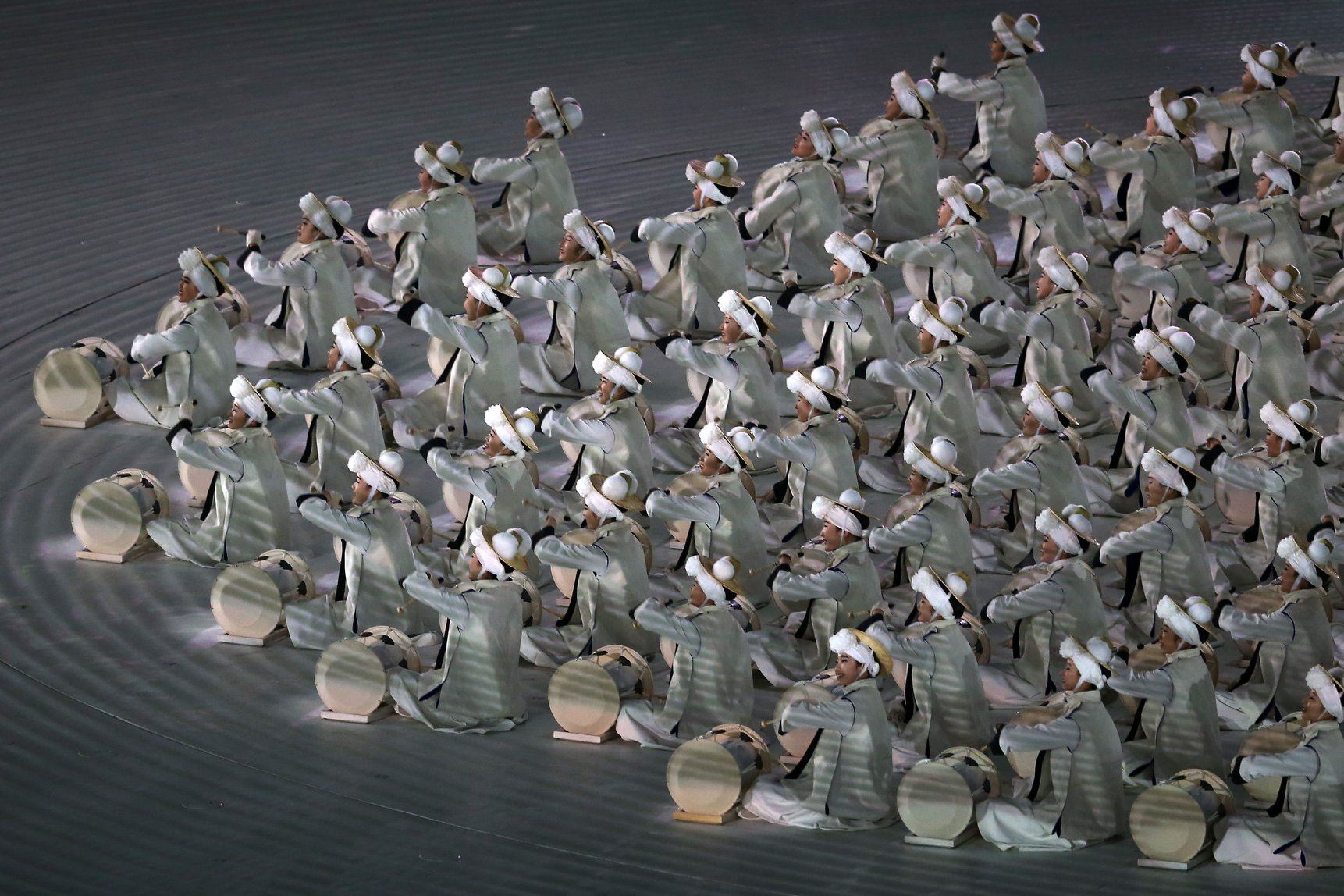 The show carried a theme of “Peace in Motion” and followed five imaginary children, each representing an Olympic ring, as they travel through time learning about the history, traditions, myths, and culture of South Korea. 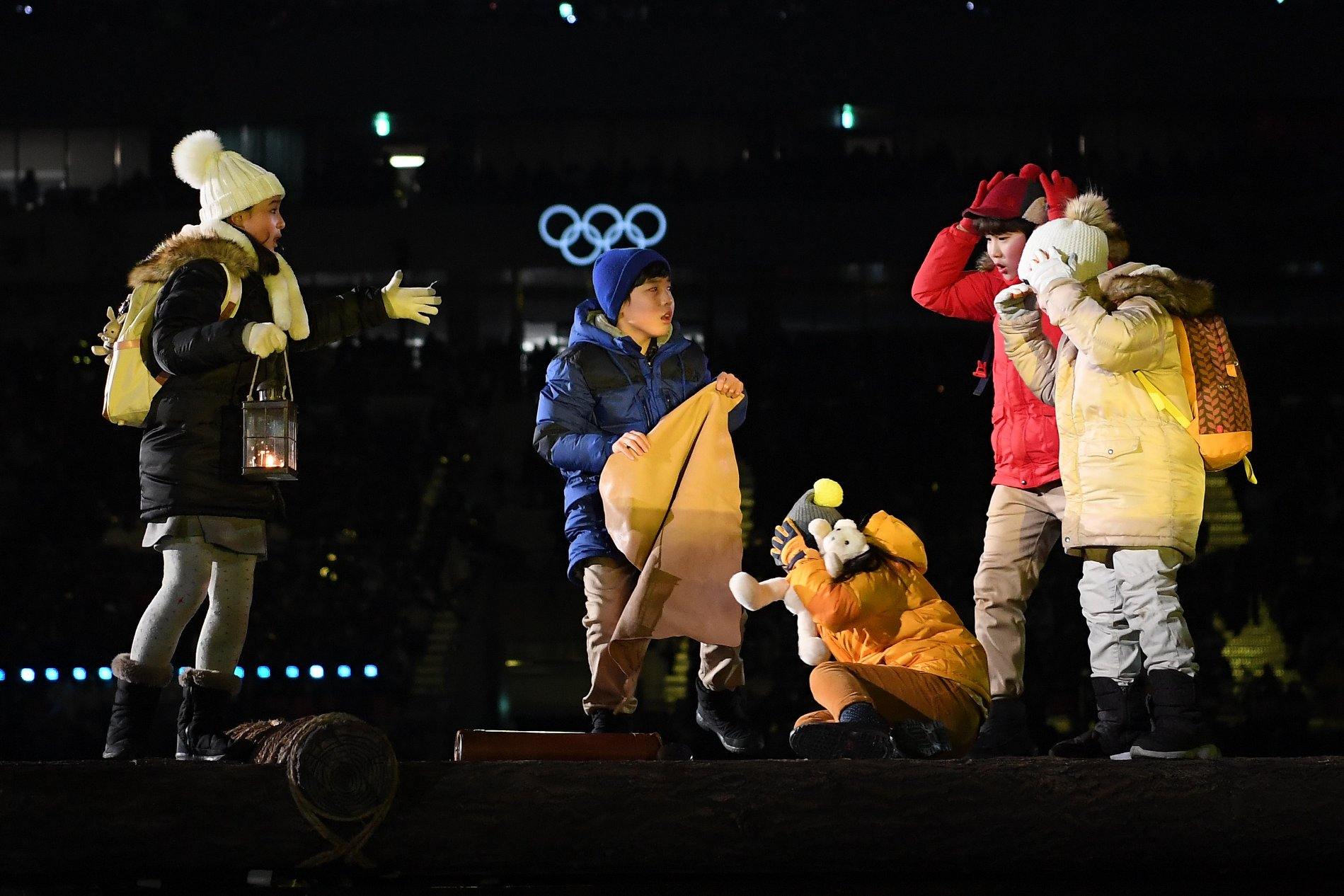 There was plenty of mass choreography, dance, fanfare, pageantry, digital projections, drones, and fireworks throughout the ceremony. Thousands of performers – mostly volunteers – were involved in the spectacle. 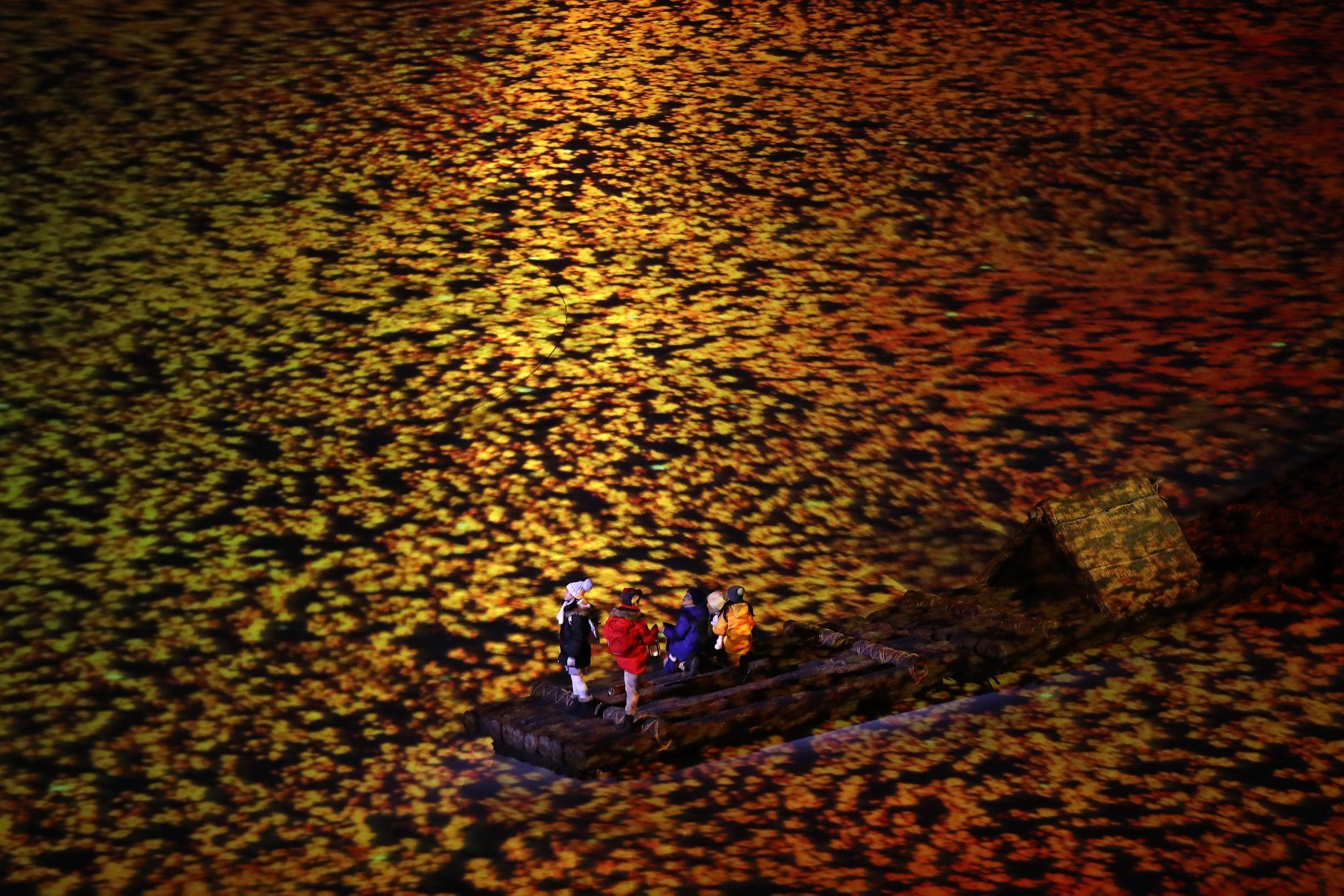 Here are some highlights:

The return of the shirtless Tonga man

Remember Pita Taufatofua? The Tongan taekwondo athlete stole the show during the Rio de Janeiro 2016 Opening Ceremony when he entered the stadium as the flag bearer shirtless and fully oiled.

And braving the frigid conditions, he reprised the key role – and in his own unique way – for his country at Pyeongchang.

Taufatofua qualified for cross country skiing last month, even though he never skied in his life until after Rio.

It had to be Yuna Kim.

Kim, who was wearing a classy white figure skating outfit, performed a short ice dance on the tiny rink built on the base of the cauldron before being handed the torch.

The cauldron received a ‘real’ lighting; unlike the electronic lightings of Turin and Sochi, the flame from the torch – held by Kim – directly reached the cauldron to create an authentic ignition.

Moir and Virtue lead the pack

It was a beautiful moment reminiscent of 2002 when Jamie Salé and David Pelletier entered the closing ceremony as flag bearers.

Moir and Virtue led a 225-member Canadian team, which is the country’s largest for a Winter Games.

No, Psy didn’t make an appearance to perform his hit wonder, but the famous K-pop song was played early during the parade of nations, with parade marshals and even some athletes dancing to the tune.

No, it was not an empty stadium

During the opening ceremony, tweets about an ’empty stadium’ were trending, but that was not quite the case.

Saddest #OpeningCeremony I’ve ever seen at the Olympics. Stadium practically empty. I know it’s cold and late in South Korea, but couldn’t the organisers have paid a few thousand people to turn up to give it some atmosphere? Vancouver 8 years ago was packed.

LED light fixtures on a pole, about head height when sitting, affixed between the spectator seats provided a digital visual backdrop for the ceremony (such as the display of flags during the parade of nations), but at times its brightness gave the appearance of an empty stadium.

The technology was first introduced for the Olympic ceremonies at London, and it certainly beats the Vancouver method of forcing spectators to wear provided ponchos to create a light-coloured canvas for digital projections aimed at the seats.

Drones form the Olympic rings over the stadium

Over 1,200 drones operated by Intel – just like the drones at Lady Gaga’s halftime show during the 2016 Super Bowl – flew high above the stadium to provide the Games with a unique visual experience.

The drone army formed the shape of a snowboarder before transitioning into the interlocking Olympic rings.

However, like the Super Bowl performance, the sequence was pre-recorded due to the logistical issues of flying in Pyeongchang’s harsh winter conditions.

1218 drones assemble into a snowboarder then morph into the Olympic rings. Amazing.#WinterOlympics#OpeningCeremony pic.twitter.com/6LUwVHxaBM

No doves were harmed in the making of this ceremony

The International Olympic Committee (IOC) requires the representation of doves, as a symbol of peace, be created during the opening ceremony.

Pyeongchang organizers opted to fulfill this requirement by having hundreds of volunteer performers hold lanterns and form a mass representation of a dove on the stadium floor. The choreography was performed to a cover performance of John Lennon’s “Imagine”.

For decades, live doves were released into the air, but that practice ended after Seoul 1988 when the birds – released earlier in the opening ceremony – were accidentally barbecued during the lighting of the cauldron.

Fun fact: The IOC requires hosts to represent the dove at each #OpeningCeremony as a symbol of peace. 🕊

Also a fun fact: They stopped using live doves after Seoul 1988 because of an unplanned BBQ. 🍗 #PyeongChang2018 #PyeongChang #Olympics pic.twitter.com/dBAQspJSSc

Say no to drugs, athletes. We’re looking at you, Russia.

That was the message IOC President Thomas Beach delivered during his speech: “You can only really enjoy your Olympic performance if you respect the rules, and stay clean. Only then will your life-long memories be the memories of a true and worthy Olympian.”

Russia is, of course, banned from competing in these Winter Games, and its flag was not marched during the opening ceremony. Only 169 Russian athletes have passed the screening test to compete as independents under the Olympic Flag.

As a symbol of hope and goodwill during recent geopolitical tensions, with fears that it could set off nuclear war, this was the first time two Koreas marched together into an Olympic Opening Ceremony since 2006.

Instead of their respective national flags, the delegation marched into the stadium carrying the Korean Unification Flag, which has the symbol of a blue Korean peninsula against a white background.

The Pyeongchang Games will close on Sunday, February 25. This is South Korea’s second role as an Olympic host, having held the Summer Games in Seoul in 1988.