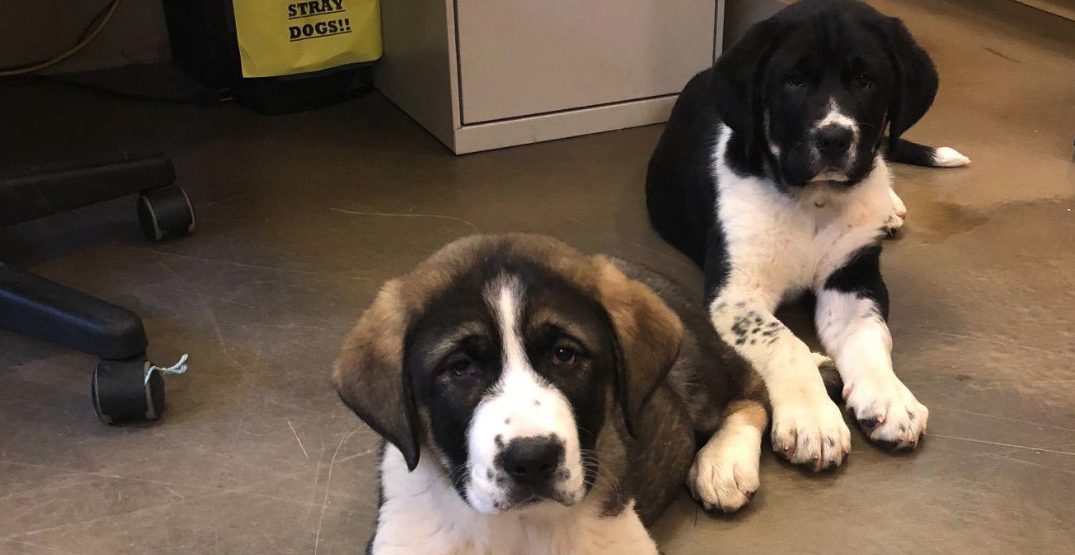 It was a wet and cold weekend for two St. Bernard-cross puppies that were stranded on a cliff in Mission, BC.

The 16-week-old female puppies were saved by Mission and Central Valley Search and Rescue volunteers on Sunday, after four days of being stuck on the cliff.

Rescue crews began their search after residents reported on social media that they were hearing echoes of the puppies crying and whimpering.

Adrian Walton of the Dewdney Animal Hospital inspected the puppies after they were rescued.

He said the search and rescue team did a good job of making sure the dogs were kept warm. Walton said both the animals were quite underweight after several days without food, but they were healthy overall.

“Fortunately puppies are used to mom going away for a few days to hunt,” he told Daily Hive.

Walton says there is a rural road above the cliff and it is quite possible that the puppies had a fall, leading them to get stuck.

After their check-up, the puppies were brought to the Maple Ridge SPCA and staff have named them Duchess and Francine.

Duchess and Francine would like to give a great big thank you to everyone for their support! These girls are healthy and enjoying lots of puppy food from @HillsPet! As these girls are on a stray hold they are not available for adoption at this time. #HillsFoodShelterLove pic.twitter.com/DB7SORk1f9

Krista Shaw of the SPCA said that the dogs are “doing great” and are “happy to be off the mountain.”

“They have settled in nicely,” said Shaw.

Duchess and Francine are currently on a stray hold and are not yet available for adoption.