Last week Clark Williams-Derry of Sightline Daily, did an analysis on the public transit usage in the Pacific Northwest’s three largest cities, Seattle, Vancouver and Portland. The results may come as a surprise to frequent TransLink bashers but Vancouver came out on top. Having been to all three cities, from personal experience Vancouver is far more easier to get around using public transit than Portland and Seattle and the statistics back it up.

His study isn’t perfect but some of the findings are worth sharing as he looks at the metro areas for Vancouver, Seattle and Portland.

The simplest comparison among the three cities looks at the average number of bus and rail transit boardings per person, per year, in the entire metro area. And on that measure, Vancouver vastly outstrips its two southern neighbors. 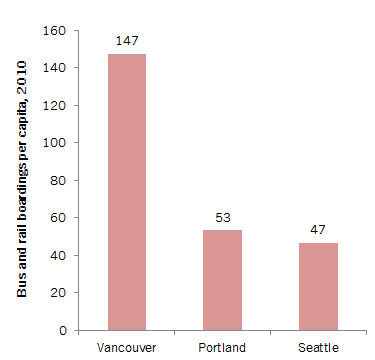 Unfortunately, the story is somewhat more complicated than this chart suggests. Vancouver’s transit system encourages transfers—and since there’s a single, unified transit agency for metro Vancouver, there’s good data on how many riders actually transfer in the course of a single trip. Seattle, in contrast, has so many overlapping transit systems that it’s very difficult to assess how many transfers there really are.

Still, even if you assume that each transit boarding in Portland and Seattle represents a single trip, but use Vancouver’s data on “trips” rather than “vehicle boardings,” Metro Vancouver stillbeats the two US cities handily: 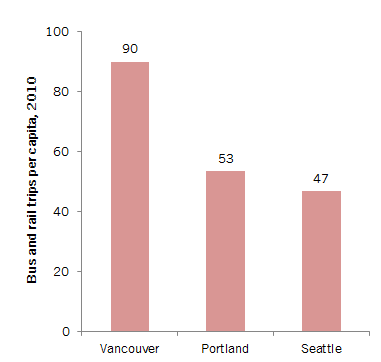 As the statistics above indicate, Vancouver easily bests Portland and Seattle when it comes to public transportation. Although the data does look at 2010 figures, a period in which for about a month Vancouver was home to the third most used transit system in North America (behind New York City and Mexico City), when annualized it would not make much of a difference and I would suspect Vancouver would still remain on top and quite easily.

When comparing the metro areas of the three cities, it’s clearly evident that Vancouver is built more compactly. It’s safe to say Metro Vancouver residents live in compact neighborhoods closer to transit, thus making transit a viable option. It also explains why Vancouver feels like the largest city out of the three Pacific Northwest cities. One of the reasons our transit system is widely used is that it reaches more people. This is only going to get better as the city finally shifts its focus to more transit oriented developments such as Marine Gateway and the Cambie Corridor plan. Both those plans are encouraging signs that more people will be living and working within walking distance of rapid transit.

Of course like any transit system Vancouver’s isn’t perfect. People will continue to cry about it not being 24 hours. People south of the Fraser will continue to complain that they are treated like 3rd class citizens and Burnaby’s mayor will continue to kick and scream about any further transit projects because his city is fully serviced already. With that being said we do have a great transportation system for a city our size and this comparison validates it. Future projects such as the long awaited Evergreen Line, UBC line and possible LRT south of the Fraser will only boost transit rider numbers.