If you are a Richmond resident, no doubt you have probably seen these three gigantic heads, which were recently installed along No. 3 road (close to Lansdowne Mall). These heads are the latest addition from the Vancouver Biennale in Richmond. The others include an addition at YVR and the giant controversial Lenin/Mao statue.

These latest pieces are by Mexican artist Javier Marin and are  named Cabeza Vainilla, Cabeza Cordoba and Cabeza Chiapas. If you are in Richmond I suggest you check them out.

The Vancouver Biennale website describes the art as follows: In these gigantic heads one can sense strength, decay, dignity and history. The red color of Mexican clay suggests remnants of some ancient monument to unknown heroes and struggles of a people to become an independent nation. 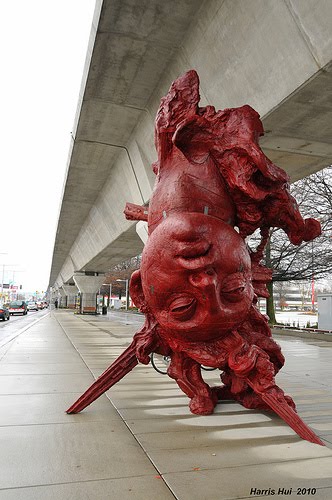 The recent surge of public art in Vancouver and the city/suburb of Richmond is welcomed. Furthermore, I would like to see future installations in East Vancouver, namely in Mount Pleasant, Commercial Drive and possibly in Little India/Sunset neighbourhood.

Moreover, these three heads would have looked awesome under the Georgia and Dunsmuir Viaducts or even on Granville Street. Instead on Granville we are treated to a giant piece of space junk, which oddly enough tourists and locals seem to be attracted too.