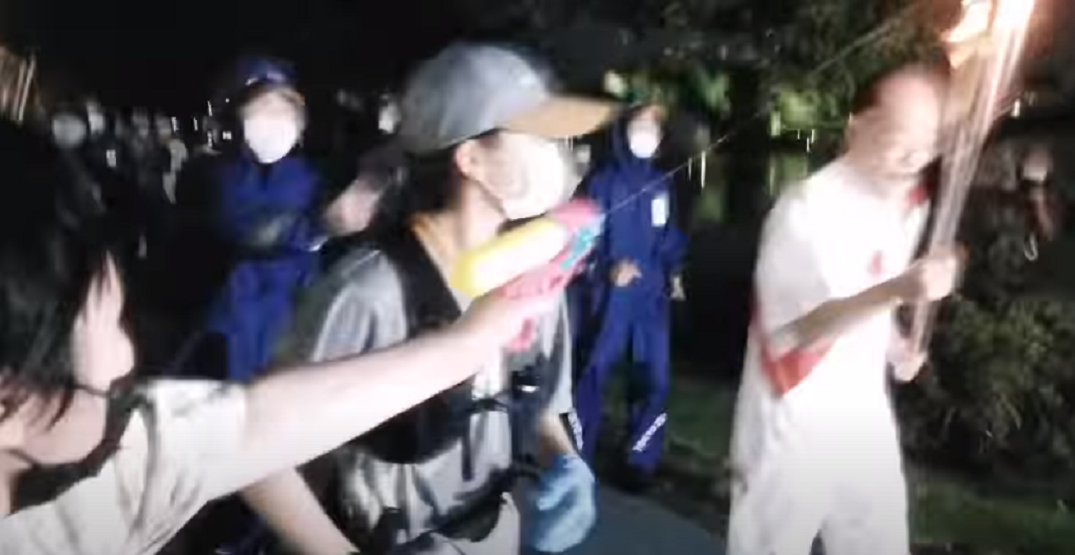 The Olympic torch relay is known for being one of the most universally recognized symbols of human perseverance, as it travels across the globe every other year as part of a journey to that year’s Games host city.

But one woman in Japan’s Ibaraki prefecture had other ideas about this year’s relay, unsuccessfully attempting to douse the flames with a squirt gun while shouting in protest.

You can see the incident yourself in the video below.

“The woman who shot while being arrested by the police officers on the scene was taken to the police car while continuing to shout ‘Please stop the Olympic Games!’ and ‘Respect human life!'” the video’s description (translated via Google from Japanese) reads.

Her attempts were rather futile for two key reasons.

Firstly, the squirt power of her gun appeared to be rather light, barely making an impact on the flame. Secondly, the Olympic Torch contains an internal fuel cylinder inside of its aluminum base that keeps the fire burning through any weather concerns.

Publication Inside the Games reported that the Olympic torch relay will be taken off public roads in order to help curb the spread of COVID-19 (and perhaps future protests).

It’s unclear exactly what the woman was protesting in particular, but this year’s Olympics have faced no shortage of issues.

Coronavirus cases are at a seven-day average of 1,591 across Japan, with a scrambled vaccine rollout that has seen 18.3 million (14.5% of the population) currently fully vaccinated. By comparison, Canada has seen 13.8 million people (36.6% of the population) fully vaccinated, despite having a population more than four times smaller. Three athletes have already tested positive for the virus after arriving in Japan.

The Games, partially impacted by the year’s delay, have also gone at least $2.8 billion over budget of the original $12.6 billion target.

The Olympics are set to begin with the Opening Ceremonies on July 23.