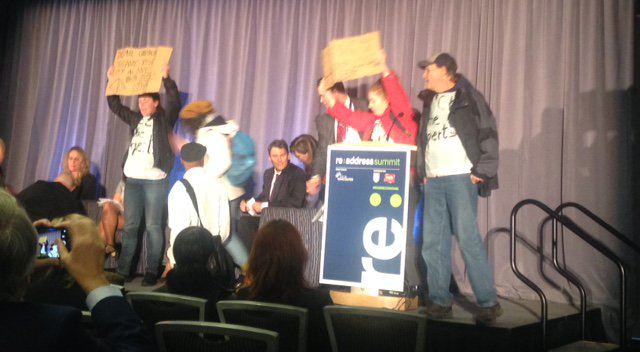 Mayor Gregor Robertson was evacuated from an international summit on housing affordability in Vancouver on Thursday after protestors stormed the stage.

The summit is part of re:address: Global Discussions on Housing Affordability, a week of City events running from Monday, October 24 to Saturday, October 29.

It is Vancouver’s first international housing conference, aimed at fostering innovation and collaboration between the world’s housing leaders to address affordability.

The week’s events were also supposed to be a chance for young people to make their voices heard and tell the City what they think about the housing crisis in Vancouver.

But a group of protestors from Alliance Against Displacement took matters into their own hands Thursday morning, as Robertson was taking part in a panel on housing affordability.

Tax the rich to house the poor, make the rich pay! Video from disruption. #readdresshousing pic.twitter.com/d1GhCPklvR

In a statement posted on Twitter, the grassroots group said they disrupted the summit because they had nothing to discuss with Robertson and the experts on the panel.

“We tie our housing policy to the fates of homeless people of the tent city just blocks from this hypocrite’s housing summit, whose community is being smashed and swept under mats on the concrete floors of temporary shelters hidden from public view,” said the statement.

The group is referring to a homeless camp at 58 West Hastings Street, which housed about 100 people until Tuesday, when it was forcibly broken up by the City.

The City evicted all residents, saying conditions at the camp pose a danger to everyone there, and made shelter places available to all who wanted them.

“We demand every level of government make ending homelessness and evictions the highest priority of your housing policies,” the statement reads.

“Raise taxes on the rich and corporations to whatever level necessary in order to build 77,000 units of social housing every year across Canada.

Statement distributed (thrown into the audience) about why we disrupted today’s #readdresshousing summit pic.twitter.com/EDBNVzq0gr

The panel reportedly resumed after 20 minutes, with Robertson agreeing with the protester’s call to tax the rich and house the poor.

“Shame” cry protestors at #readdresshousing summit – call for “action not words” as they take over @MayorGregor panel stage #vanre pic.twitter.com/8EaZvTGk0c