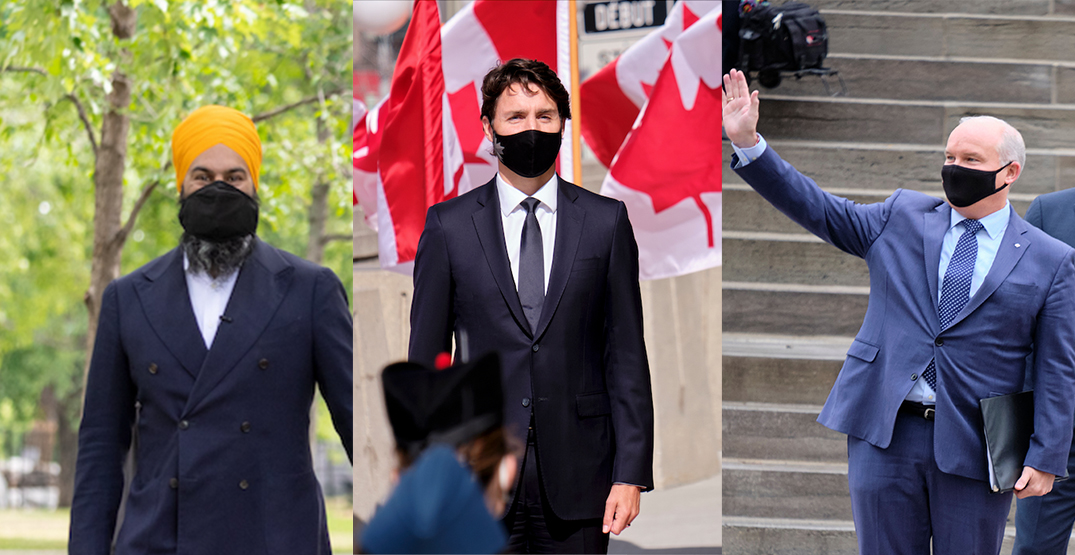 A running list of specific promises announced by the Liberals, Conservatives, NDP and Green party since the official start of the federal election campaign on Aug. 15.

Aug. 29: Have a net-zero electricity grid by 2035. End thermal coal exports by 2030. Set five-year targets starting in 2025 for the oil and gas sector to achieve net zero by 2050. Establish a
$2-billion Futures Fund for Alberta, Saskatchewan and Newfoundland and Labrador. Provide $5,000 toward zero-emission vehicle purchases. Build 50,000 more charging stations. Require that at least half of all passenger vehicles sold in Canada are zero emission by 2030, and all are zero emission by 2035. Provide retrofit grants of up to $5,000 and interest-free loans of up to $40,000.

Aug. 28: End plastic pollution by 2030. Require all plastic packaging to be 50 per cent recycled plastic by 2030. Establish a $100-million fund to help companies scale up and commercialize solutions to reusing and recycling plastics. Implement a “right to repair” for home appliances.

Aug. 24: Build, preserve or repair 1.4 million homes over four years. Make $4 billion available to cities through a Housing Accelerator Fund. Introduce a Multi-generational Home Renovation tax credit. Introduce a Home Buyers’ Bill of Rights that would ban blind bidding. Commit $1 billion in loans and grants to develop and scale up rent-to-own projects so renters can own their homes in five years
or less. Introduce a tax-free First Home Savings Account to let Canadians under 40 save up to $40,000 for their first home, and withdraw it tax free for their purchase with no requirement to repay. Double the First-Time Home Buyers Tax Credit from $5,000 to $10,000. Reduce the cost of mortgage insurance. Ban new foreign ownership of Canadian houses for the next two years.

Aug. 17: Reduce fees for child care by 50 per cent on average in the next year and deliver $10-a-day on average child care within five years everywhere outside of Quebec.

Aug. 16: Extend the Canada recovery hiring program to March 31, 2022. Provide the tourism industry with temporary wage and rent support of up to 75 per cent. Launch an arts and culture recovery program that will match ticket sales for performing arts, live theatres and other cultural venues to compensate for reduced capacity. Extend COVID-related insurance coverage for media production stoppages. Implement a transitional support program for workers from the creative industry.

Aug. 30: Ban puppy mills. Ban cosmetic testing on animals. Add animal cruelty as an aggravating factor in domestic violence prosecutions. Provide $10 million a year to train judges and prosecutors on the links between violence against animals and violence against people.

Aug 20: Pay a 25-per-cent subsidy for all net new hires for six months, with up to an additional 25 per cent top-up depending on if the worker had been unemployed for several months.

Aug. 19: Build one million homes over three years. Ban foreign investors who live outside the country from buying property for at least two years, while encouraging foreign investment in affordable purpose-built rental housing. Release at least 15 per cent of the government’s real estate portfolio for homes. Require municipalities receiving federal funding for public transit to increase density near that transit. Allow the deferral of capital gains tax when selling a rental property.

Recover one million jobs lost during the pandemic. Pay up to 50 per cent of the salary of new hires for six months after the Canada Emergency Wage Subsidy ends. Provide a five per cent investment tax credit for any capital investment made in 2022 and 2023. Provide a 25 per cent tax credit on amounts of up to $100,000 that Canadians personally invest in a small business over the next two years. Provide loans of up to $200,000 for small and medium businesses in the hospitality, retail and tourism sectors, with up to 25 per cent forgiven.

Scrap all Liberal government childcare funding deals with the provinces and territories and provide a refundable tax credit covering up to 75 per cent of the cost of child care for lower-income families.

Double the Canada Workers Benefit up to a maximum of $2,800 for individuals or $5,000 for families and pay it as a quarterly direct deposit. Launch a “Super EI” that temporarily provides more generous benefits when a province goes into recession. Increase EI sickness benefits to 52 weeks for those suffering from a serious illness.

Meet with the premiers within the first 100 days of forming government to propose a new health agreement that boosts the annual growth rate of the Canada Health Transfer to at least 6 per cent.

Aug. 31: Increase the taxable amount of capital gains profits for house flippers from 50 to 75 per cent.

Aug. 21: Tighten the rules to prevent developers from “renovicting” families. Provide help of up to $5,000 a year for families’ rents while tackling wait lists for affordable housing.

Aug. 18: A 20 per cent foreign homebuyers’ tax along with the construction of 500,000 affordable housing units in the next decade. The tax would apply to the purchase of homes for those who are not Canadian citizens or permanent residents.