Project Almanac, a time travel thriller brought to us by producer Michael Bay, opens January 30. Shot as ‘found footage’ it will follow brilliant teenager David Raskin, portrayed by Jonny Weston (Chasing Mavericks), and his friends as they build, use, and abuse a time machine.

“It’s really important to me that the movie is deep in that way… I think the movie could have been successful as just like a teeny kind of adventure story, but I think with the time machine comes a lot of profound questions about deep, heavy, things,” said Weston, asserting that the film will have an intellectual side.

Comparing his character to some of the other sci-fi heroes the market has been flooded with recently Weston says that “He’s not any form of superhero whatsoever. He’s just kind of this brilliant young kid who’s trying to live up to his father’s genius of like his MIT and technology and he finds out his dad was working on the time machine and he basically sets out to build it and it functions to a certain degree but he gets a little selfish with it, as anybody would I believe.”

The time machine is not just a tool to David, but a remnant of his father. Weston comments that “I think it represents everything to him, and I think he maybe to a certain degree believes that his father maybe left the machine there for him and then we begin to question whether or not his father has even passed away or if he’s just in another time.”

Weston says he would describe Project Almanac as a coming of age story, “Coming of age and coming to deep understandings of who you are and what it means to have power and control.”

Understanding is often achieved through mistakes, though, and Weston describes his character’s mistakes as being only human, “Any teenage kid with the opportunity to perfect the situation standing in front of a girl he loves, he will probably do it.”

The genre of time travel almost always includes the possibility of the world becoming horribly warped, often through benign or even heroic acts. Weston described these risks:

“What happens if you time travel back and you stop someone from getting on an airplane, perhaps you stop a catastrophe from happening, but from that catastrophe not happening someone survives and becomes a terrible person and causes several other catastrophes.

You want to go back and you want to kind of perfect things and police the world, but inevitably nobody should have that type of power because of the ripple effects and what ends up happening to people … I don’t think that responsibility should ever lie in anyone’s hands, having a time machine. And I say that while knowing that if I had the time machine I would use it.”

Another genre Project Almanac taps into is ‘found footage’, which can potentially have a huge impact on how we view the story. Weston describes the effect: “It’s a very personal medium. Even when I’m watching it. People are going to feel like they’re in the car with us, or in the basement with us building the machine, or at Lolapalooza, the music festival, with us. It’s very personal and involving.” 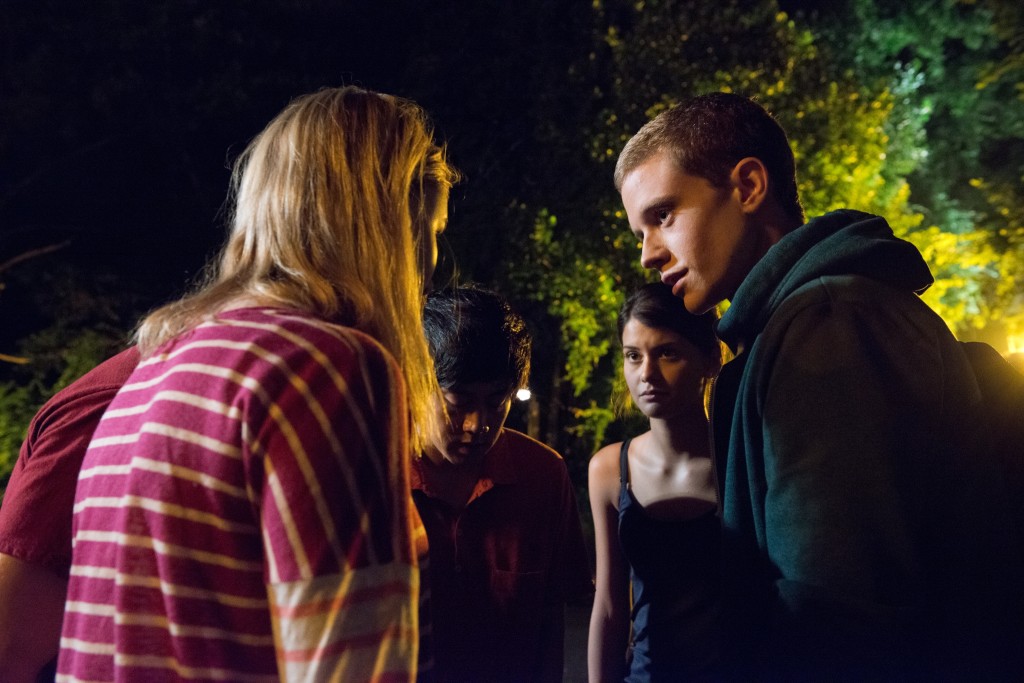 From watching the trailer it is clear that, in addition to being about the character David, the film will centre on his friends. Weston has some very high praise for his ensemble, especially Sofia Black-D’Elia (Gossip Girl, Betrayal) who plays David’s love interest:

“I love them. They’re incredible. Sam Lerner who was my friend before we even knew about this movie plays Quinn and Allen Evangelista they’re all incredible people and especially Sofia Black-D’Elia who plays Jessie we had a long long process auditioning for this movie. I read with a lot of girls and she read with a lot of guys and it was so clear that the two of us had chemistry.

And there’s a lot of pretty girls … but Sofia’s just like so engaging as well as beautiful and a very very complex person and so that romance story is really strong in there. We had as much fun as it looks like we did filming this.”

Weston wants Project Almanac to be a fun movie, but he also hopes that it makes us think. When audiences leave the theaters he says “I hope that they’re having a fun ride, but I also hope that people ask themselves questions. If they had a second chance would they take it? What is actually the most important thing in your life and are you willing to be honest and straight forward about it the first time?”