Much ink has been spilled on the topic of Vancouver’s growing bike theft epidemic. Whether on traditional or social media, a week doesn’t go by that we aren’t provided with another stark reminder of the reality of riding a bicycle in our city, often in the form of another colleague’s wheels being stolen in the cold light of day.

Bike theft remains a significant deterrent for many people we know who are considering purchasing a bike of their own, and using it as a means of transportation. Most are (understandably) unwilling to invest in a machine that has a high probability of being stolen, and a little-to-no chance of being recovered.

This negative perception (and very real barrier) has led to the City of Vancouver finally looking at ways to change the narrative. Enabling cycling has always been a key aspect of Vancouver’s Greenest City 2020 action plan, not just for increased active travel – which promotes healthy lifestyles – but also as a means of social equity.

“Every segment of the population can ride a bicycle.” 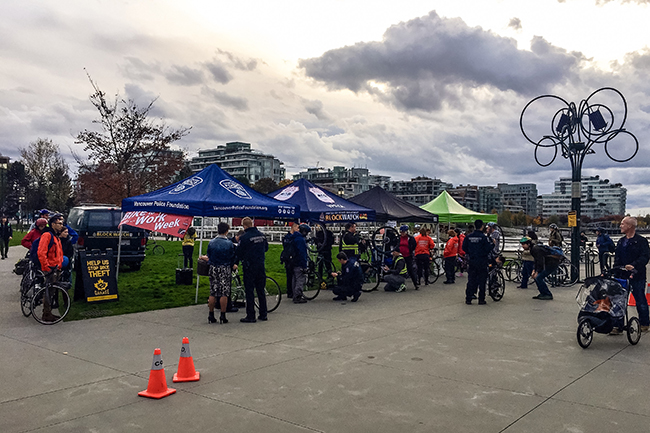 “Every segment of the population can ride a bicycle if they want to,” says Vancouver’s Director of Sustainability, Doug Smith. He recognizes the goal is not only to get more people on bikes, but also keep them riding for a variety of daily trips, and theft remains a significant constraint. While city officials have made some efforts to tackle the issue, including installing more bike racks in places visible to the public, they fall short of the pro-active measures needed to truly make a difference.

So when Constable Rob Brunt of the Vancouver Police Department presented one of those ideas to Smith, the city and police force were excited to partner on a program focused on addressing the issue of recovering bikes after they’ve been stolen.

Constable Brunt and his partner, Constable Astrid Bonter, are well aware of the Vancouver Police Department’s reputation when it comes to dealing with bike theft. Of the 2,400 bikes reported stolen each year, less than four percent are recovered by their owners. The VPD does reclaim a significant number of stolen bikes, but with many lacking a police report or serial number, most go to auction. This situation is far from ideal, and was the catalyst to find a better solution – namely Project 529. 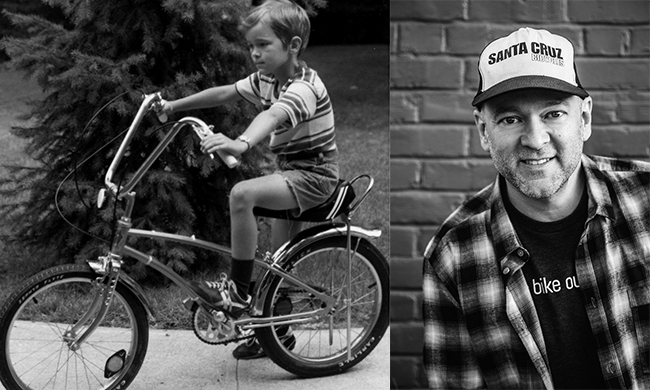 Created by former Microsoft executive and Xbox developer J Allard, the Portland-based Project 529 arose after his own bout with bike theft. A racer himself, Allard spent hundreds of hours searching for his own custom-built machine after it went missing in 2012. Like many, it eventually popped up on a resale site. But when he contacted the police in his then home of Seattle, he was asked whether he had a serial number to accompany the dozens of photos he provided. He did not. After much back and forth, and some resiliency on his part, Allard ultimately recovered the bike. But he was incredibly determined, whereas most others would have long given up.

“For a bike, locking it is simply buying time for the perfect getaway vehicle,” admits Allard. “Unlike a car, there are no keys to take with you when you leave it.”

Allard quickly realized the most powerful tool in recovering his treasured ride was social media. Within an hour of posting a picture of his bicycle online, over 9,700 people had either seen or shared his photo. This inspired the development of a smartphone app.

529 Garage is an online database powered by its users. Within it, owners can create a profile for their bike, including photographs of key details, the serial number, and most importantly, images of them with their pride and joy.

“A picture speaks 1,000 words,” says Allard. For him, posting an image of you smiling and enjoying a ride creates an emotional connection. It’s no longer about a piece of stolen property, but rather a person no longer able to revel in that ride.

The beauty of Project 529 is not simply that it houses information about your bike to share after the fact. When a user taps “Start Alert” on the app, a push notification is sent to all users in the area to be on the look out, and the bike is added to a “hot sheet”.

But what does one do if – like Allard – your bike doesn’t have a serial number? That’s where the 529 Shield comes into play. And Constables Brunt and Bonter have been working diligently to distribute them throughout the City of Vancouver. Each shield has a unique 7-character identifier that – once applied to the frame – is then permanently attached to that bike, much like a complementary serial number.

“This is not a bike registry. It’s a bike revolution.” 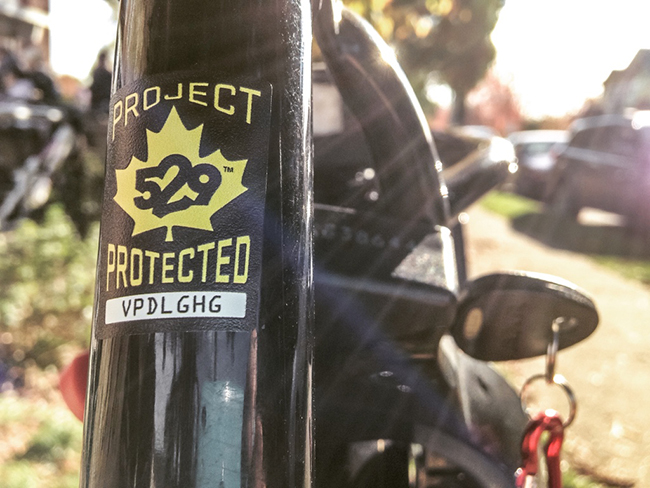 In partnering with Project 529, the VPD were given 10,000 shields for distribution. The first of these efforts occurred during HUB’s Fall Bike to Work Week, and the soft launch of the program. Brunt and Bonter anticipated some interest, but were promptly overwhelmed by the sheer volume of people that went out of their way to stop by their dedicated registration stations. Suggests Brunt: “This is not a bike registry. It’s a bike revolution,” for people refusing to be victims any more.

It certainly does ring of revolution. The Constables set a goal to have 10,000 bikes registered over the next three years. After just a month, they already have nearly 1,500 registered, a number that doesn’t include the 800 that have self-registered.

Currently, there are three ways to obtain a shield and register your bike on the 529 Garage app. Free shields are available at three of the city’s Community Policing Centres; Granville Downtown South, West End Coal Habour, and Grandview Woodlands, with hopes to include all centres by the end of 2016. There, Community Policing Officers can help you apply your shield and enter the details into the app.

Alternatively, you can visit one of the 529 registration stations selling the shields for $12.99 (or $29.99 for four). Then it’s as simple as installing the app, and adding your bike to the registry. For riders located outside the Vancouver area, Project has also made the registration kits available on Amazon.

Shields obtained from the VPD or through the CPC offices are automatically added to a database currently maintained by three dedicated officers. Assuming the program proves valuable, the various players hope to secure enough funding to expand, not just within Vancouver, but to other municipalities across the region, all of whom have expressed great interest in bringing 529 Garage to their jurisdictions.

There has even been interest as far off as Calgary. As it stands, Vancouver is the guinea pig to work out any technological hiccups, before expanding any further.

“We want to restore faith in the VPD.” 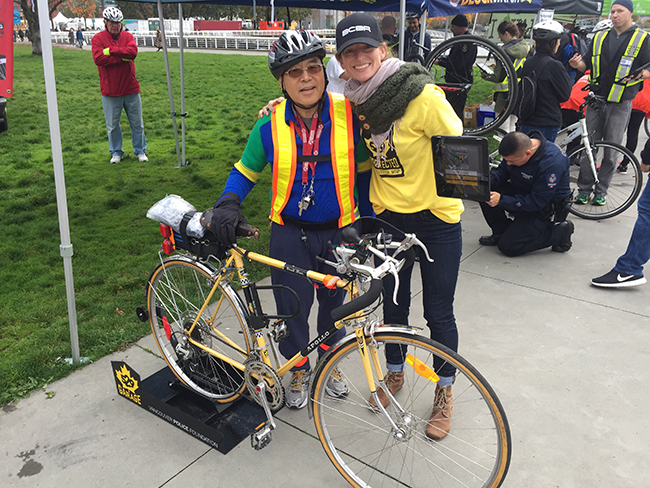 “We want to restore faith in the VPD, and empower the community,” says Bonter, who sees Project 529 as a “no strings attached” way to engage and build community.

“The 529 Garage Alerts are an ‘in hand’ police report you can share with all of your friends. After all, what is better? Three police officers looking out for your bicycle, or three police officers plus another 2,000 people?” Brunt asks rhetorically.

Brunt and Bonter admit the program isn’t a measure in theft prevention, but hope it acts as a deterrent. With such early popularity, they both hope that in the near future, they can walk down the street and spot 529 shields on almost every bike.

It is still too early to be able to report how successful the project is, but as Allard points out, “100% recovery depends on 100% compliance.” It’s not just about shielding your bike, but also about reporting it to the police. Those that self-register will not be in the database, and so they must be sure share it in the case of theft.

Future registration stations will be set up for the Spring Bike To Work Week in late May, where Bonter and Brunt will have more volunteers on hand from local partners to assist what they anticipate will be an even larger crowd than last month.

For our part, we are pleased to see the city and the VPD moving forward with inventive ways of discouraging bike theft and empowering bike owners. As Allard says, “Project 529 is a modern tool to make the community a part of the solution to a $500-million epidemic.”

To get more info about the Community Policing Centres offering shields, click here. A list of shops selling the shields can be found here.