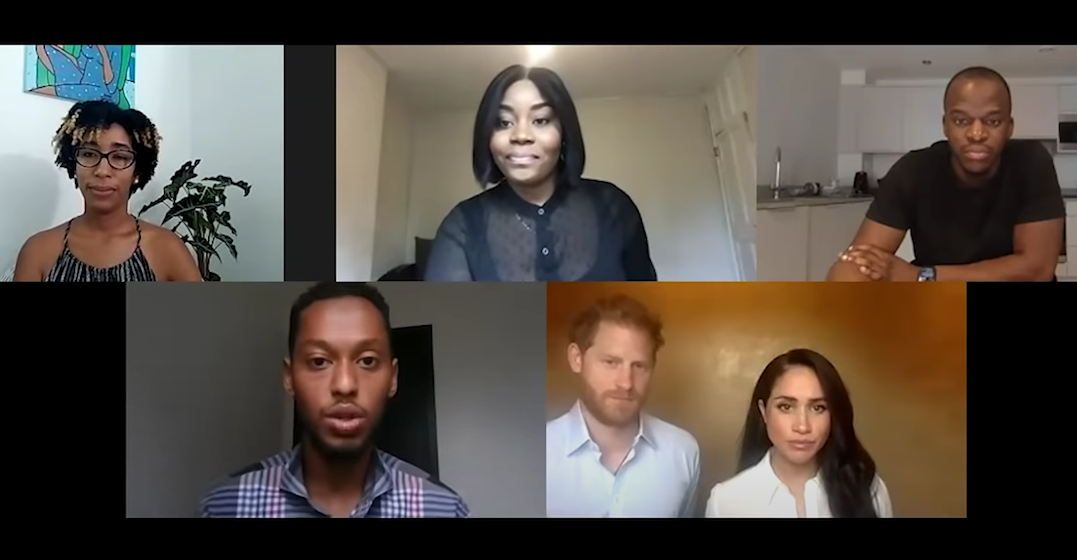 Prince Harry and Meghan Markle called for an acknowledgement of the Commonwealth’s past while meeting with young leaders from The Queen’s Commonwealth Trust.

The video conference, shared on YouTube, focused on how individuals can come together to make a difference in issues facing the world today, and how young people play a role in driving systemic change.

Hosted by Chrisann Jarrett, QCT trustee and co-founder and co-CEO of We Belong, alongside the Duke and Duchess, the discussion included: Alicia Wallace, director of Equality Bahamas; Mike Omoniyi, founder and CEO of The Common Sense Network; and Abdullahi Alim who leads the World Economic Forum’s Global Shapers network of emerging young leaders in Africa and the Middle East.

“You are the next generation of leadership which this world so desperately needs as it goes through this healing process,” Harry said.

In conversation, the group discussed that this moment in time is a critical one for advancing human rights and justice, and pushing forward for long-term, practical solutions for the future.

They also emphasized the importance of challenging unconscious bias and acknowledging the mistakes of the past.

“We can’t deny or ignore the fact that all of us have been educated to see the world differently. However, once you start to realize that there is that bias there, then you need to acknowledge it, you need to do the work to become more aware… so that you can help stand up for something that is so wrong and should not be acceptable in our society today,” Prince Harry said.

Markle commented that unconscious bias can manifest differently, and in complex ways, for various individuals.

“It’s not just in the big moments, it’s in the quiet moments where racism and unconscious bias lies [sic] and thrives. It makes it confusing for a lot of people to understand the role that they play in that, both passively and actively,” she said.

Markle also emphasized how individuals are looking for direction on specific actions that can be taken right now to help facilitate change in the realms of justice, fairness, equal rights, and the discussion explored those options.

Compassion, allyship, diagnosing and challenging systemic issues, and creating opportunities for the right conversations to happen are just some of the pieces of advice the young leaders on the call centred their recommendations around.

“Right now is such a powerful moment because we can combine the things that we know already and the things that we’re learning with the raw emotion that we’re feeling right now… It’s natural to feel grief and rage, but we actually need to change that and turn it into an energy that can be used for real, sustainable action,” Wallace said, before adding, “we each need to ask [ourselves] what is it that I’m willing to do right now, and how can I contribute to the change that we can no longer pretend is not necessary.”

Both Jarret and Omoniyi spoke to the social media aspect of the current movement.

“We all need to be in this for the long run. This is not a hashtag… It’s about being persistent with the demand that change must come and we’re not going to stop until it comes,” Jarret said.

Omoniyi echoed the sentiment with: “after pressing send online, people need to roll up their sleeves and do the work.”

Alim continued that same theme of learning, and urged today’s leaders to look to those who have tried to address systemic issues before, to value lived experience and to remember that “in any situation, it is always best to allow implicated groups to determine what the best course of action is.”

Markle reflected the idea, commenting that it’s important individuals know “know when to lead and know when to listen.”

While the leaders explored suggestions about how to effectively strive forward, the Duke and Duchess also highlighted the history of injustice, and emphasized the importance of it being acknowledged in the Commonwealth.

“When you look across the Commonwealth, there is no way that we can move forward unless we acknowledge the past… and guess what, everybody benefits,” Harry said.

Markle noted that while this task may not be comfortable, it’s an important step towards equality.

“We’re going to have to be a little uncomfortable right now, because it’s only in pushing through that discomfort that we get to the other side of this and find the place where a high tide raises all ships. Equality does not put anyone on the back foot, it puts us all on the same footing – which is a fundamental human right,” she said.

To close, the couple expressed optimism and hope found through watching the young leaders in the conversation striving forward for change.

“Keep up the incredible work and know that we are right there with you, standing in solidarity,” Markle said. “We’re going to get there … and we have a lot of renewed faith and energy in that having had this conversation.”

The Duke closed the conversation with the message that “this change is needed and it’s coming.”