Abbotsford’s third annual Fraser Valley Pride event will be held Ju­­ly 17 to 19. To accompany the festivities, City Council has voted to fly a rainbow striped Pride flag at City Hall from July 13 to 20, a decision that has received backlash from a local Christian group.

“Please be clear that “Celebration” is what this is about. Flag raising signifies affirmation, approval, and endorsement, and the wording of the request itself specifies “Celebration.” But should our city leaders be sending a message to the youth of Abbotsford that sexual immorality is worthy to be affirmed, approved, endorsed, and celebrated?”

This is a snippet of a post published by Richard Peachey on June 18 on his wife’s blog ‘Gerda Peachey’s Views.’ The couple uses the blog to vocalize their thoughts on controversial topics, writing from the viewpoint of practicing Christians. The issue of the Pride flag has taken centre stage after Richard’s post was scrutinized by the Georgia Straight.

“The over riding issue is that the Pride flag represents something to do with views on sex and sexual practices,” Richard Peachey says over the phone. “Why is City Council getting involved in that and taking some kind of stand and being involved in sexual politics at all?”

The origin of the rainbow flag dates back to 1978, designed by San Francisco artist Gilbert Baker, as a symbol of LGBTQ pride. In earlier versions, there were eight coloured stripes on the flag. Baker had assigned different meanings to each colour, with “sexuality” being represented by a hot pink hue.

That design has since been re-worked to six colours: red for life, orange for healing, yellow for sunlight, green for nature, royal blue for harmony, and violet for spirit. Sexuality is not listed in the rainbow emblem at all. 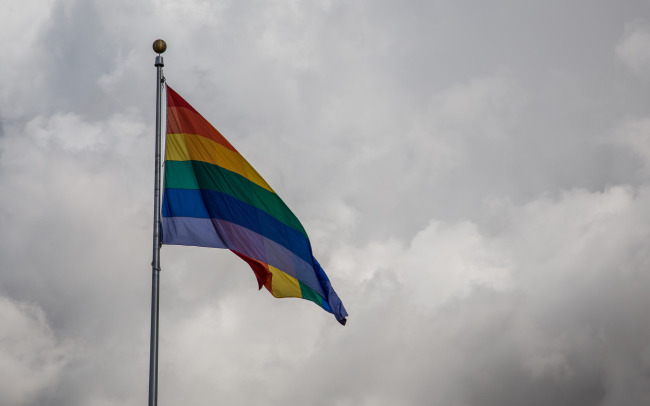 Colours of the flag (Tony Webster/Flickr)

“Really what [the flag] represents is diversity and inclusivity in a community,” explains Raymond Covenant, program coordinator for the Fraser Valley Youth Society (FVYS). “It celebrates our differences rather than anything else.”

The FVYS is one of the organizations behind the Fraser Valley Pride event. Covenant sat on the Pride planning committee that sent the initial request to Abbotsford Council to raise the Pride flag this July. Although the rainbow flag has been flown in cities around the globe for nearly four decades, Covenant believes now is the right time for it to make its way to Abbotsford.

“I don’t honestly believe this was overdue. Change takes time, attitudes change slowly, politics, bureaucracy … and I’m proud to say, from what I’ve seen, it is exactly what has been happening here in the Fraser Valley.”

Covenant suggests change happens slowly in Abbotsford because of its demographic. The Fraser Valley is nicknamed the “Bible Belt” of British Columbia, with 50 percent of Abbotsford’s residents identifying as Christian, according to the 2011 Census and National Household Survey.

Yet, Abbotsford is not the only community south of the Fraser where the Pride flag has been a contentious issue. The City of Surrey has previously denied flying the rainbow symbol at city hall due to their apparent flag policy, and have yet to make an announcement on whether or not a flag will be raised for this year’s June 28 Surrey Pride event.

Abbotsford, on the other hand, currently does not have a flag policy and has raised flags in the past for other causes without taking heavy flak. The most recent was in May of this year when flags for both Abbotsford Hospice Society and Canuck Place Children’s Hospice were flown to show support for National Palliative Care Week.

“Considering that the City has agreed to other requests in the past, and in the absence of a policy on what flags may or may not be flown at City Hall, Council felt it had no choice but to allow this request,” Councillor Dave Loewen wrote in an email.

The Peachey’s say the lack of a flag policy does not replace their concern with how quickly Council approved the rainbow flag. A video archive of the June 15 meeting shows the motion was proposed, discussed, and carried forward in less than five minutes.

“They should not have dealt with this quietly, without any debate, without any discussion of the divisiveness of it right at the end of an evening council meeting, that seemed a little dicey to me,” states Richard Peachey.

“Which given the nature of this city, you think they might of said to the city, hey we’re thinking of doing this,” Gerda Peachey chimes in. 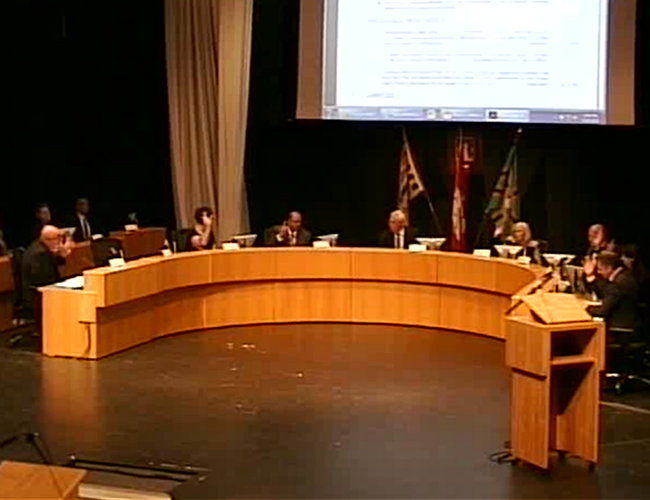 Moving forward, the Peachey’s may get their wish for Council to take more time with a decision on flag raising. Councillor Moe Gill requested an addition to the motion that asks staff to work on a flag policy.

During the council meeting on June 15, Councillor Loewen stated this before voting to carry the Pride flag forward this year: We’ll add that staff be directed to work on a policy that will eventually come back to Council at some future date but I don’t want to put a timeline on it.

Despite the Peachey’s stating the flag is representative of sexuality, Covenant assures the Pride event will actually be family orientated and focus on the message of diversity and inclusivity.

“We are not looking to recreate something that major metropolitan pride parades may put on,” Covenant refers to the sexual aspect of the LGBTQ community. “It’s not to take anything away from them, we are a different community. We’re not looking to be sexual overt or force any beliefs on other people, but rather just to be inclusive.”

The Fraser Valley Pride planning committee also requested to re-paint a sidewalk with rainbow colours, but is has been referred to City staff to further study this more permanent request.

Councillor Loewen also stated in the June 15 council meeting: I don’t suspect there will be any action on this, this year, but perhaps in the future we’ll have some kind of policy that will govern that.

Richard Peachey will be making a delegation before Abbotsford’s Council on June 29 where he will express his concerns on the Fraser Valley Pride flag. “I am going to challenge them to do what’s right for the community rather than be excessively concerned with being politically correct or with what the media might think.”

If you’d like to express your agreement or disagreement on the Fraser Valley Pride flag, you can send a message to Abbotsford’s mayor and council.

Quotes from Councillor Loewen at the council meeting on June 15 were sourced from the online archive of City Council meetings, which is in the public domain.