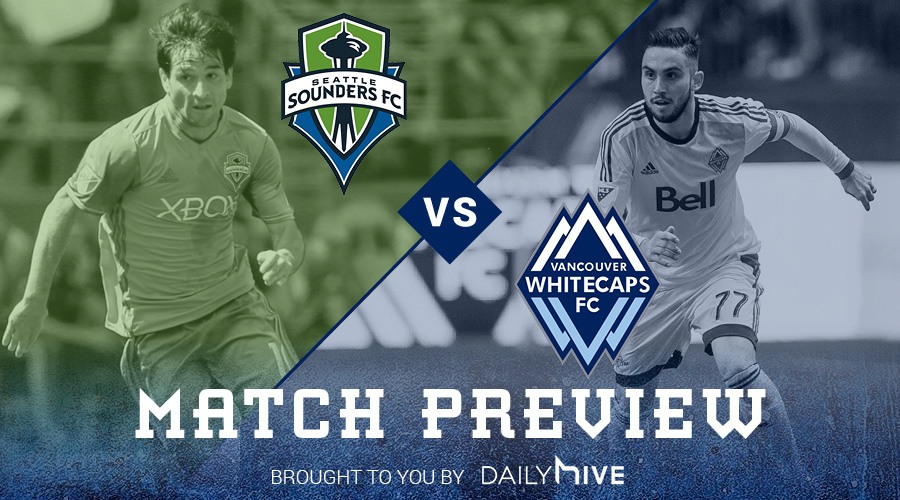 It’s been almost four months since the Whitecaps last played one of their Cascadia rivals. On Saturday they will play a much improved Seattle Sounders side at CenturyLink Field in the latest instalment of the biggest game of the year.

Vancouver’s season is hanging by a thread, and they need points in games like these.

The Whitecaps’ horrendous slide down the Western Conference standings this summer has been well documented, but they haven’t been the only ones who have struggled.

The Seattle Sounders won only five matches in their first 20 games of the season, and ‘mutually’ parted ways with long-time head coach Sigi Schmid at the end of July.

Since the departure of one of MLS’ most successful coaches, the Sounders have tallied a respectable 3W-1L-3D under the guidance of interim head coach Brian Schmetzer.

Interestingly, Seattle is winless in their last three matches drawing against Houston and San Jose, and losing to the Portland Timbers two weeks ago.

Seattle dropping points against other western playoff hopefuls is good news for Vancouver, who have played two more matches than the Sounders.

In an attempt to breath some life into their anemic season, Seattle brought in Nicolás Lodeiro on a designated player contract from Argentinian giants Boca Juniors just before the summer transfer window closed.

Nicolás Lodeiro does it again for the #Sounders on the road: https://t.co/HBGUno6rtT pic.twitter.com/oEeoUD10cn

The 27-year-old midfielder from Paysandú, Uruguay has had a profound impact for his new club scoring three goals and adding a further six assists in his first seven matches.

In other Seattle roster news Clint Dempsey is still sidelined after being diagnosed with a heart condition several weeks ago.

They call him Erik Hurtad-goal

Last week’s 3-1 win over Crew SC was important for a couple of reasons.

It was their MLS win since they beat Real Salt Lake way back on July 13th, and it was their first multi-goal game since the two-all draw against Orlando City on July 16th.

Against the Crew the Whitecaps got on the board thanks to a Gaston Sauro own goal in the 13th minute. The match remained tied until the 74th minute when Andrew Jacobson broke the deadlock scoring his second goal of the season. Erik Hurtado sealed the deal adding an insurance goal with less than 10 minutes to play.

MAPFRE Stadium in Columbus has been kind to Hurtado. On May 10th, 2014 Hurtado scored his first professional goal in a 1-0 win over the Crew.

There you have it! 3 Points on the road & a first @MLS goal from Erik Hurtado (@Etado19) #VWFC 1-0 over @ColumbusCrew. #GreatGame

It’s been a good week for Hurtado, who also scored Vancouver’s  first goal in the 2-1 win over Sporting KC in CCL action earlier this week.

The goals against the Crew and Sporting KC will undoubtedly give the Hurtado a boost to his confidence. Two weeks ago Hurtado had 7 shots in the one-nil loss to the New York Red Bulls at BC Place, and was by far the most dangerous player for the Whitecaps.

The problem was that despite all the glorious chances, Hurtado just couldn’t put the ball in the back of the net.

“All I can do from now on is work my hardest like I always do and come out here and train hard this week and get ready for Columbus,” said Hurtado after the loss to the Red Bulls.

Hurtado has worked hard and has been rewarded with playing time from head coach Carl Robinson. Hurtado in return has repaid his coach with two goals in two games.

Goals have been a rare commodity for the Whitecaps this season. With their playoff chances balanced on a knife’s edge, the Caps will need goals from wherever they can find them as they desperately look for a way to win games down the stretch.

All five of Vancouver’s remaining MLS matches are against Western Conference teams. Out of those five matches, four of them are against teams that are directly fighting Vancouver for a playoff spot.

The Colorado Rapids are sitting pretty in third place in the west, and have theoretically qualified for the playoffs. Portland, San Jose, and Seattle are all right in the thick of the fight.

The catch for Vancouver is that they will see a lot of Seattle and San Jose in the coming weeks. 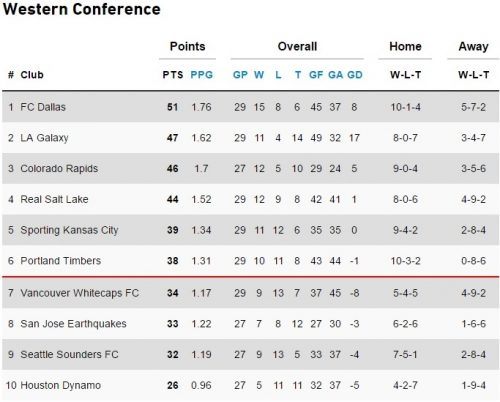 Both the Sounders and Quakes have two games in hand on the Caps. While the odds of the Caps making the postseason are not good at the moment, their fate is not totally out of their hands.

Vancouver can go a long way to salvaging their season by winning their matches against Seattle and San Jose. The rub is that with the two games in hand on Vancouver, their foes can still overtake them in the standings.

Going into Saturday’s match the Caps have history on their side. Vancouver has won four straight MLS matches in Seattle dating back to 2013.

Seattle has just three points from their Cascadia matches, so the Cascadia Cup will go to either Portland or Vancouver this year.

With two games against the Whitecaps in the coming weeks you can bet your bottom dollar that the Rave Green will do their best to spoil both the Whitecaps’ Cup and playoff dreams.