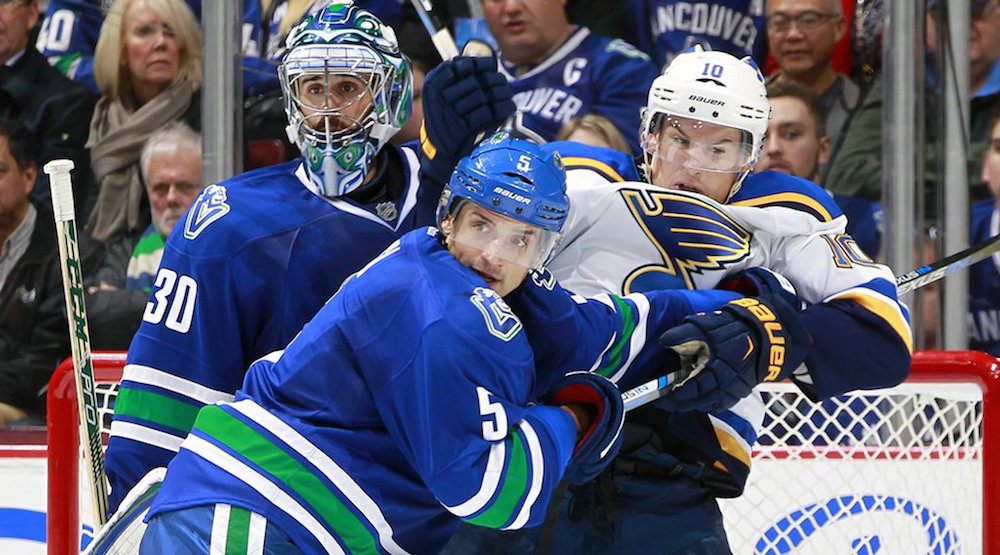 The Canucks won 4-3 in OT against the Carolina Hurricanes on Sunday night in a wildly entertaining game. With two wins and no losses, Vancouver is undefeated and will look to remain so tonight against a powerful St. Louis Blues team.

The Blues have hit the ground running, with three consecutive wins against the Blackhawks, Wild, and Rangers to start the season.

Jack Skille will make his Canucks debut, as he draws in for Jake Virtanen.

Via @EliasSports: The @Canucks rallied from a three-goal deficit to win a game for the first time since Dec. 8, 2011 (4-3 SO W at MTL). pic.twitter.com/YUO5wIOhlA

Starting the season 2-0-0 is great news for the Canucks and their fans, but doing so by overcoming 3rd period deficits in both games is a massive surprise.

As per Elias Sports, the Canucks had not rallied back from a three-goal deficit, as they did against Eddie Lack and the Hurricanes on Sunday, since December 2011. Suffice it to say, this is shocking coming from a 2016-17 Canucks team that was supposed to have issues scoring.

Do not be fooled. No successful NHL team can afford to be down in games early and going into the third period on a regular basis. The comeback wins are fun, but don’t get used to it.

1 goal and 1 assist for Markus Granlund who leads the Canucks in scoring this season. Pin this tweet.

Who is Markus Granlund?

The Canucks acquired Granlund from the Calgary Flames last season for AHL prospect Hunter Shinkaruk in a deal that angered a lot of fans. The jury is out on the deal with Shinkaruk still finding his way in the AHL, but the Canucks appear to have landed a very useful player.

Granlund is versatile, strong defensively, and looks to have some scoring touch. He isn’t flashy, but he is smart and seems to be able to find open seams in the offensive end.

More in the Dreger report tomorrow, but sounds like Ken Hitchcock isn't entirely closing the door on coaching beyond this season.

The St. Louis Blues are an intriguing team in that they will be highly competitive in the Central Division and there is a lot going on off the ice.

The Blues lost their captain, David Backes, in free agency to the Boston Bruins. Backes signed a Ryan Kesler-type deal with the Bruins (aka – not good) at five years with an AAV of $6 million.

They also traded their 1A or 1B goalie, Brian Elliott, to the Calgary Flames in exchange for draft picks. Neither are big losses for the Blues considering Backes’ age and the fact that it appears Elliott’s numbers benefitted greatly from Ken Hitchcock’s system.

The most puzzling development of the offseason was the revelation that this would be Hitchcock’s last season and Mike Yeo, ex of the Minnesota Wild, was brought in as the successor in waiting. It is bizarre to have a coach working a bench in his last year with the future coach right beside him. Oh yeah, to make it even more awkward, Hitchcock apparently might not have totally decided this is his last year. Odd to say the least!

After successive home wins, the Canucks competition steps up a few notches. St. Louis takes the early lead and the Canucks can’t overcome it. Vancouver loses 5-2 to the Blues and reality starts to set in amongst the fanbase.