The NHL and a small army of installation crews have been working around the clock to build and prepare BC Place Stadium’s ice surface in time for Sunday’s 1 p.m. Heritage Classic game between the Vancouver Canucks and Ottawa Senators.

By early Wednesday morning, crews began to spray 10,000 gallons of water onto the portable NHL-sized rink that will be frozen into a two-inch thick sheet of ice. A refrigeration trailer, manufactured specifically for the NHL’s stadium-sized outdoor games, pumps coolant into the rink’s aluminum floor.

White paint has also been added in between the layers of the ice to provide the rink a pure white appearance that contrasts well with the puck. Lines and the NHL Heritage Game logo were also painted onto the frozen layer before more water was poured onto the surface to create a finishing layer of ice.

The temperature of the ice surface is kept at -5.6°C and monitored 24-hours a day by sensors and crews. It remains to be seen whether Sunday’s game will be played with an open or closed roof, although light rain or snow would still permit an outdoor open roof game to be played.

A final decision on the roof’s opening will be made on Sunday morning – current Vancouver weather forecasts by Environment Canada expect rain showers or flurries with a low of 2°C and a high of 6°C. 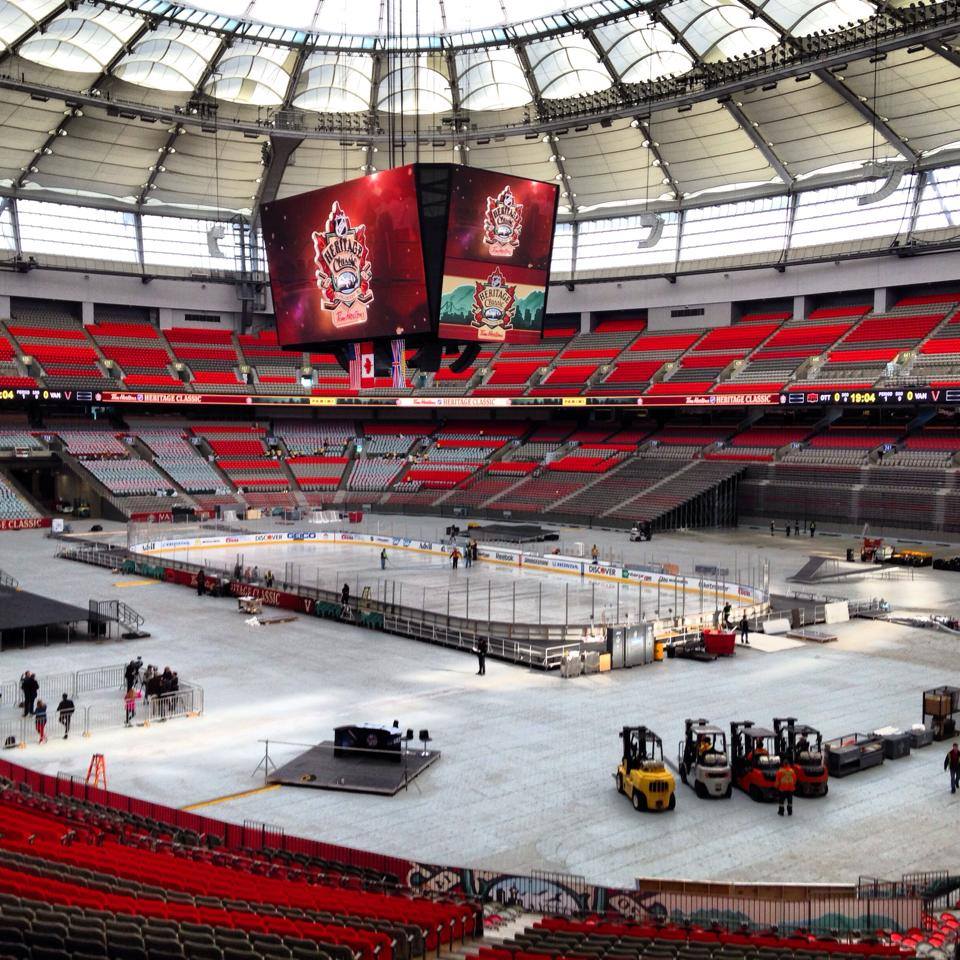 At the moment, there are concerns that many of the stadium’s 55,000 seats (nearly three times the capacity of Rogers Arena) have yet to be sold: empty seats might be a problem during the game given the varying (depending on who you ask) high numbers of available tickets. Poor view-lines and high prices, even for the nosebleeds, set by the NHL could be to blame.

Tickets are still available on both Ticketmaster and through websites like Craigslist. This year also marks a major expansion of the NHL’s outdoor/stadium-sized events beyond the traditional home team hockey arenas.

Ahead of Sunday game, the NHL is hosting three consecutive days of FREE pre-game fan experiences. This will climax with Sunday morning’s (9 a.m. to 1 p.m.) massive Fan Festival at the Plaza of Nations. Members of the 1994 Canucks team, the team that was one game away from the Stanley Cup, will also be making an appearance during the match’s opening ceremony.

The puck drops at 1 p.m. Sunday and the game will be aired live on CBC TV.

The view of BC Place from section 407, row ZZ, seat 101. Top of the stadium but a pretty good spot for the game pic.twitter.com/drAfYESNXI

I’m not sure if i’m going to love BC Place more for Canadian Football or the Heritage Classic. #GoSensGo #GoBCLions pic.twitter.com/8kUMCLDmEZ

Outstanding view from inside BC Place as the @NHL prepares for the Heritage Classic on Sunday. #Canucks #outdoors pic.twitter.com/OA2QBkhCEy — AL MURDOCH (@ALMURDOCH) February 28, 2014

The final #HeritageClassic game @bcplace happens this Sunday. Who R you cheering for? RT 4 Canucks or FAV 4 Senators pic.twitter.com/FKYOUSIyIW