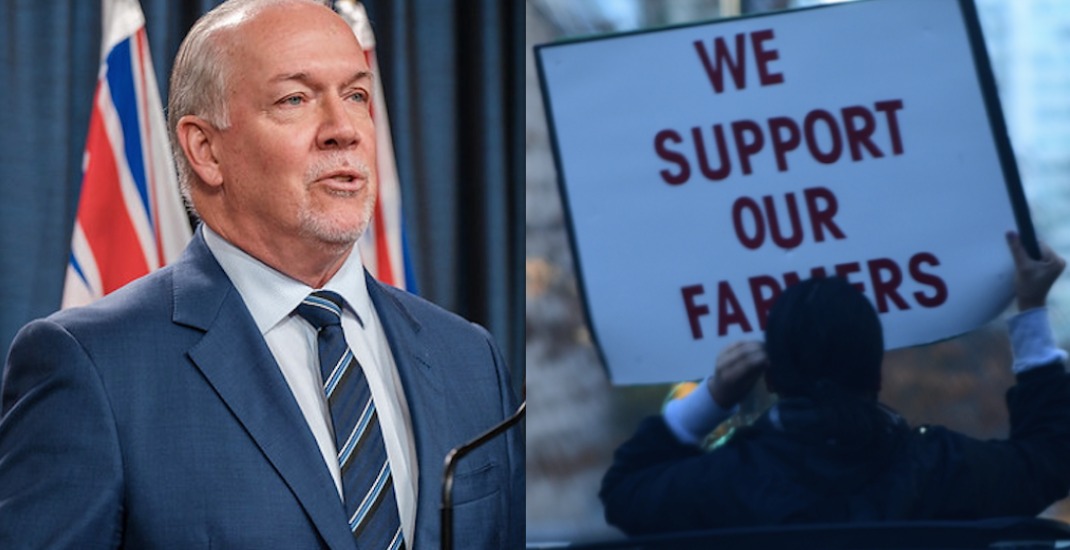 Premier John Horgan has asked Prime Minister Justin Trudeau to urge the Indian Government to find a peaceful resolution to the ongoing farmers’ protests in the country.

In a letter sent to Trudeau on February 11, Horgan highlighted the impact the protests have on the Punjabi communities living in BC.

“Thousands of British Columbians have family, friends and loved ones directly and indirectly affected by this issue. Many of them have multi-generational ties to farming communities in Punjab and are increasingly worried for the safety of their loved ones,” stated Horgan.

Today Premier @jjhorgan wrote Prime Minister Trudeau. We requested that he urge the Indian government to find a peaceful resolution to the farmers protest in India.

A cornerstone of a democracy is the right to protest peacefully and for the media to have the right to report. pic.twitter.com/YNytRvyrbr

“It has been extremely stressful for them to witness the reaction to the farmers’ peaceful protests over the past two months.”

Horgan stated that he appreciates Trudeau’s “ongoing engagement on this issue” but asked him to “continue, together with other international partners to encourage the Indian government to seek a peaceful resolution” to the protests.

The demonstrations in India and across the globe have been calling on Indian Prime Minister Narendra Modi and his government to repeal three recently passed agricultural laws.

The situation in India has escalated since January 26, after hundreds of thousands of farmers took to India’s capital of Delhi on the country’s Republic Day to continue their protests.

During the Republic Day demonstrations, some groups of protesters clashed with police and entered the historic Lal Quila (Red Fort), and at least one farmer was reported dead.

Since then, several journalists and politicians in India have also been charged with sedation for reporting on the protests.

“They have been charged with misreporting, spreading disharmony and inciting riots via their tweets on Republic Day,” noted Amnesty International in a statement released on February 9.

Most recently, Delhi police arrested 22-year-old environmental activist Disha Ravi, who shared and edited an online “toolkit” — a web document that had information about the farmers’ protests and how to raise awareness.

Police claim the toolkit document was intended to “wage economic, social, cultural and regional war against India,” and they believe Ravi shared the document with teen climate activist Greta Thunberg, who has been a prominent voice in support of the farmers.

Trudeau voiced concerns in November about the ongoing situation and the rights of farmers during a video call with several Sikh Liberal MPs.

“The situation is concerning … Let me remind you, Canada will always be there to defend the rights of peaceful protests,” stated Trudeau at the time.

“We believe in the importance of dialogue, and that’s why we’ve reached out by multiple means to Indian authorities to highlight our concerns.”

The Indian government’s Ministry of Affairs responded to Trudeau, calling his comments “an unacceptable interference in our internal affairs.”

Most recently, Trudeau spoke with Indian Prime Minister Modi on February 10, where the two leaders discussed vaccine distribution. Modi said he assured Trudeau that India would “do its best” to assist Canada with its vaccine supply.

Was happy to receive a call from my friend @JustinTrudeau. Assured him that India would do its best to facilitate supplies of COVID vaccines sought by Canada. We also agreed to continue collaborating on other important issues like Climate Change and the global economic recovery.

According to a statement from Trudeau’s office, the two leaders also “discussed Canada and India’s commitment to democratic principles, recent protests, and the importance of resolving issues through dialogue.”