Ever wanted to grow six different strains of weed while attempting to avoid the buzzkill known as law enforcement – all from the comfort of your own home?

You could start your own grow op*, or you could get yourself a copy of “Pot Farm” – the first ever weed themed board game, developed by Vancouver’s East Side Games. 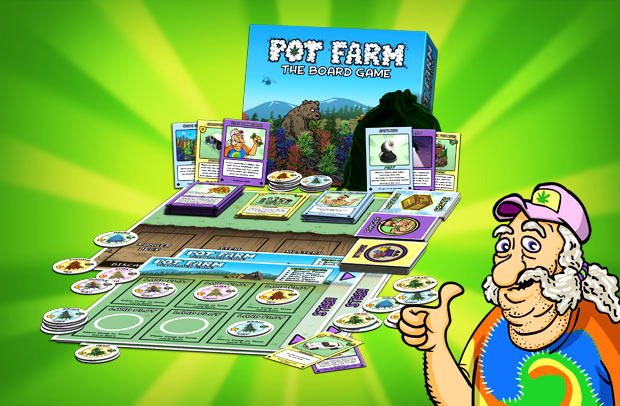 The game is an adaptation of the popular Facebook game of the same name that’s seen more than six million players over the four years since its release. In both games, the objective is to see who is the “ultimate Pot Farmer” by growing outrageous plants and buying improvements for your farm, all while avoiding the drug raids of “Ranger Dick”.

Though the board game version largely stays true to the roots of the original Facebook game, according to Mark Woo of East Side Games, certain aspects needed to be changed to make it playable.

“The board game was inspired by the Facebook game for sure, and a lot of the game mechanics translated very well to the physical format,” he says.

“Things like ‘Farm Protection Levels’ were very simple, but plant grow times from the Facebook game didn’t make sense in a game that lasts less than an hour. We came up with a board game that will appeal to both veteran Pot Farmers and newbies alike. It is both a homage to the source, and uniquely fun in its own right.”

Learning what makes a game fun isn’t necessarily as easy as many think, but with four years of experience developing the Facebook version, East Side Games is hoping that experience translates into the board game world.

“Four years for a Facebook game is incredibly rare. We’ve definitely learned through the years what our fans love to see,” says Woo. “Our fans are vocal on what they want and we just try to listen to them as much as possible.”

East Side Games is currently raising money for the game over on Kickstarter, with a bunch of cool goodies available for going above and beyond the $15,000 fundraising goal.

“‘Hemp Bags’ is our studio’s favourite for putting in every copy of the base game. It is very thematic and super versatile, our fans can use it for whatever they want. In fact, Panda Games, our printing partner who is headquartered in Vancouver as well, went out of their way to offer “Hemp Bags” as an option.”

“People should enjoy the game however they’d like,” says Woo.

“It’ll be a blast one way or another!”