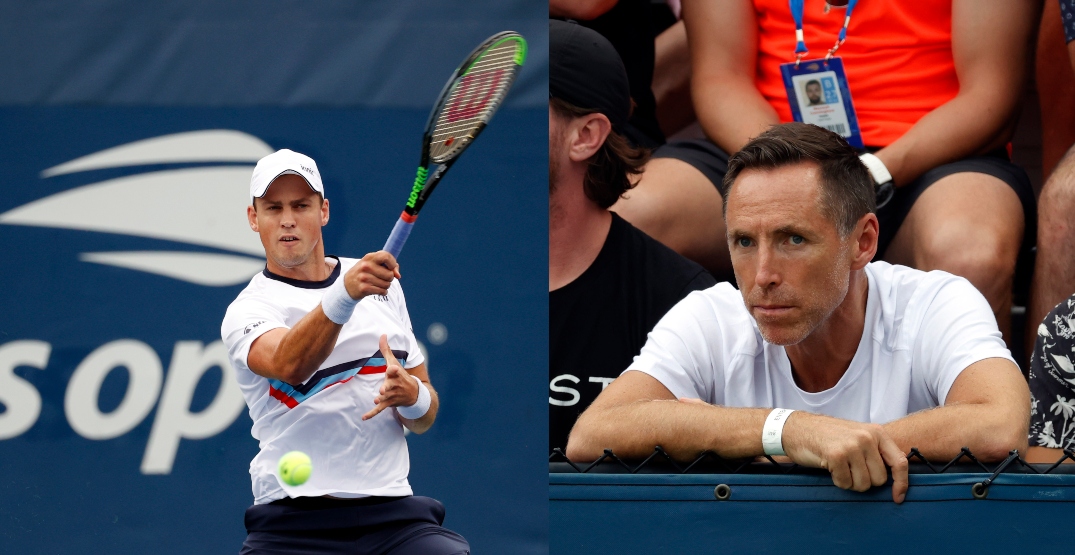 It’s not unusual to see celebrities at the US Open.

The New York tennis Grand Slam is a glamorous event, and a place to be seen for the rich and famous.

Celebs, however, don’t often do what Steve Nash did on Tuesday.

The Canadian basketball legend made an appearance on Court 10 to cheer on his friend and countryman Vasek Pospisil during a first-round match. Far from centre court, Pospisil pulled off a remarkable comeback upset over No. 28 seed Fabio Fognini of Italy.

🇨🇦 Vasek Pospisil with the comeback, upsetting 🇮🇹 Fabio Fognini to advance to the 2nd round of the #USOpen pic.twitter.com/E3l0zHrrNa

A native of Victoria, Nash shares a BC connection with the Vernon-born Pospisil.

“Even just his presence is helping my tennis career today,” Pospisil joked when asked how his relationship with Nash has helped his career in a television interview with TSN’s Mark Roe. “Steve is just such an amazing guy. We’re great friends. We don’t get to catch up too often, so it was awesome that he’s here and [it was] super nice that he came out to cheer me on.”

“Every time I looked over there I’m like ‘Ah, I got to keep fighting, Steve’s here!'”

“What a battle. This one was special,” Pospisil said on social media after the match. “So much support out there, loved every minute of it. Shout out to those urging me on throughout the match. You guys are the best. See you on Thursday.”

Pospisil’s next match is against No. 53-ranked Ilya Ivashka of Belarus.

It’s been a very successful US Open for Canadians so far, as five Canucks advanced to the second round, including Bianca Andreescu, Leylah Annie Fernandez, Denis Shapovalov, Felix Auger-Aliassime, and Pospisil. Fernandez is already off to the third round with another win today.