Meeting Donovan Mahoney happened on a very wet Saturday morning, the kind that beats paper litter into clumps of soggy pulp on the street.

Inside East Van Roasters, a PHS Community Services Society enterprise, Mahoney flashes a grin and offers a gentle handshake. Before this first meeting, the only reference point to Mahoney was his Instagram, which has amassed a loyal 4000 followers.

His avatar is a self-portrait conveying a face with a hard expression, like that of a mobster or professional bodyguard. The subject matter (and talent) in his Instagram is gaining notoriety in Vancouver.

Mahoney’s prints of scenes in the DTES, an area he called home while living with a heroin and cocaine addiction, are now beginning to adorn the walls of local businesses and people’s homes. He was also named Huffington Post’s B.C. photographer of the month last August, had his first photo exhibit at The Wallflower diner in January and got married last June.

Prior to that, the City of Vancouver commissioned nine photographs of the DTES from Mahoney to be utilized through his social media using the #healthycity4all hashtag, which trended in Canada.

We commiserate about the wet weather.

“I was driving my wife this morning and said, ‘I would not want to be on the street today’,” says Mahoney, referring to those living on the streets.

Mahoney had been living on and off the streets of the DTES for most of his life with a heroin and cocaine addiction before reaching sobriety in 2012 and focusing seriously on photography.

In the small corridor-sized coffee shop, we are sitting at the furthest end of a row of four tables, opposite each other. He is a visual paradox. His face has a no-bullshit countenance, a penetrating gaze, and eyebrows that naturally furrow together to create peaks and valleys on his forehead. But, like sunshine through tall trees, Mahoney’s friendliness breaks through the burly exterior.

“I took pictures for granted; I didn’t think they were a real serious thing. Like, when I looked at magazines, I thought ‘that’s a beautiful picture,’ I wasn’t able to connect at that time in my life that somebody was able to see that and communicate that to the world. My life didn’t allow for me to do any real thinking past survival. Because I was always being moved from foster home to foster home to different programs, I didn’t have stability to think more or follow this up.”

Mahoney went into foster care when he was four years old, after his parents died. His father passed away from a fall down a flight of stairs, his mother committed suicide a year later and Mahoney was left to fend for himself and his one-year-old sister until he was taken to stay with relatives.

It was a string of foster homes and care programs until he was adopted at the age of seven, but at nine years old he began running away to the street and by the age of 11 was back in the foster care system. Drugs and alcohol started at an early age and at the age of nine he had his first blackout drunk experience.

“I didn’t feel good there. It was actually a safe place to be, but to me it felt unsafe. Safety as I understood it was no food, no meal times, no bed times. Being loved and having rules and structure was very uncomfortable and unsafe to me, so I ran away.”

Mahoney sips the last of his Americano and then we snap photos of each other, I on my iPhone and Mahoney on his Sony A7 with a 35 mm 2.8 lens. I double tap at Mahoney’s back-lit darkened mug on my phone’s screen to allow in more light and quickly capture the image. Mahoney glances around and then stands up on his seat, bringing him closer to a window. He angles his camera towards me and asks me to look up at him.

Afterwards, we head to Stretch Vancouver, an art and yoga studio space, to see some of his photos in large scale that the studio bought to decorate their place.

Lying in a pile on a table in the center of the room, he sifts through them tenderly as if they are printed on ancient papyrus paper. He holds up a photo of “Native Dave,” a black and white shot of a man’s shirtless back, head slightly turned, his face hidden in a shadow. The focal point of the photo is the intricate tattoo covering the man’s upper back. He is standing at an intersection of Columbia Street, beyond him unfolds the Eastside scenery: the Balmoral hotel and a TransLink bus sitting in traffic.

The Downtown Eastside (DTES) is an area of downtown that extends into Vancouver’s Eastside, one of Vancouver’s oldest and poorest neighbourhoods, also known popularly among suburbanites and tourists as Vancouver’s seedy underbelly.

Vancouverites are familiar with this DTES, as it is home to the homeless, poverty-stricken and drug addicted. Wedged in between the DTES and the Eastside are the wide, red- and gold-spangled streets of Vancouver’s Chinatown, displaying a veritable of cheap, authentic Asian merchandise, food and tables of dehydrated seafood and fungi sprawling out of storefronts.

In the beginning of the twentieth century, the DTES was the hub of the city. Carnegie Centre opened in 1903 and City Hall opened on Main Street in 1897 – both architectural beauties. Woodward’s Department Store’s second location on Hastings and Abbott also opened in 1903.

It wasn’t until the late 70s that the area began to decline when the city centre moved west, and hard drugs became rampant in the streets in the 80s. Other neighborhoods, like the West End, began campaigning to have street prostitutes removed, which left them to the DTES.

Those unfamiliar with this area may keep their eyes downcast and gait brisk while walking through. A true blue Vancouverite knows that good seafood and produce for good value can be found here (no organic). Some have grooved to live tunes at the Balmoral pub, or purchased beer at the Astoria – and that in the back are stairs that lead down to a boxing gym and from these depths have emerged Olympians (Manny Sobral and Dale Walters) and league champions. They’ve perused through the DTES street market and discovered restaurant-grade patio heat lamps for a great deal. Happening upon an elderly Asian couple sitting on a bench with bags of groceries while a few feet away a homeless individual who is on the high of his life is all part of the scenery.

Today, in amongst the antiquated buildings of the Hotel Empress, Carnegie Hall, and Balmoral are new establishments revitalizing the otherwise desolate area, like nightclubs, coffee houses, and restaurants.

The DTES has its unique charm and Mahoney captures it on his camera. His portraits of those living on the streets tear through the hard-lined faces, tattoos, and tough street demeanour to reveal a person, one that we might be able to relate to. 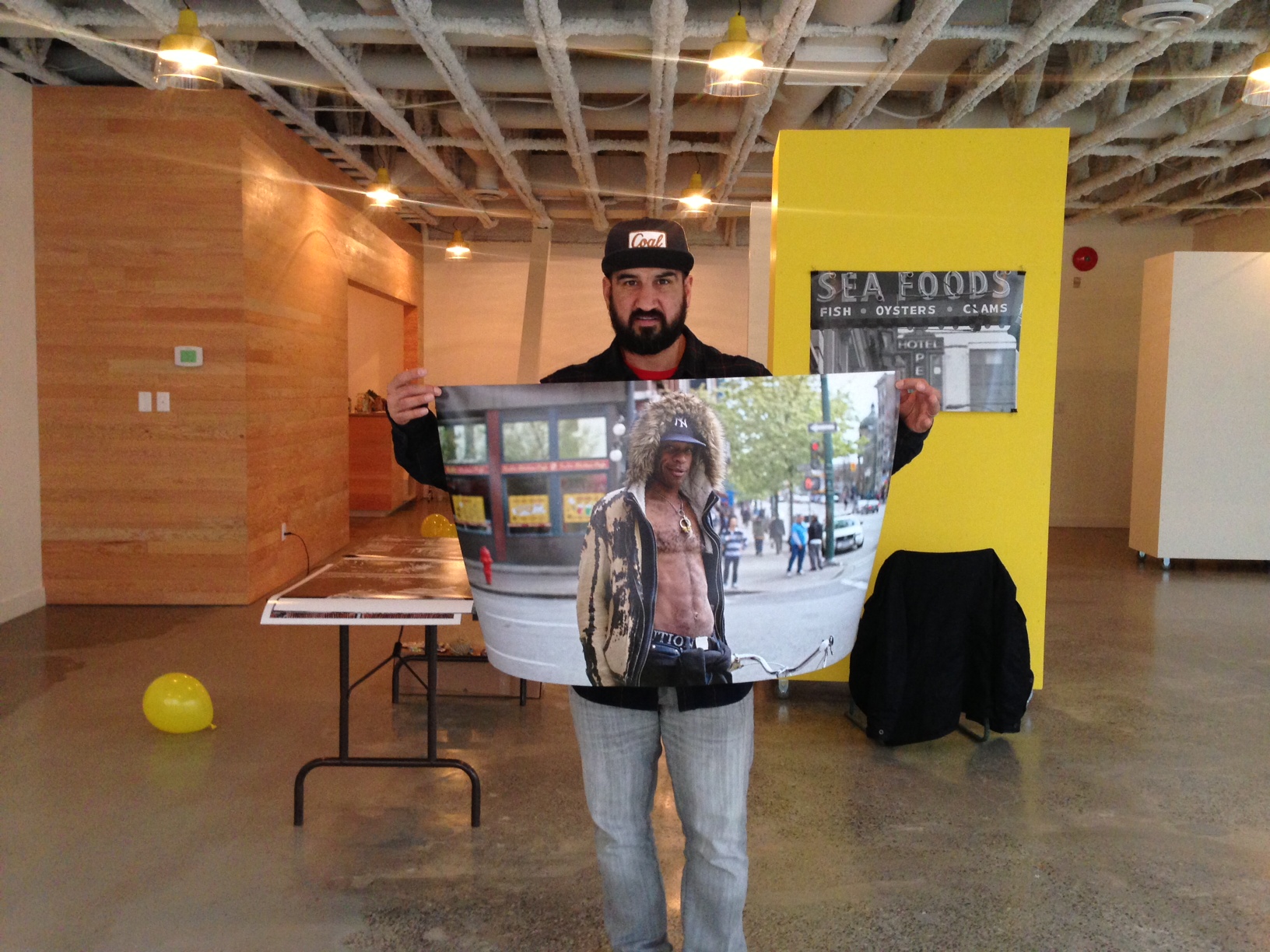 “I was over here in this alley and it was pouring rain. I’m not sure that I was really dopesick necessarily, but I needed to not feel the way I was feeling. I was running around with this guy that was probably the most violent guy down here and he gave me some dope and then I needed to get away from him because police were always looking for him. So I came over here and I had my dope and I put it into a needle. As I was putting it in a needle I saw the police and I pushed the plunger in to hold the drugs (in the needle) and I had a cap. I knew they were going to come and they were going to break my rig or tell me to throw it away. So they were like, ‘what are you doing?’ And I was like, ‘oh, I just did a fix.’ And they were like, ‘get rid of the needle.’ And I was like, ‘fuck.’ And they made me put it into the needle box and it was this really terrible moment for me. How do I get this out of there? They drove away. And I had put it in the needle dispenser in such a way that I could pull it back out. I realized that I couldn’t be out in the street anymore, in that moment. I never used the safe injection site before and it was that moment of being out in the pouring rain and the police coming around the corner and in a sense kind of giving me a break because they could’ve given me a hard time and they didn’t really know what was in the rig. I got the dope out and I went up to the safe injection site for the first time and I did dope there. That was the beginning of me leaving the street.”

“. . .There was a huge relief in knowing that there’s medication in this camera. And the fact that people really appreciated it became really wonderful. . .I do this for me because I actually have to. . . it’s because if I don’t I think the possibility of me relapsing are pretty high. Because I see the worst in the world, and I’m very aware of what’s going on in the world, which is very challenging. I don’t have the distractions that other people have.”

Currently, Mahoney is working on a book of selected photos and a photo exhibit in the DTES, he also has an exhibit at Commercial Street Café ending this month. You can connect with Mahoney at www.donovanpee.com.