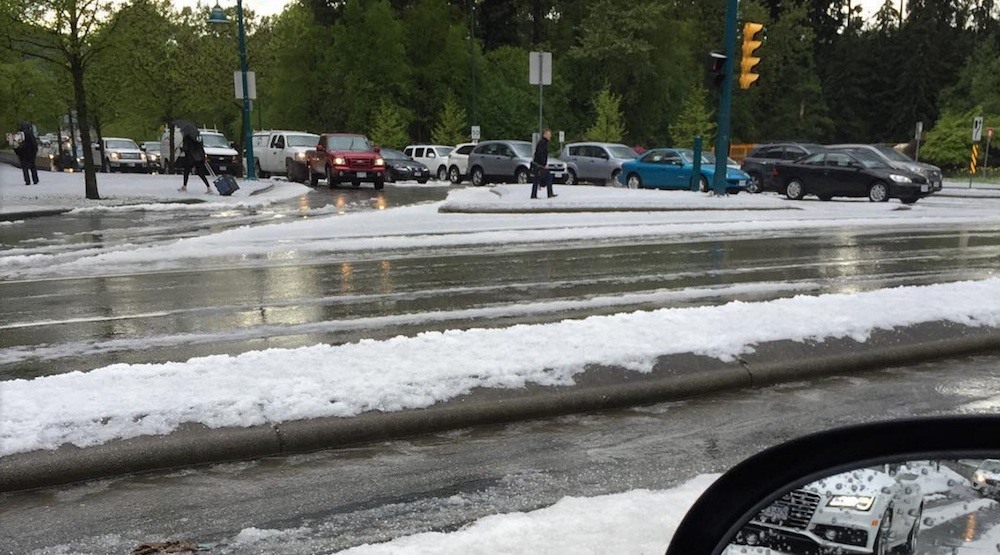 A thick layer of hail from a thunderstorm on a road in Port Moody. (stephhealy74 / Instagram)

The Tri-Cities had a brief throwback to winter this afternoon when a fast-moving thunderstorm dumped heavy hail into the area.

Photos and videos posted onto social media show roadways, grass lawns, and vehicles in Port Moody and Coquitlam covered with a thick layer of hail and slush. Other areas on the storm’s path saw periods of heavy rainfall.

Residents in Metro Vancouver were warned by Environment Canada about the risk of thunderstorms beginning in the afternoon.

As for the forecast for the coming weekend, there is no extended reprieve in sight as more rainfall is expected through at least early next week.

Crazy hail storm in Port Moody just now. It looks like winter out there on the roads @NEWS1130Weather @NEWS1130Traffic pic.twitter.com/lVpHoLhT2G

It’s snowing hail on Heritage Mtn in Port Moody! Did you predict this @YvonneSchalle ? pic.twitter.com/Rr5eTcdHtz

No, not snow. Just a little May hailstorm. . . . #hailstorm #portmoody #weather #storm #may

Patio weather?????? Goddammit Mother nature get your act together

Patio weather?????? Goddammit Mother nature get your act together