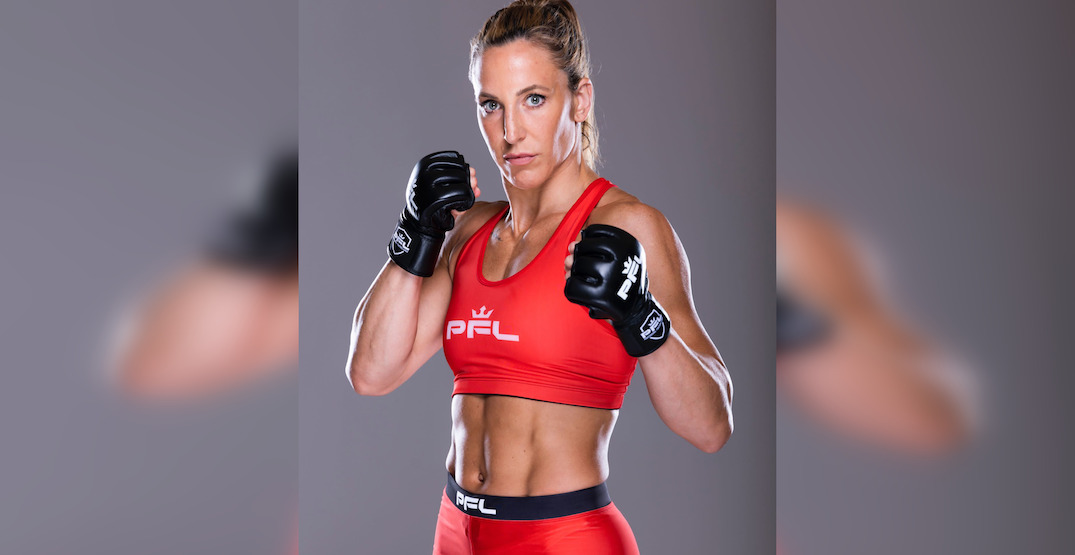 Port Moody’s Julia Budd has been fighting the toughest women in mixed martial arts since 2010. It’s rarely been easy, but she now finds herself on the precipice of some life-changing opportunities.

After a lengthy stint with Bellator MMA, Budd recently inked a deal with the Professional Fighters League (PFL), a fast-rising MMA promotion that presents the sport in a unique, seasonal format with playoffs, finals, and million-dollar prizes for the champion of each division.

“We’ve been talking to PFL since May, on-and-off,” the Port Moody native told Daily Hive in Fort Lauderdale, Florida. “We decided this was definitely the best route to take and what we wanted to do.”

Budd will make her PFL debut in a special showcase fight against Kaitlin Young tonight in Fort Lauderdale. She’s been aware of Young for quite a while and is counting down the minutes until they’re locked in the cage together.

“I’m super excited,” she said. “I’ve known about her for a long time. I’ve studied her. I’ve been aware of her skills for a long time because we fought on the same card for Invicta [Fighting Championship], so when they mentioned that she’d be my opponent, we were like ‘this is perfect.'”

Once her PFL debut against Young is in the rear-view, Budd will begin readying herself to compete in the 2022 PFL season. Her weight class, the 155-pound women’s lightweight division, is populated by a number of dangerous fighters, but none hold a candle to the unbeaten Kayla Harrison, a two-time Olympic gold medalist in judo, and one of the best female fighters in MMA today.

Budd isn’t just unintimidated by Harrison; she actually relishes the possibility of fighting her. Her confidence is impressive, but not particularly surprising, considering she’s already fought the likes of Ronda Rousey, Amanda Nunes, and Cris Cyborg—all ranked among the greatest female fighters of all time.

“I’ve been fighting the best of the best my whole career,” Budd said. “[Harrison] has obviously been a dominant champion for PFL. [Fighting her] was something we weighed out, and we were like, ‘this would be a great fight.’

“I don’t know [how she compares to Rousey, Nunes and Cyborg] yet,” she added. “She has been dominant and undefeated in PFL, but who knows.”

As alluring as a showdown with Harrison is, Budd’s main goal is the million-dollar payday that awaits the 2022 PFL women’s lightweight champion.

“When I started out, I think I was getting paid two or three hundred bucks fighting locally in Vancouver,” she said. “It took me a long time to get where I am.

“[The million dollars] is the end goal, obviously,” she added. “For me, it’s always one step at a time. That’s how I always take my career, so this fight [with Young] is my number one priority. I need to get in there, do all the things I plan to do, and come out with my hand raised, then start the 2022 season, one step at a time, one fight at a time, all the way to that finale.

“[Winning the million-dollar prize] would be amazing. It’s definitely on the list of goals, and one of the reasons I signed with the organization.”

If Budd pockets a million dollars at the end of 2022, you won’t find her rolling around Port Moody in a new Porsche. Her only plan for the money—should she win it—is to take care of her family.

“Living a good life with my family,” she said with a smile when asked how she’d spend her prize money.

Winning the 2022 PFL lightweight championship will cement Budd’s status as one of the greatest female fighters competing today. That feat will be made even more impressive by the fact that, unlike many other Canadian fighters, she’s never relocated her training to the United States.

Everything she’s accomplished has been earned with sweat and blood inside Port Moody’s hallowed Gibson MMA gym—also the training home of her husband Lance Gibson and stepson Lance Gibson Jr.

“I have an amazing team,” she said. “You don’t necessarily need to go to one of those big gyms [in the US] with tons of people. I have amazing training partners in Port Moody like my stepson, my husband. We’re all fighters. We’re each other’s best training partners, so I’ve been able to do it locally, and that’s something I’m super proud of.”

A 2022 PFL title win will also solidify Budd’s reputation as one of the faces of Canadian MMA. PFL CEO Peter Murray recognizes her status as one of the most accomplished fighters from the Great White North and believes she could be a crucial part of the promotion’s expansion into the country.

Murray is even interested in bringing the PFL to Vancouver, with Budd and her fellow British Columbian Rory MacDonald on the bill.

“There’s a huge fan base up in Canada,” Murray told Daily Hive. “We have Rory MacDonald from Canada, OAM [Olivia Aubin-Mercier] and now Julia joining the league. It’s great. It will continue to fuel and grow the fan base there for the PFL, and absolutely we plan to stage there in the very near future.

Budd, for her part, is unsurprisingly on board with those plans, having not fought at home since the earliest chapters of her career.

“A Canadian show would be huge,” she said. “It would be awesome to have everyone there. So much family, and so many friends and fans would come out because it’s local.”

Suffice it to say that there are big things on the horizon for the fighting pride of Port Moody. Many of those things, of course, seemingly hinge on the outcome of her imminent showdown with Young.

She doesn’t intend on returning to BC without the W.

“I’ll get my hand raised in any way possible,” She said. “I’ve had an amazing training camp. I’m coming home with a victory.”