UPDATE: As it turns out, the Porsche was involved in a hit-and-run and was driven by an unlicensed 16-year-old. Read more here.

A video of a white Porsche Cayenne getting trashed – allegedly right here in Vancouver – while its owner tries to park it will likely leave you with questions.

To start with, the luxury SUV appears to be at a terrible angle and already has damage to the front right wheel that’s resulted in the tire popping off. That likely didn’t help things, but how did it get that way in the first place? 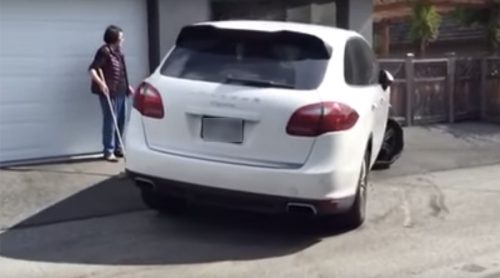 At any rate, the driver tried to pull the rather large vehicle into a tiny garage facing a laneway. In their attempts to get it in, they damage it even more and take out a chunk of the garage for good measure.

You’ll probably have your hands over your mouth in disbelief as you watch this driver destroy a car that retails for between $70,000 to $180,000, and the sounds of the motor desperately revving only adds to the cringe factor.

Check out the video above, which is already picking up steam online attracting almost 10,000 views at the time of writing.