An online survey conducted by Vancouver-based polling company Insights West suggests that if a federal election were to be held tomorrow, British Columbians would cast more ballots for the New Democratic Party (NDP) over the Conservative Party and the Liberal Party.

The results come just over a week after the NDP’s Rachel Notley won a majority government in neighbouring Alberta, ending the 44-year governance of the Progressive Conservative Party in the province.

In Metro Vancouver, the NDP is tied at 32 per cent with the Conservatives. However on Vancouver Island, support is at 47 per cent for the NDP.

When it comes to performance approval, 58 per cent British Columbians disapprove of Prime Minister Stephen Harper, while 35 per cent approve.

NDP Leader Thomas Mulcair holds the best approval rates, with 52 per cent, while Liberal leader Justin Trudeau follows second at 46 per cent, and Green Party Leader Elizabeth May at 44 per cent. But oddly enough, when asked who would make the best prime minister, Stephen Harper led with 27 per cent, while Mulcair fell to 22 per cent, Trudeau with 19 and May with 6.

The poll was conducted from May 7 to May 9. The margin of error is plus or minus 3.1 percentage points. 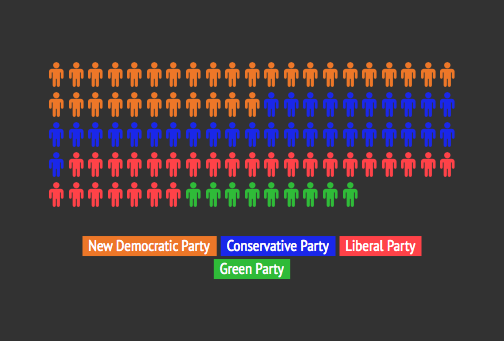