Surrey RCMP is requesting the public’s assistance in identifying and locating a suspect involved in a trespassing incident that led to a dog being attacked with a knife this past spring.

On Monday, April 28, at approximately 7:30 p.m., the Surrey RCMP responded to a report of a male stabbing a dog in the 12700 block of 58th Avenue. Upon attendance, officers were informed that a lone male suspect had trespassed onto a private property in an apparent effort to take a shortcut.

Once on the property, the suspect was confronted by the owner’s dog. According to the owner, she heard her dog bark and then observed the suspect swinging a knife and stabbing her dog. When she screamed at the suspect to stop he jumped over the fence and left. Despite extensive patrols by officers the suspect was not located. The dog (“Spirit”), a Belgium Shepherd, suffered multiple stab wounds to his face and head and had to undergo extensive surgery.

After speaking with witnesses and viewing surveillance footage in the area, police now believe the suspect is a white male in his late 20s to early 30s with a medium build and dark hair, wearing a checkered shirt, backpack, and jeans with a rip near the knee area (please see attached photo).

Investigators have been unable to identify the suspect thus far and are now appealing to the general public for their assistance. 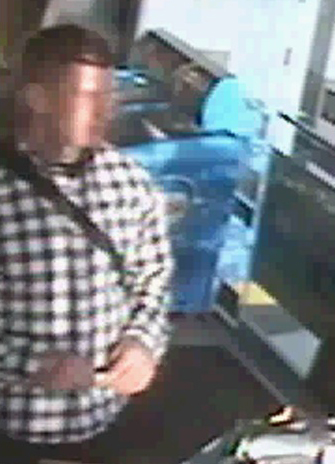