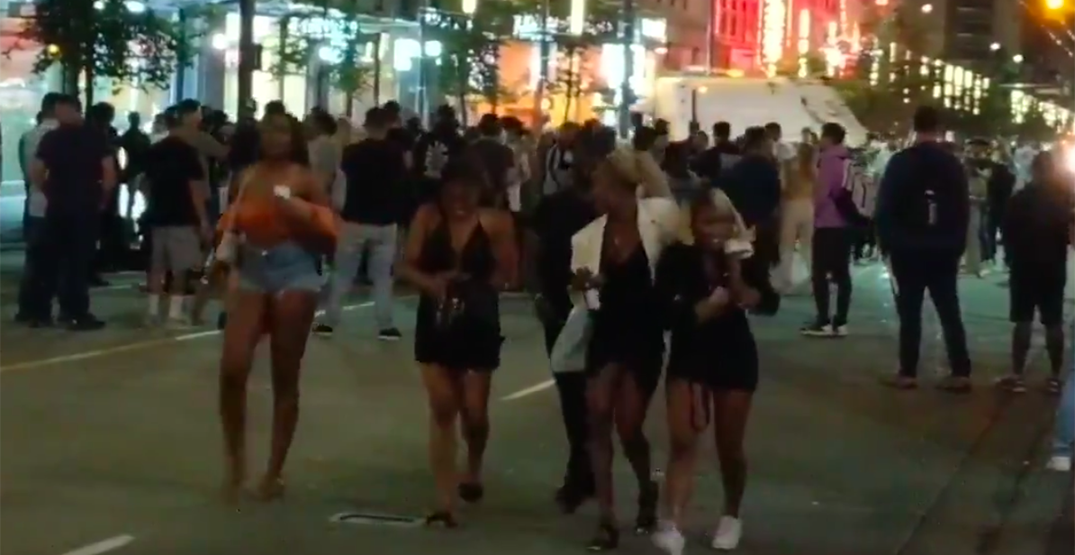 Crowds of partiers congregating on the Granville strip over the weekend prompted a response from the Vancouver Police Department.

Videos of the partiers gathering with limited physical distancing surfaced on social media and VPD Constable Tania Visintin confirmed with Daily Hive that officers were on scene to shut it down.

“On Friday evening, VPD officers did block off the 900 block of Granville Street as they have done for a long time in the Granville entertainment district,” she said. “Shortly before midnight, a group of people had set up large speakers with music attracting people to congregate and dance to the music.”

This also included multiple DJs, who supplied the tunes.

VPD officers in the area reportedly stopped the DJs from playing and “shortly after the people stopped congregating.”

VPD Deputy Chief Howard Chow tweeted about the incident, highlighting that limited capacity inside the restaurants and bars leads to additional people on the streets.

Agree with you wholeheartedly. Still getting groups throughout evening congregating with music, buskers, etc. Doing our best to intervene and shut music down when groups form. Unfortunately, limited seats inside means more people outside. https://t.co/c4FE5u3PQ8

As of now, Visintin said VPD have not been issuing tickets for non-compliance with social distancing, rather focusing on education.

“The Province along with the PHO has taken the lead on this and officers specifically assigned to enforcement with the Province will be enforcing any social distancing law,” she stated.

Visintin added that VPD will continue to focus on public safety, prevention of crimes, and upholding the law.

“We will also continue to spread awareness and educate the community on the importance of social distancing,” she said.

The party took place despite warnings from both the BC health minister and the provincial officer of health, after modelling data showed new cases in the 20-29 age group were outpacing other age groups.

And it’s at these kinds of gatherings where “younger people are coming together and the virus is being spread,” she added.