For those that were kids and teenagers during the late-1990s, this is an event that probably needs little explanation. The Ash Ketchum’s and Pikachu’s of the world are coming to town; the Pokemon World Championships 2013 is coming to Vancouver from August 9 to 11. There is much to do over this 3-day weekend event: it is FREE for spectators to attend!

*The recommended days for public spectators to visit the Pokemon World Championship at the Vancouver Convention Centre are SATURDAY and SUNDAY.

Hundreds of elite players from over 25 countries compete in the Pokémon Trading Card Game (TCG) World Championship every year since it first began in 2004. The competition is a 3-day event and will be held at the Vancouver Convention Centre. This will be the first time the Championship will be held outside of the United States.

Although free for the public to attend, the invitation-only Championship is “the ultimate test of a player’s Pokémon TCG skills, strategy, and creativity. Champions are awarded the most prestigious title in the Play! Pokémon championship series: Pokémon TCG World Champion!”. At the 2012 competition in Hawaii, in addition to taking home a trophy the winners won a combined $100,000 in scholarships.

Don’t have an invite? Not to worry. On Friday, August 9, you’ll be able to play in a Last Chance Qualifier against other players from all over the world to earn yourself a place among the elite.

Not entering? The event is FREE for spectators with much to do. Even if you’re not competing in this year’s championship, you can still be a part of all the action at the Vancouver Convention Centre!

Game Freak and Pokémon Company personnel do autograph signings every year, a merchandise store will be selling exclusive Pokémon goods that will only ever be available that weekend, an exclusive event Pokémon will be available to download, events and activities will be running all weekend long, and of course this is the perfect place to bust out your Pokémon cosplay! The finals will be broadcast on giant screens just before the Closing Ceremonies so be sure to watch!

Nintendo’s Pokémon, a world of numerous species of “Pocket Monsters” where “Pokémon Masters” catch and train as many monsters as they can for battle, was at its peak a global children’s phenomenon during the late-1990s and early-2000s. With its iconic animated television show, movies, musicals, video games, toys, and the all-popular trading card game (even to this day), it has left a significant worldwide pop culture footprint. The TCG World Championship is one of the franchise’s most enduring legacies.

*The recommended days for public spectators to visit the Pokemon World Championship at the Vancouver Convention Centre are SATURDAY and SUNDAY.

RULES – Trading Card Game
Usual standard format (Modified): Your 60 card deck must only use cards printed from the Black & White set or later. Cards from previous sets that have the exact same name and effect text as a card from a current set may be used.

AGE DIVISIONS
Depending on your age, you’ll be placed into one of three age divisions to play in

Photo: “See You In Vancouver” during the Hawaii 2012 Championship Closing Ceremony. 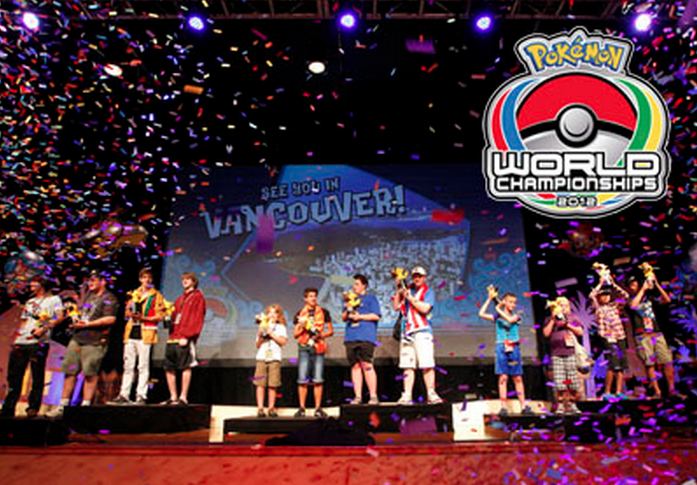