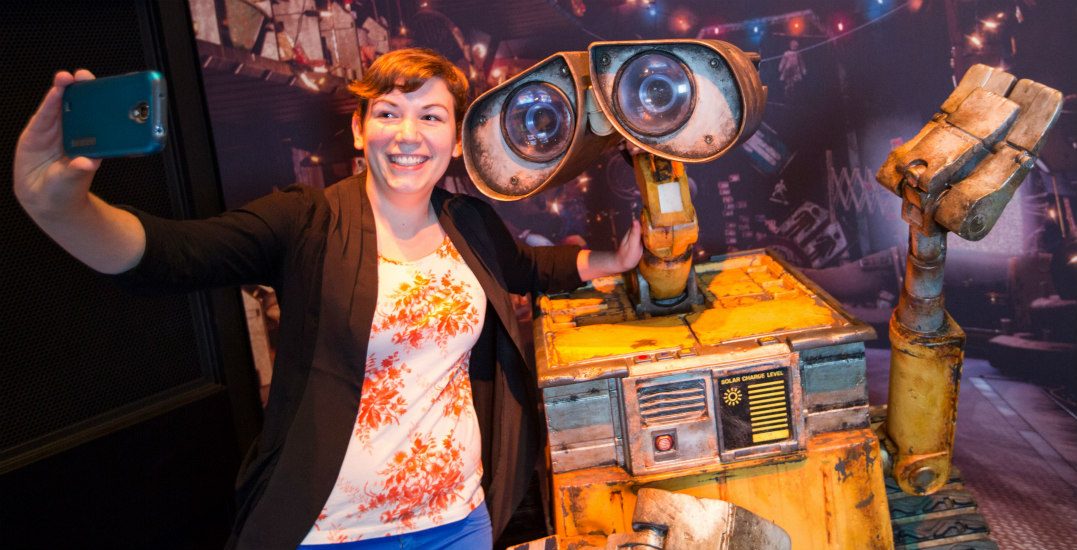 Photo by ©Nicolaus Czarnecki. All images courtesy of ©Disney/Pixar

With back-to-school just around the corner, a trip to Science World is a great way to make the most of these remaining school-free days!

And this summer, you have the rare opportunity to unlock the secrets behind your favourite animated movies at Science World’s new feature exhibition, The Science Behind Pixar, presented locally by White Spot restaurants.

Before you or your kids hit the books this fall, learn how Pixar’s artists are able to take a series of simple sketches and transform them into entirely new worlds. 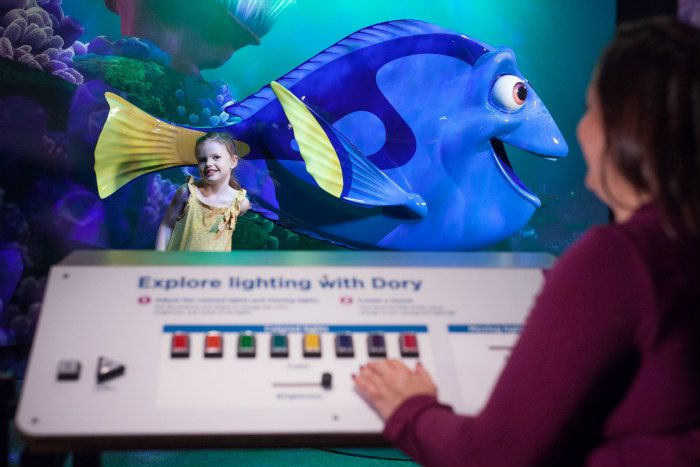 This exciting exhibition — which runs until January 6, 2019 — was created by the Museum of Science, Boston in collaboration with Pixar Animation Studios. The exhibition aims to give visitors a unique insight into the science and technology behind some of their favourite childhood (and let’s be honest, adulthood) films.

With more than 40 interactive elements and hands-on activities, you’ll gain incredible insight into Pixar’s production pipeline. You’ll even be able to listen to firsthand accounts from the studio’s production teams and engage in fun activities, like controlling the movements of a virtual school of fish and creating a 3D model using basic shapes.

The best part? You’ll get up close and personal with some of your favourite Pixar characters, including Buzz Lightyear, Dory, Mike and Sulley, Edna Mode, and WALL•E!

Let’s walk through the eight unique sections in this interactive exhibition.

This is your first glimpse at The Science Behind Pixar. Learn how modellers use digital sculpting to create detailed and realistic virtual 3D models of the characters you love so much. Once you’ve created a model, you can harness the custom software to create, rotate, move, and scale your shapes to create a complex 3D image. 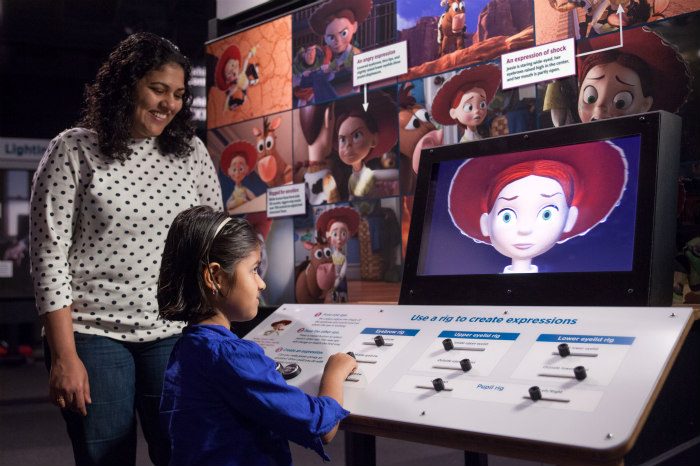 Use rig controls on Jessie’s face to create expressions/Photo by ©Michael Malyszko.

Here’s where you’ll learn all about digital rigs — or the virtual bones, joints, and muscles that allow models to move in believable ways. Visit the Arm Rigging Workstation and select a Pixar character to discover which of four arm rigs will produce movements that feel realistic.

While rigging controls the shape of a character, the surface appearance is developed and designed by surface artists, who ensure that characters such as Cars’ Lightning McQueen shine believably. In this section, you’ll be able to edit appearance variables such as colour, pattern, transparency, and reflectiveness to design a virtual sphere such as the one on the counter of the kitchen in Ratatouille.

Although Pixar films are animated, there still needs to be a set in which the story can take place and cameras available to capture it all. This area of the exhibition sheds light on the work of set designers and camera artists. With the Programming Natural Variety Workstation, you’ll get to generate a field of grass and then use a randomness selector to determine whether the blades are mostly alike or different. 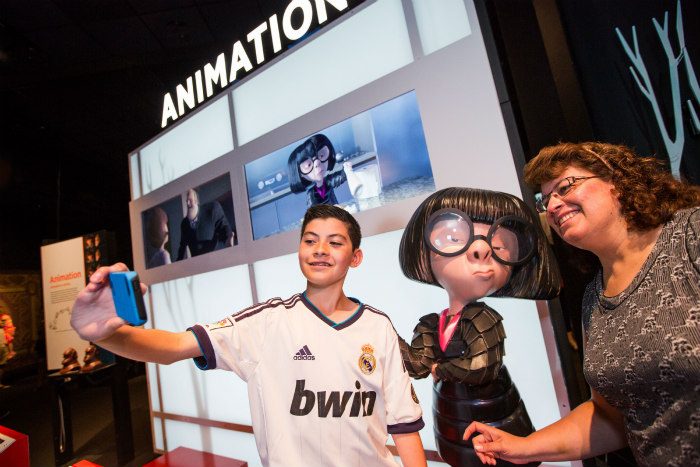 Take a selfie with Edna Mode/Photo by ©Nicolaus Czarnecki

The animators are the people who bring the story to life. They break down action sequences into a series of poses (called “key frames”) and position the characters to act them out. After this is completed, they use computer programming to describe how the object or character moves in each frame to ensure that it captures the correct emotion. At the Computer Animation Workstation, you can try your hand at animating Monsters Inc’s Mike Wazowski to make him wave at you!

While animators take care of a lot of the motion you see on screen, they’re not responsible for all of it. Some movement, such as that of hair and clothing, is the work of simulators. With the Crowd Simulation Workstation, you’ll simulate the motion of a school of fish by using sliders to vary the number of fish, the distance between them, and the direction they face. 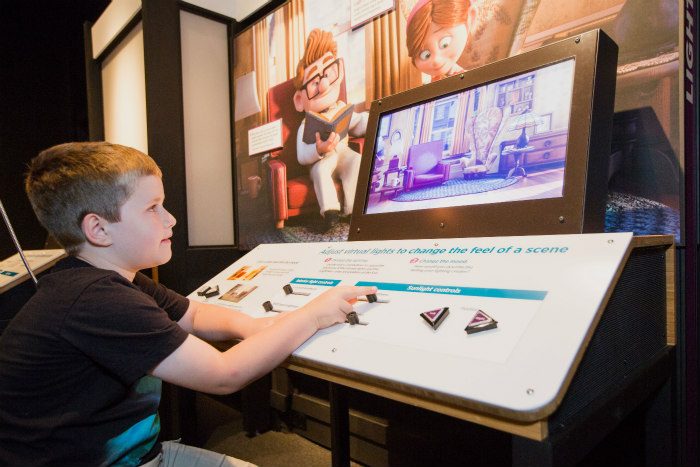 The way a scene is lit can affect the way the viewer reacts to it emotionally. Remember the peaceful appearance of the water in Finding Nemo? That was achieved with lighting effects! Learn all about how lighting designers program the different effects of lighting, such as shadows and reflection, in this section of the exhibition.

Rendering is the final step in the animation process — and fittingly, your final section to explore. This is an incredibly long process of determining the color of every pixel in every frame, and only once it’s over are the filmmakers able to see what everything is going to look like.

At the Rendering Workstation, you’ll get a taste of what balancing render time and image quality is like. Take the opportunity to control some elements of an image from Ratatouille to see how they affect both the quality of the image and the amount of time it takes to render the final picture.

The Science Behind Pixar, presented locally by White Spot restaurants, awaits you at Science World this summer. Take a day to explore the fascinating world of Pixar — it may even inspire you to become one of the animation wizards who bring these beloved characters to life!

The Science Behind Pixar was developed by the Museum of Science, Boston in collaboration with Pixar Animation Studios. All Rights Reserved. Used Under Authorization. Images ©Disney/Pixar.