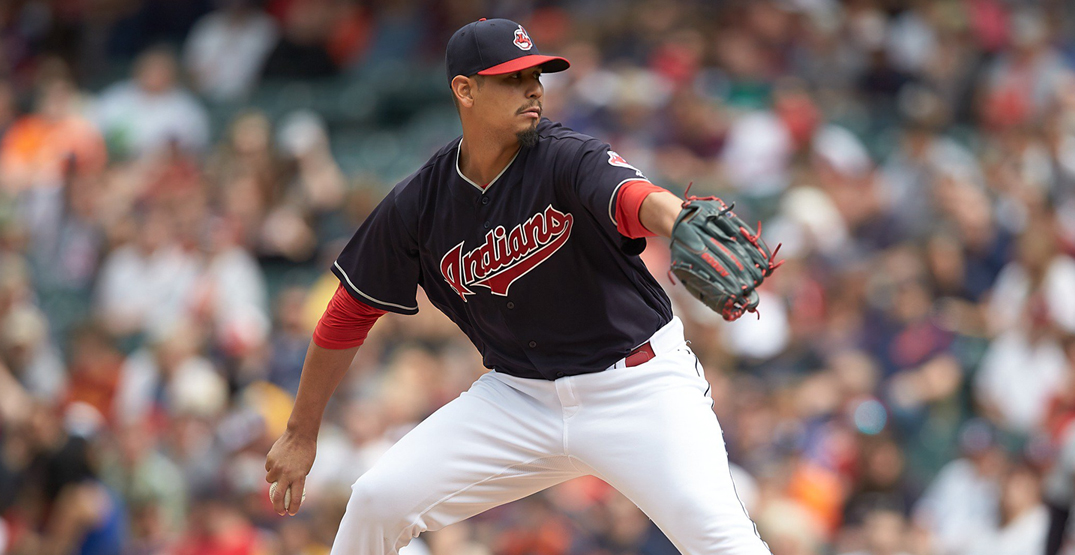 Depending on who you ask, the Toronto Blue Jays are loading up for one monster of an offseason. Flush with money to spend and with enough prospect capital to swing a blockbuster trade, this is a team poised to make some big moves.

The #BlueJays, rival executives say, could be as aggressive this winter in free agency as any team in #MLB .

Not just in free agency either, also in the trade department. The market is flush with free agents, but cornering the trade market is another way the Blue Jays could improve their roster this winter.

The Blue Jays made their first move of the offseason by re-signing Robbie Ray to a one year-$8 million contract, but they’re far from done. By adding Ray to their pool of pitchers, maybe they can hone in on some pitching trade targets.

The pitcher affectionately referred to as “Cookie” would be a very sweet starting pitcher upgrade for one lucky team this offseason. Carlos Carrasco has three years and $38 million left on his contract extension with the Cleveland Indians.

Not to use the “Cleveland connection” as a crutch, but Mark Shapiro and Ross Atkins are very familiar with Carrasco, since they were in the Indians’ front office when the team acquired the right-hander at the 2009 trade deadline.

In his 11 years in the big leagues, Carrasco has been one of the most underrated pitchers in the game, only finishing as high as fourth in the Cy Young voting in 2017. Aside from his shortened season in 2019, he’s posted an ERA below 3.63 in six of the last seven seasons.

At 33 years old, he’s the elder statesman among this group, but there’s something to be said about veteran savvy and consistency throughout his career; two things the Blue Jays’ starting rotation could use more of.

German Marquez is one of these rare case studies where you’d never know he pitches half his games in one of the most hitter-friendly ballparks in baseball. In his five-year career, the Coors effect has not affected his overall results (he’s given up 43 home runs at home, and 43 home runs on the road).

Marquez is especially attractive to potential suitors because of his three-pronged benefits; he’s young (at only 25 years old), his numbers look great, and he’s under team control for four more seasons.

The Rockies’ right-hander also led the league in innings pitched, games started and batters faced. This wouldn’t be the first time the Blue Jays and Rockies met up for a trade, and just like the Tulo deal, this one has the potential to be a blockbuster if they involve several players.

If at first you don’t succeed, try, try again. The Blue Jays attempted to land Musgrove at the 2020 trade deadline, but the deal fell through with the Pirates. Maybe it makes sense to revisit the framework and hammer out a deal for real this time?

Musgrove’s peripheral numbers look decent, and he’s nothing if consistent, as his ERA has never spiked above 4.77 in his five-year career, and his ERA+ has always hovered between the 86-116 range.

He doesn’t profile as a front-line starter, but Musgrove would be an improvement over every starter in the Blue Jays depth chart aside from Hyun-Jin Ryu and potentially Nate Pearson. Musgrove figures to be a reliable, middle-of-the-rotation arm.

It’s been a long, winding road for Marco Gonzales, but after being drafted by two organizations early in his career, the left-hander found his footing at the top of the Seattle Mariners starting rotation.

He doesn’t boast big strikeout numbers, but the 28-year-old looks very interesting for a team on the cusp of contention like the Blue Jays. If the Mariners figure he looks valuable as a trade chip, the Blue Jays should line up and make a decent offer for this mid-rotation starting pitcher.

One of Brodie Van Wagenen’s (the Mets’ former GM) first orders of business was acquiring Edwin Diaz and Robinson Cano in December 2018. Now that the Mets cleaned house, perhaps one of the first mandates for the new GM is finding a trade partner for “Sugar.”

Diaz struggled during his first year in a Mets uniform in 2019, but returned to his All-Star reliever form during the pandemic-shortened season in 2020. If the Mets shift into rebuilding mode under this new ownership group, a reliever like Diaz suddenly turns into a trade chip.

It’s a dangerous exercise to trade for impact relievers, but the Blue Jays need all the help they can get at the back end of their bullpen. After losing Ken Giles and Anthony Bass, adding someone like Diaz would invigorate that relief corps.