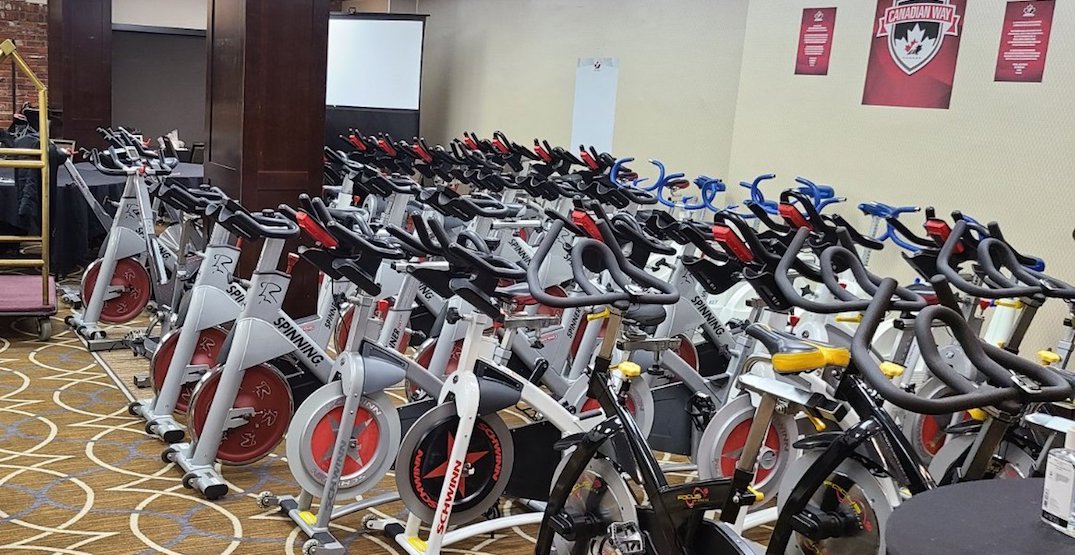 A Red Deer pilates studio owner has saved the day — 14 days, to be exact — for Canada’s national junior team.

Training camp came to a halt for Team Canada last week in the Central Alberta city, after two players and a staff member tested positive for COVID-19. All players and staff were deemed to be “close contacts,” forcing everyone into 14-day quarantine.

That means that everyone — players, coaches, and staff — have been confined to their hotel rooms since November 23. With the World Juniors set to begin on Christmas Day in Edmonton, this is clearly a stumbling block for these fine-tuned athletes.

Players have had a great attitude throughout this pause in action, according to head coach Andre Tourigny.

“We’re really impressed by the way the players can adapt. It’s unbelievable. You put a problem and if you have the right attitude, you find solutions,” Tourigny said during last week’s media availability.

The team has found a number of ways to stay together, even while they’re apart. There will be guest speakers virtually addressing the team every day, Tourigny said, as well as group activities like trivia and poker, as decided by the team’s social committee.

“The number of solutions and ideas we had… I was overwhelmed by the creativity of the players.”

Players not only need to fight boredom while locked in their rooms, they need to stay in tip top shape. Their first pre-tournament game is in three weeks, with their tournament opener beginning five days after that.

Enter Colleen Manning, owner of Studio Pilates Fitness & Wellness in Red Deer for the past 19 years. Manning had already reached out to Hockey Canada prior to camp, offering spin and yoga for the team.

“I knew there were so many bikes in the city that aren’t being used [since] we’re all shut down right now,” said Manning in an article posted on the Hockey Canada website.

Within 36 hours of the team entering quarantine, Manning had helped to source bikes for every player and staff member to have in their room.

A total of 69 spin bikes were collected from Manning’s studio, the Red Deer Rebels WHL team, Notre Dame High School, the City of Red Deer, and the Hockey Canada gym located in Calgary.

“I came up with the concept of using a towel to create drag and rotational force,” said Douglas. “You can feel the force through the hotel halls as towels slam onto the bed or as players land jump squats.”