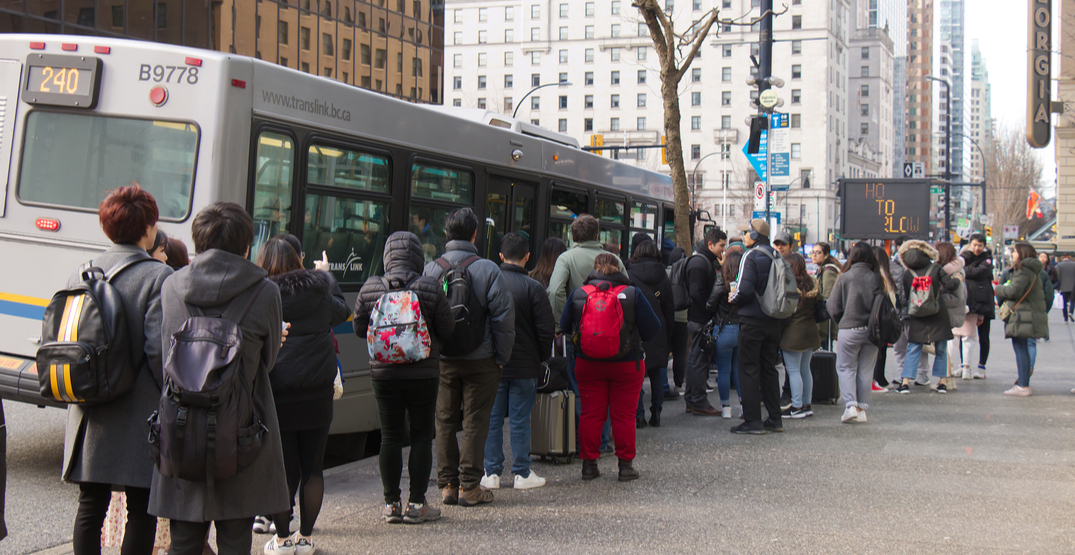 A long line of passengers waiting to board a TransLink bus in Downtown Vancouver. (Shutterstock)

A lack of mask-wearing and physical distancing has prompted a Vancouver woman to launch an online petition calling for stricter health and safety measures on public transit.

Kelsey Rae says that like many other Vancouverites, she takes public transit on a daily basis. Most recently, however, she’s noticed that fewer passengers are wearing masks or trying to distance themselves from others.

“I haven’t seen a lot of physical distancing and a lot of mask-wearing even though they’re encouraging it,” she told Daily Hive in an interview.

“The other day I was taking my bus and we were crammed,” she explained. “Absolutely no distancing on that bus. That made me very angry and that’s when I went home and started the petition.”

“TransLink BC claims to have a plan in place but it doesn’t seem like it’s being enforced,” says the petition description. “I want to see this ‘plan’ enforced and have greater precautions… we should not have to feel unsafe using an essential service.”

Rae said that so far the petition has been met with a lot of support. It’s nearing its goal of 500 signatures with more than 400 at the time of writing. She also said that the feedback on social media has been very positive.

She’s not the only person who thinks that masks are essential in public transit, either. Last week, Provincial Health Officer Dr. Bonnie Henry said that “absolutely everybody” on transit should be wearing a mask.

Henry said she recognizes that enforcement of a guideline like this is a challenge and that “we know that sometimes it’s hard to tell when people can or can’t wear a mask – it may be around physical disability.”

However, she said, “there are very few medical reasons that people can’t wear masks.”

Rae said she understands that mask-wearing is complicated to enforce and notes that physical distancing is one of the main safety measures that she’d love to have back.

And even if British Columbia were to continue to see a spike in cases, Rae has no other choice than to continue using the essential service.

“I really have no other choice but to use transit,” she said. “I’m kind of stuck in that aspect and that’s one of the other reasons I wanted to start this and get some eyes on it.”

“Cases are going up and it doesn’t seem like we’re going to lock down again, so we’ve got to take as many precautions as we can.”