A new study jointly-released by the Canadian Taxpayers Federation (CTF) and Americans for Tax Reform (ATR) reveals that Montréal continues to be the least financially attractive location in the NHL for players when it comes to personal income taxes.

Vancouver faired much more favourably at seventh place with a relatively low tax rate of 44.8 per cent compared to Montreal’s 30th placing due to its 53.9 per cent rate.

The CTF looked at NHL team salary spending, personal income tax rates in the relevant province or state, and the “true cap,” which takes into consideration these rates. The CTF also examined the tax impact of various off-season trades on players’ incomes.

Winger PA Parenteau will pay an additional $349,535 in taxes after being traded to the Canadiens, moving from Colorado’s 46 per cent tax rate to Quebec’s 54 per cent rate. At the other end of the spectrum, former Ottawa Senators centre Jason Spezza can expect to see tax savings of $394,732 after being traded to the Dallas Stars, moving from Ontario’s 49 per cent rate to 41 per cent in Texas.

“The numbers don’t lie; NHL players take a financial hit to play in certain jurisdictions,” said paper author and CTF Research Director Jeff Bowes. “Obviously, there are other factors at play besides taxes, but the fact remains that disparities in tax rates leave some teams at a major disadvantage.”

While there is a salary cap in place, income tax differences mean that some locations have a distinct advantage over others. Edmonton and Calgary’s “true cap” (after income taxes) is a league high of $39.6 million, Vancouver at $35.4 million, Winnipeg at $34.8 million, Toronto and Ottawa at $33.1 million and Montréal at $29.6 million.

“NHL players are just one example of highly skilled workers who have a choice of where to work” added CTF Federal Director Aaron Wudrick. “The same principles apply far beyond professional athletes, but also for doctors, engineers and CEOs of major companies. If high tax rates make it more difficult to attract free-agents in the NHL, it’s not a stretch to believe it’s also be hard to attract other highly skilled workers. Governments need to keep that in mind when they’re considering the impact of tax rates on attracting top talent.” 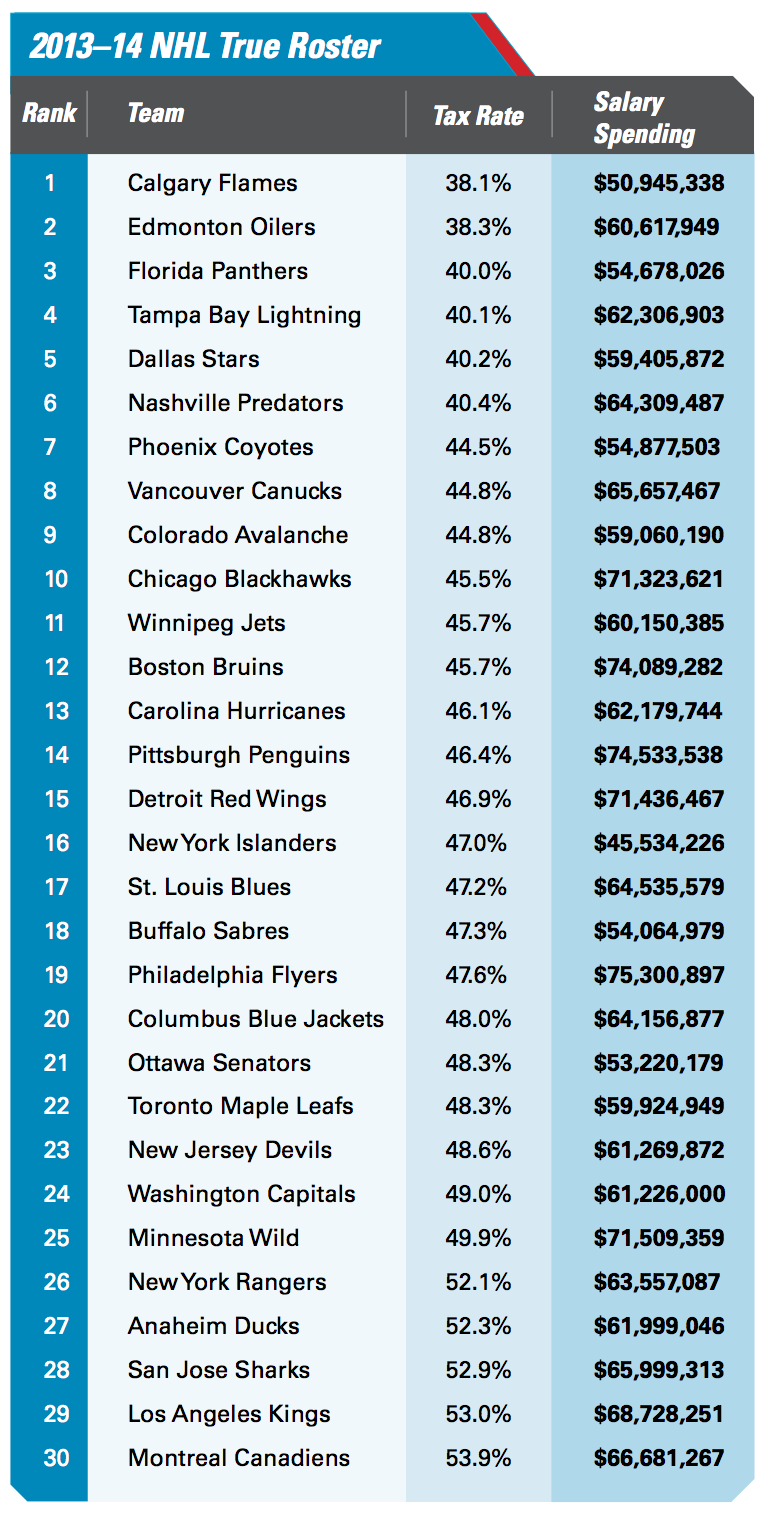