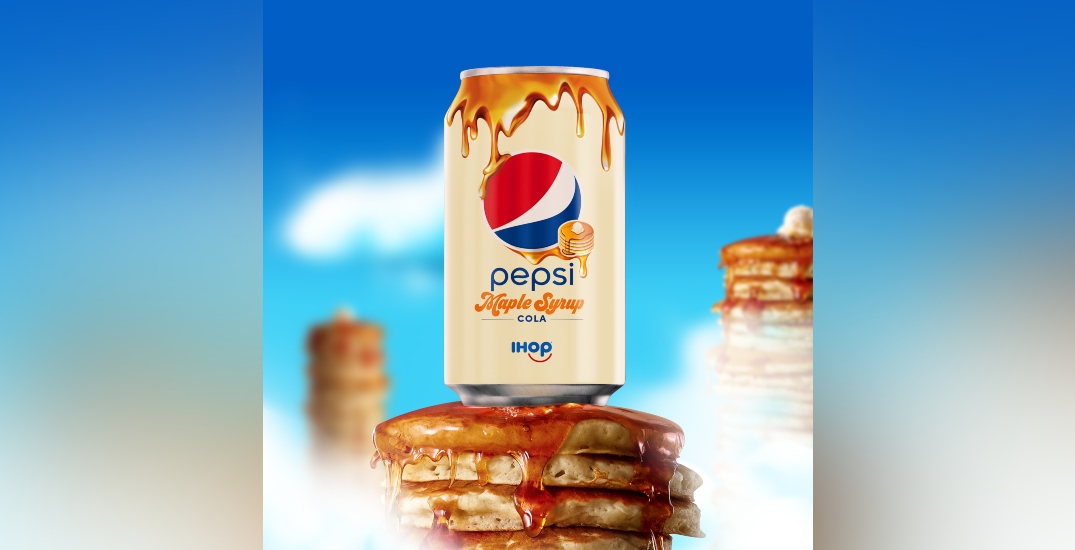 It’s always nice to play well with others, but some collaborations aren’t always meant to be.

Limited-edition flavours are nothing new, but sometimes maybe you should quit while you’re ahead. Here’s looking at you, Pepsi.

The soda brand giant has partnered with pancake giant IHOP for a questionable new product: Pepsi Maple Syrup Cola. The new cola flavour is not available in stores, at any IHOP location, or in Canada. (You know, the maple syrup country of the world…)

Pepsi Maple Syrup Cola is a “highly limited-edition” promotional item that will only be available through a social media giveaway.

Two thousand Pepsi drinkers will be chosen to receive free 12-ounce cans of the soda, by using the #ShowUsYourStack hashtag, showing off their best stacks of pancakes.

In a phone call with Daily Hive, a rep for Pepsi Canada says the new flavour will not be available in the Great White North. “Unfortunately, these products are limited to the US only,” says the rep. “After that, the company will see how it’s received and will consider launching the product in Canada and Latin America.”

Some people on the internet weren’t very supportive of Pepsi’s new flavour attempt:

Y’all wild as hell out here. Just turning anything in these streets into a cola.

As an amateur maple syrup producer… I see this as an abomination! pic.twitter.com/1L6NUAvQmP

Your scientists were so preoccupied with whether or not they could, they didn’t stop to think if they should.

Do you have diet syrup? https://t.co/ZQQKyqevxL

In the meantime, Canadian Pepsi fans can enjoy a throwback version of its iconic look from the late 80s and early 90s — with zero maple syrup.