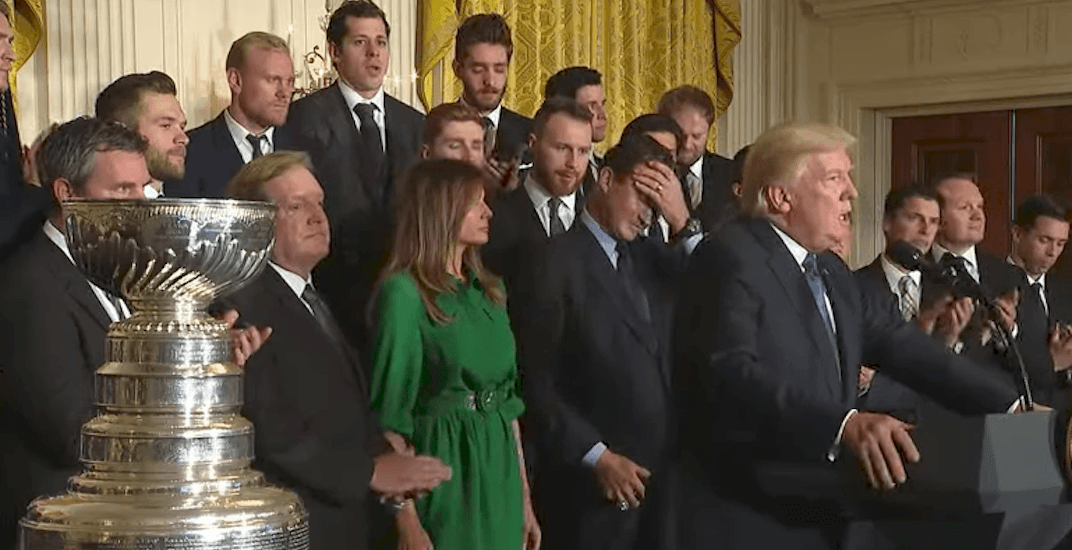 You knew it was going to be cringeworthy, and it didn’t disappoint.

With an uncomfortable spotlight on them, the Stanley Cup champion Pittsburgh Penguins visited the White House on Tuesday. In any other year, this would have been a celebration of their accomplishment, and nothing more.

With Donald Trump in the White House, the Pens had a decision to make. This is a divisive President.

Unlike the Golden State Warriors, the Pens chose to visit Trump.

“By the way, everybody wanted to be here today,” US President Donald Tump said to begin his speech. “And I know why.”

The Penguins wanted nothing to do with making a political statement, in any direction. It’s the hockey way. Follow the rules, don’t stand out.

This is the statement the team gave on September 24th, explaining their decision:

The Penguins and Crosby have received an enormous amount of criticism for visiting the White House this year. For many people, you’re either with Trump, or you’re against him.

Sidney Crosby, perhaps more than anyone, wanted nothing to do with picking a side.

“From my side of things, there’s absolutely no politics involved,” Crosby said on Monday. “Hopefully it stays that way. It’s a visit we’ve done in the past. It’s been a good experience. It’s not about politics, that’s for sure.”

Nobody handed Trump the Stanley Cup. The Penguins didn’t present the President with a jersey with his name on it. They didn’t get together to pose for a photo.

The team’s most prominent players, Sidney Crosby, Evgeni Malkin, and Phil Kessel were tucked away in the back row.

“Come here,” Trump said, motioning for Crosby to come to the front.

Crosby didn’t move from his spot in the back row.

Shy? Or was he trying to avoid a photo op?

In their visit to the White House last year, Crosby was front and centre. He stood with Gary Bettman, in front of his teammates, and presented Barack Obama with a custom Penguins jersey.

This year, the White House visit appeared to be a chore, not a celebration, with the team wanting to stay out of controversy.

Most players appeared to smile politely when called upon. Penguins owners Mario Lemieux and Ron Burkle stood at the front.

The Penguins’ official Twitter account ignored the entire visit this year. That’s quite the departure from last year, when the team essentially live-tweeted their White House experience.

On Snapchat? You'll definitely want to see the stories from "Penguins", "The White House", and "NHL". 🙌🏼 #PensAndPOTUS pic.twitter.com/Jos0TZFXLJ