It’s midday and sunny, but inside the Granville Room it’s dim and smoky today. No one is puffing on an illicit cigarette, though. At the bar, two of Vancouver’s top bartenders are refining a flavoured smoke that will be worked into one of their creations for the upcoming Monogram Dinner By Design Cocktail Art event.

The two libation scientists are Trevor Kallies (Bar & Beverage Director for the Donnelly Group) and Julia Diakow (The Rosewood Hotel Georgia), and they are part of a team assembled by Absolut Brand Ambassador Jacob Sweetapple, who, along with The Fairmont Pacific Rim’s Grant Sceney and Gez McAlpine of the Keefer Bar, are concocting some amazing avant-garde beverage for an art-inspired evening.

Celebrating the artistry of the cocktail, the event is a showcase not only for some exciting design elements, including two custom bars, but also a chance for some of Vancouver’s bartending elite to present their innovative drinks to a stylish crowd.

Cocktail Art is Sunday, September 21, but the team has been planning for weeks, and are working out the kinks for each of the drinks, as well as keeping some of the details top secret until the weekend. They’ve invited a few of us in for a peek and a sip during the waning hours of their lab time, and Sweetapple walks us through the event’s drink “setlist.”

This year’s efforts are a series of five cocktails wherein the vessel is part of the art and function of the drinks. At a punch station, a cut crystal bowl will be embedded in ice, to keep the integrity and temperature of the drink, which Sweetapple says will be a mix of stone fruit, herbs, spices and an aroma element. They’re creating a custom flavoured incense that will enhance the drinking experience through the sense of smell. 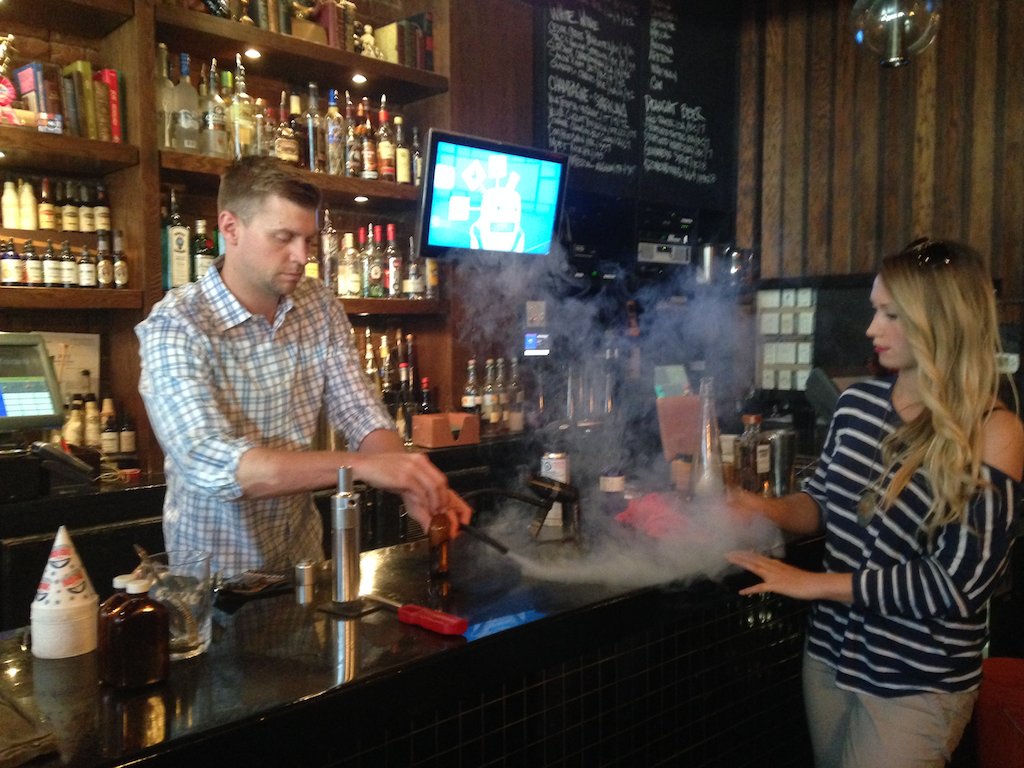 Scent is also a star player in a cocktail that will be served up bottled, thanks to an infusion of coconut and pineapple smoke. The drink will feature citrus, pineapple syrup, and Absolut Elyx vodka. The bartenders will open the bottles and pass them to the guests, who will experience the mingling of the smoke and the liquid on their palates–straight from the bottle.

Sweetapple demonstrates the next drink, which features barrel-aged Absolut Elyx presented in a sphere of ice. Gingerly he shows us how they’ll tap into the ice wall with a syringe to inject the alcohol, then crack the globe open and serve. A deep, chilly, intense drink, with quite an incredible preparation, to say the least. (Just think about them getting over 300 of those frozen orbs to their station at the event!) 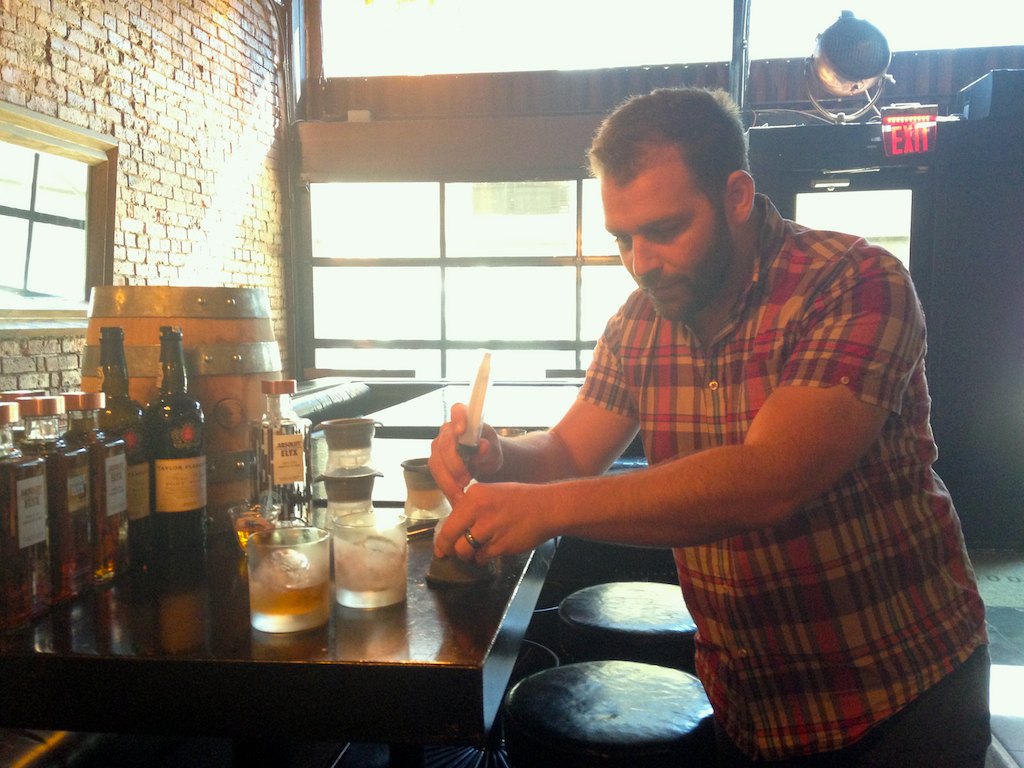 Lastly, we check out their take on a champagne cocktail, with a garnish of a red wax lip print that’s holding a boost of peach flavour. Press your lips against the food-grade lip stain on the rim (they’ll use a mold, so no worries about someone having smooched your glass) and drink the bubbles and vodka studded with an orb of peach sorbetto. 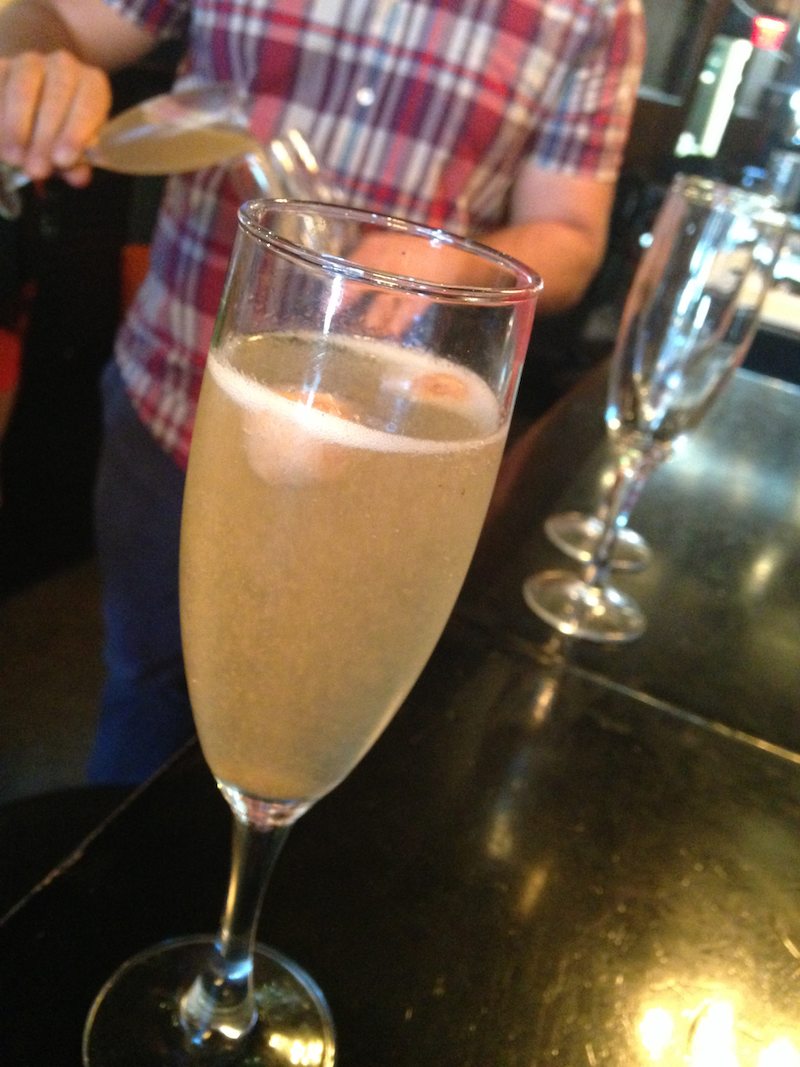 There will be one more treat for the Cocktail Art guest, but sadly it wasn’t ready for a taste test yet: A boozy sno cone! Amping up the interaction, guests will get to drink a grown up icy treat that uses flavoured ice so that there’s none of that letdown like when the sweet liquid melts away from the frozen water in a plain ol’ sno cone. Inspired by the ginger-lime-vodka combo of the Moscow Mule, this icy concoction will feature ginger “sno” topped with booze and floral paper straw in the cute cone.

Sweetapple and his team are delighted to have the chance to show Vancouver’s imbibers the kind of “next-level cocktails” they’re working on these days around town.

Cocktail Art at CBC Studios (700 Hamilton Street) is a great opportunity to see and taste the work of these drink artists up close and in person, and the evening is fundraiser for a great cause, the Dr. Peter AIDS Foundation. Tickets are $50 and are available online. 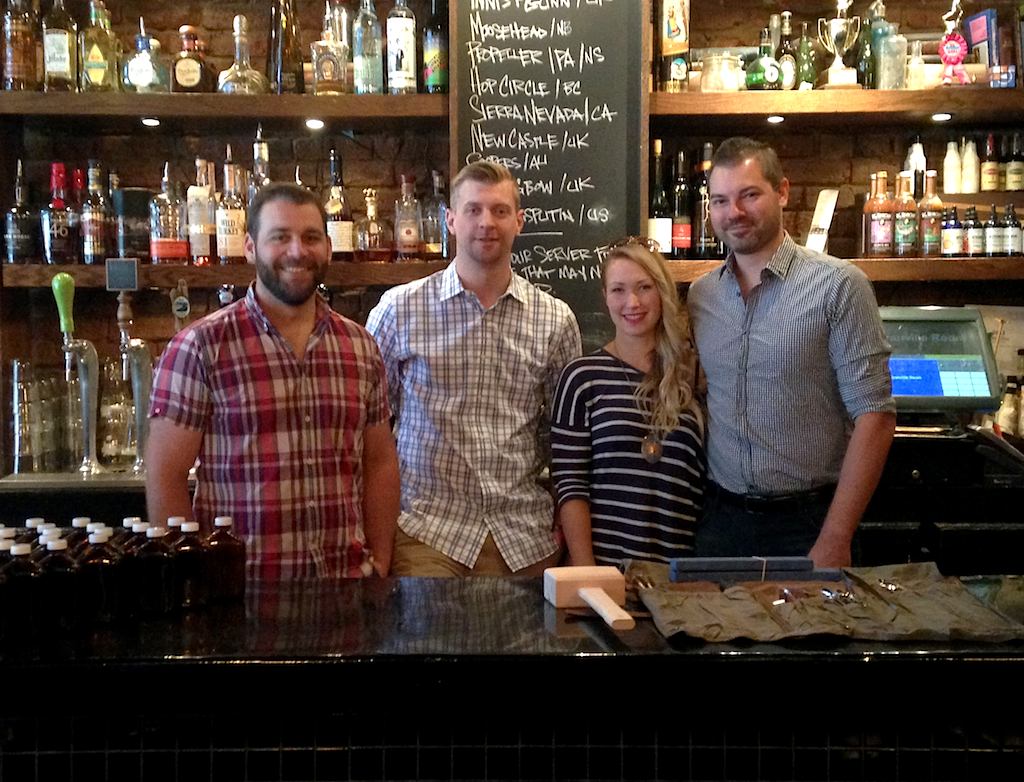 Sweetapple, Kallies, Diakow, and event organizer Tyson Villeneuve of The Social Concierge behind the bar at The Granville Room (Lindsay William-Ross/Vancity Buzz)