In The Peaceful Sea the audience were transported in Ferdinand Magellan’s adventure: the first circumnavigation of the globe.

Angela Ferreira, co-founder of Theatre Elsewhere, written and directed the play that was inspired by the reading of the books Magellan’s Terrifying Circumnavigation of the Globe: Over the Edge of the World by Lawrence Bergreen and Antonio Pigafetta’s diary of the journal.

With simple costumes and an almost empty stage, Ferreira was able to deeply immersed spectators into a creative exploration of Magellan’s challenge. Through simple props (for instance a rope became a drying rack or a deck), the music composed and played live on the Portuguese guitar by Elliot Vaughan, and the choreography by Iris Lau, Ferreira created a complete show that mixed humour, irony and seriousness.

The Peaceful Sea, a title that represent the literal translation of the Portuguese words Oceano Pacifico (Pacific Ocean), was first performed in Victoria in 2014. The play covered Magellan’s journey in its ambiguities, enlightening moments that people usually don’t remember. However, the play was not just an historical reconstruction of events since each character had a personality and developed during the hours of the play. 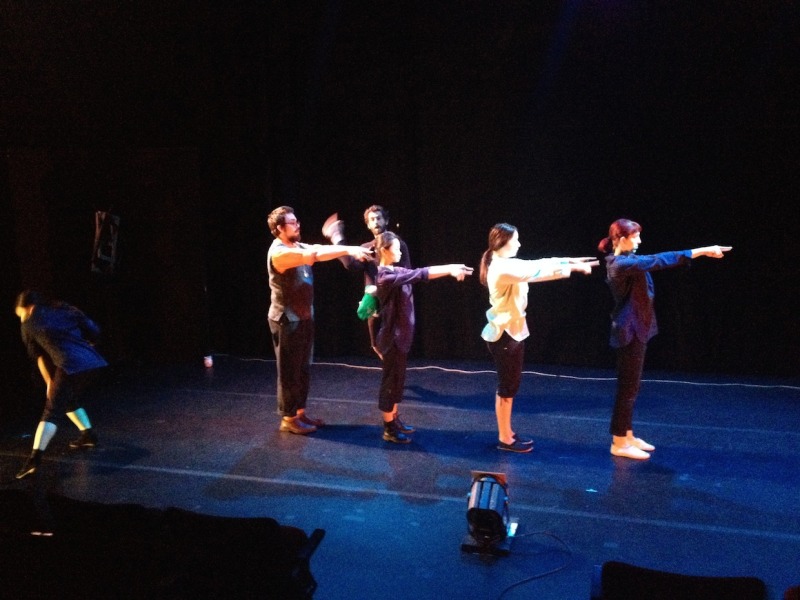 With the exception of Magellan (Carmine Santavenere) all the other five performers, Elysse Cheadle, Iris Lau, Shannon Lee, Sean Marshall Jr., Manuela Sosa, constantly changed roles marked by slight modifications in their costumes. This choice kept the audience focused and into the plot.

The Peaceful Sea honoured the history of Magellan’s journey and remained us the importance of memory. In a wonderful balanced between text, music and movements, the play captured the spectators and constantly maintained their attention, thanks to hilarious moments that always happened in the right moment.

The Peaceful Sea was presented at the rEvolver Theatre Festival from May 21-24, 2015.