Pavel Bure’s No. 10 was retired by the Vancouver Canucks in a emotional pre-game ceremony before Saturday night’s match against the Toronto Maple Leafs.

The ‘Russian Rocket’ is now the fourth Canuck player to have his jersey retired. His No. 10 now hangs prominently up high in the rafters of Rogers Arena, joining Stan Smyl’s No. 12, Trevor Linden’s No. 16 and Markus Naslund’s No. 19. Both Smyl and Naslund were in attendance for the ceremony, while Linden sent his regards while out of town on business.

“It is hard to believe it has been almost 22 years since I played my first NHL game here in Vancouver,” said Bure to a capacity crowd that chanted ‘Bure, Bure, Bure’. “I will never forget that. I was very lucky to play in such a wonderful city with wonderful people who gave me such great support. The people of Vancouver have a big heart.”

In his speech, he also thanked individuals who made his career possible, including both the Griffths and Aquilinis families, former agent Mike Gillis, former Canucks coach and general manager Pat Quinn, and former Canucks teammates including old friend Gino Odjick.

“To my old teammates over the years, I wouldn’t be standing here without you and I share this honour with each one of you. Thank you guys,” he said.

Before stepping off the podium for the jersey raising, he gave a heartfelt thank you to Canucks fans and Vancouverites. “Finally to all of you, the fans here in the stands and watching on TV, we played for you,” said Bure.

“Thank you for all the cheers, thank you for all the support over the years. I will never forget those years we spent together. I made my great friends here in Vancouver… I especially remember our Stanley Cup run in 1994. You were there for us every night, and you carried us when we needed you the most. It is one of my best memories. Nobody deserves the Stanley Cup more than you, and it’s going to happen soon. I know it will, right here on this ice: mark my words.”

Later in the evening, building on the momentum and spirit of Bure’s ceremony, the Canucks defeated the Leafs 4-0.

The Moscow, Russia native also ranks top five all-time in game-winning goals (32), goals (254) and hat tricks (9). Bure shares the franchise lead in playoff goals alongside Trevor Linden, registering 34 in 60 playoff games with Vancouver. In 1994, his 16 playoff goals set a franchise record for most playoff goals in a post season and helped Vancouver to within one win of a Stanley Cup Championship. 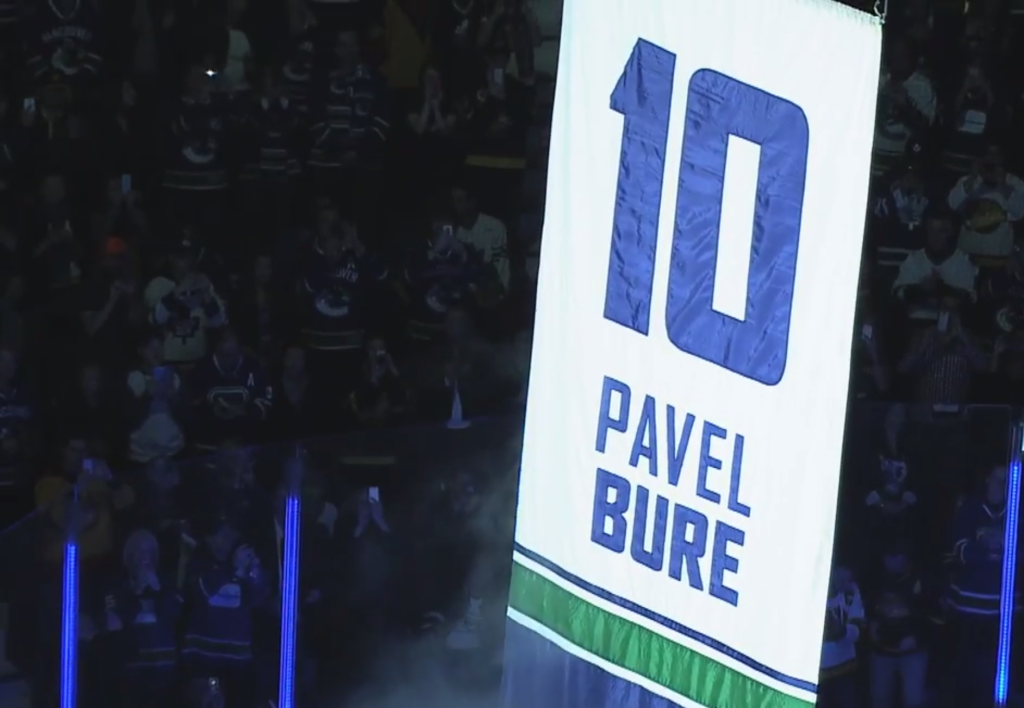